Ocean acidification (OA) is rapidly emerging as a significant regional and global threat to ocean ecosystems and fisheries.  Globally, it is driven by the emission of CO2 into the atmosphere, which is then partially absorbed by the oceans.  In this regard it can be viewed as a long-term climate change stressor similar to sea level rise and increasing sea surface temperatures, with dramatic consequences for key marine and coastal organisms highly likely to occur well before the end of this century.  Local factors, such as nutrient and organic loading into coastal waters, can drive acidification locally, on top of the global signal, complicating adaptation.

In August 2014 the United States of America and New Zealand, in partnership with SPREP, hosted a two-day workshop on Ocean Acidification: State of the Science Considerations for Small Island Developing States, as an official side event to the 3rd UN SIDS Conference in Apia, Samoa. This workshop identified the need for more local research and monitoring as well as capacity building and coordination at national and regional level as well as the need for an integrated approach to monitoring, resilience building strategies, and practical adaptation strategies.  These findings were subsequently recorded in the ‘Samoa Pathway’ SIDS Conference outcome document.

As a follow-up to the SIDS International OA workshop, New Zealand is supporting the Pacific Partnership on Ocean Acidification, an NZD$1.8m project aimed at building resilience to OA in the Pacific Islands region. 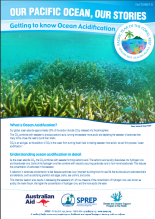 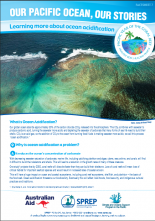