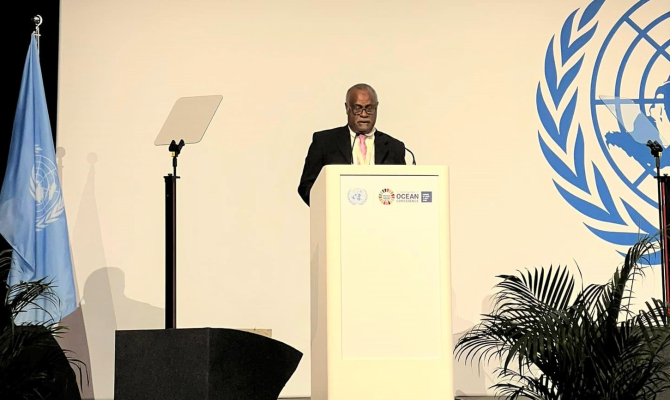 “We reach out the hand of friendship to all those who may wish to join us in taking a holistic, integrated approach to protecting human rights from climate change impacts as well as the survival of our oceans.”

30 June 2022, Lisbon Portugal, UNOC 2022 - In a David versus Goliath move, Vanuatu has stepped up to the global community to seek an Advisory Opinion on the legal implications of climate change.

To make this happen, Vanuatu needs the majority of countries at the UN General Assembly this year to instruct the International Court of Justice (ICJ) to do so.

An advisory opinion is legal advice provided to the United Nations, or a specialised agency, by the ICJ, in accordance with Article 96 of the UN Charter.

At the second UN Ocean Conference in Lisbon, Portugal this week, Vanuatu took to the global stage seeking support for this cause. Climate change is the greatest threat to the security and livelihoods of Pacific island people who live on the frontlines of these impacts.  While contributing less than 0.03% to the world’s total greenhouse gasses, the Pacific Islands are amongst the most vulnerable to its effects.

For Vanuatu, this is compounded as the world’s most at-risk country for natural hazards according to the 2021 UN University World Risk Index. Vanuatu has also been consistently ranked as the country with the highest disaster risk worldwide by the Institute for Environment and Human Security.

Without rapid and far-reaching action, low-lying atoll States like Vanuatu are predicted to be rendered uninhabitable by mid-century, threatening the very existence of their cultures, statehood, and sovereignty.

“This is not a court case, and we do not seek to assign blame.  But we do seek a credible way to bolster climate ambition moving forward to save the Paris Agreement and our blue planet,” said the Minister of Climate Change of the Republic of Vanuatu, Hon. Silas Bule Melve.

“In this regard, Vanuatu humbly asks for your support when we table this Resolution at the 77th session of the UN General Assembly.  It is high time we bring to bear the full weight of the UN family to address the climate crisis in our Oceans.  Support for this UN ICJ pathway has been expressed by nations from across the world, by civil society from across the globe and especially by our young people.”

Youth and grassroots efforts began the movement advocating for an ICJ Advisory Opinion of which support has grown consistently over the past year.  At the thirty-third inter-sessional Conference of Heads of Government of the Caribbean Community in March this year, Heads of Government have indicated their support for Vanuatu in its pursuit of an Advisory Opinion from the International Court of Justice.

“Climate change is the single greatest threat facing the Blue Pacific and our global oceans.  We simply cannot continue with business as usual.  The window to act will have closed by the end of this critical decade,” said Minister Bule.

“For our future, Vanuatu needs serious action from all States.  We must see transformational action to protect our coral reefs, our coastal environments and the fundamental human rights of all of us who depend on them.”

Our ocean, as an interconnected resource to all living things, has strong linkages to our ocean.  Having absorbed almost a third of all emitted carbon dioxide and over 90 percent of the world's excess heat, our ocean is our greatest climate regulator.

Action must be taken on all fronts, to protect our ocean which is so much more than a resource for Pacific Islands people.  It underpins Pacific survival as a source of food and livelihoods, beyond that the ocean plays a central role in our Pacific identity.

Recognising this, Vanuatu has made progress in its commitment to reverse the decline of the ocean’s health.

“After nationwide consultation on the effects of plastic pollution on marine life, we have now banned almost all forms of single-use plastics.  We call on all Governments to take similar actions to achieve plastic-free oceans.  We have also undertaken extensive marine spatial planning, down the level of our chiefs and customary authorities, in order to prioritise ocean investments as well as identify major gaps in means of implementation, technology, and capacity.  Vanuatu is confident that it has acted with the maximum ambition to conserve and sustainably manage our oceans in line with SGD14 and reverse the decline in ocean health,” presented the Minister.

“Vanuatu welcomes the partnerships and support that has been offered to date towards the implementation of our Ocean Governance Framework.  We reach out the hand of friendship to all those who may wish to join us in taking a holistic, integrated approach to protecting human rights from climate change impacts as well as the survival of our oceans.”

The high-level statement made by Vanuatu to world leaders took place on 29 June 2022 by Hon. Silas Bule Melve, Minister of Climate Change of the Republic of Vanuatu.

The Second UN Ocean Conference is hosted in Lisbon, Portugal from 27 June to 1 July 2022.  The Pacific Islands are represented by a strong contingent, which includes the Leaders from Fiji, Palau and Tonga.  Also present and engaged are the Cook Islands, Federated States of Micronesia, Fiji, French Polynesia, Kiribati, Palau, Papua New Guinea, Republic of the Marshall Islands, Samoa, Solomon Islands, and Tonga, Tuvalu and Vanuatu.