The project « Pacific Ecosystem-based Adaptation to Climate Change – PEBACC+ » is a regional project of the Kiwa Initiative and SPREP has been granted €4M by the Kiwa Initiative through the Agence française de développement (AFD) and €1,8M by the French Facility for Global Environment (FFEM) for its implementation. This 4-year project seeks to strengthen the resilience of ecosystems, economies and people in Fiji, Vanuatu, Solomon Islands, New Caledonia and Wallis and Futuna to the impacts of climate change. The specific objective of the PEBACC+ project is to develop, sustain and institutionalise the ecosystem-based approach to climate change adaptation in the target countries and territories.

This project is a continuation of the Pacific Ecosystem-Based Adaptation to Climate Change (PEBACC) project, funded by the International Climate Initiative (IKI) and implemented from 2015 to 2020 by the Secretariat of the Pacific Regional Environment Programme (SPREP) in Fiji, Vanuatu and Solomon Islands.

The PEBACC project developed and implemented a systematic and participative approach to analysing climate and non-climate threats as a basis for adaptation planning in several pilot sites. This work has led to the development of comprehensive master plans in close collaboration with stakeholders and local communities.

Concrete ecosystem management and protection actions have already been completed at several demonstration sites under PEBACC. For an overview of the project deliverables, see : Project Publications and Reports | Pacific Environment (sprep.org).

As part of the Kiwa Initiative regional component, this second phase of the project (PEBACC+ for Ecosystem-based climate change adaptation in the Pacific Islands) will strengthen existing activities, diversify them, and integrate ecosystem-based adaptation into public policies to ensure its sustainability. Two new territories, New Caledonia and Wallis and Futuna, will also be able to benefit from the PEBACC approach and activities to be implemented on the ground.

PEBACC+ is organised around three components:

About the Kiwa Initiative

Officially started in March, 2020, the “Kiwa Initiative – Nature-based Solutions for climate resilience” (www.kiwainitiative.org) is the first programme ever to gather five donors (France, the European Union, Canada, Australia and New Zealand) and regional/national partners around a common objective : to enhance access to funding for rights-based gender-sensitive and socially-inclusive climate change adaptation through nature-based solutions for Pacific Island Countries and Territories (PICTs), including local, national and regional authorities as well as civil society organisations. Taking action to protect biodiversity (conservation/restoration) and developing Nature-Based Solutions (NBS) to anticipate, reduce vulnerabilities and strengthen adaptive capacities of Pacific Island Countries and Territories in the face climate change are the core governing principles of the Initiative.

The Pacific Ecosystem-based Adaptation to Climate Change (PEBACC) project was a five year project that explored and promoted Ecosystem-based Adaptation (EbA) options for climate change adaptation. The Project was implemented by the Secretariat of the Pacific Regional Environment Programme (SPREP) in partnership with the Governments of Fiji, Solomon Islands and Vanuatu.

The overall intended outcome of the project were to: EbA is integrated into development, climate change adaptation and natural resource management policy and planning processes in three Pacific island countries providing replicable models for other countries in the region.

The PEBACC Project was funded by the International Climate Initiative (IKI). The German Federal Ministry for the Environment, Nature Conservation, Building and Nuclear Safety (BMUB) supports this initiative on the basis of a decision adopted by the German Bundestag.

Ecosystem-based Adaptation (EbA) is a holistic approach to adaptation planning that seeks to harness the potential of healthy ecosystems and biodiversity to strengthen social and ecological resilience.

EbA is a nature-based solution and is increasingly seen as a pragmatic and sustainable option for securing resilience in social and ecological systems impacted by climate change. 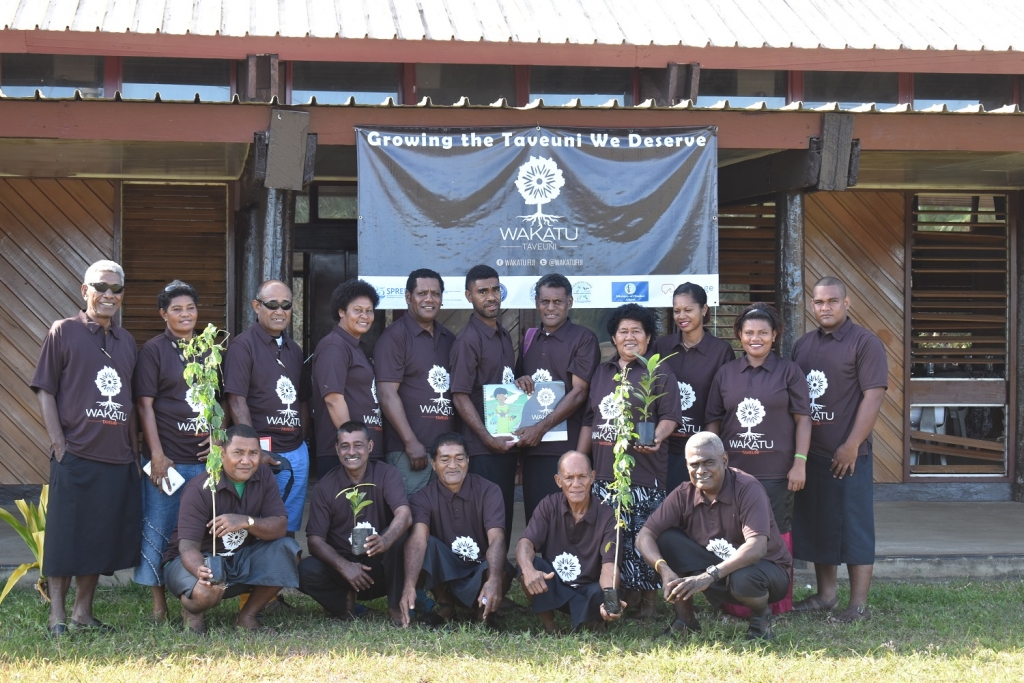 Supporting Taveuni communities to protect their environment by encouraging activities such as tree planting, August 2018.