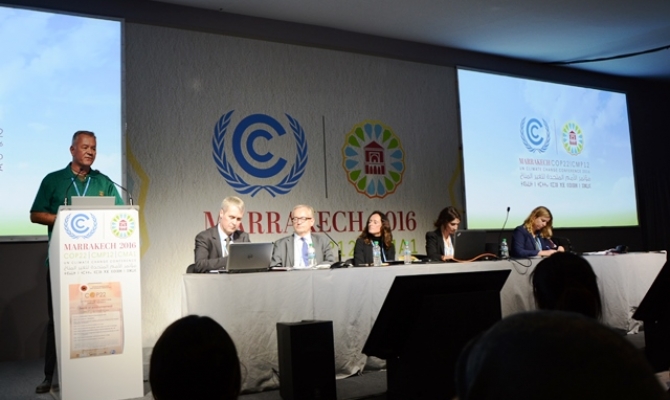 Climate Change Resilience
9 November 2016, UNFCCC COP22, Marrakech, Morocco - Appropriate measures to minimise the negative impacts that the likelihood of climate change induced migration will have on Pacific islanders needs to be fully understood.

Globally, forced displacement related to disasters as well as the adverse effects of climate is a reality and among the biggest humanitarian challenges facing the international community in the 21st century.

According to the Platform for Disaster Displacement, formerly the Nansen Initiative, between 2008 and 2014 a total of 184.4 million people were displaced by sudden-onset disasters, an average of 26.4 million people newly displaced each year.

Of these, an annual average of 22.5 million people was displaced by weather and climate-related sudden-onset extreme hazards. Others have had to move because of the effects of sea level rise, desertification or environmental degradation.

Speaking at a side event organised by the Platform for Disaster Displacement (PDD), Climate Change Adviser for the Secretariat of the Pacific Regional Environment Programme (SPREP), Mr Espen Ronneberg shared some Pacific region's perspectives on climate change induced migration.

"To understand some of the key challenges and issues that overlay the migration and displacement issues in the region, one needs to consider the small land area of the islands and their huge EEZ."

"There is also a profound and deep connection of people to their land and oceans and all that it contains – it is the foundation of their culture, history, social and environmental interactions and existence."

"The Pacific is also challenged by low incomes, lack of capacity, distance and vulnerable resource base", Mr Ronneberg said. 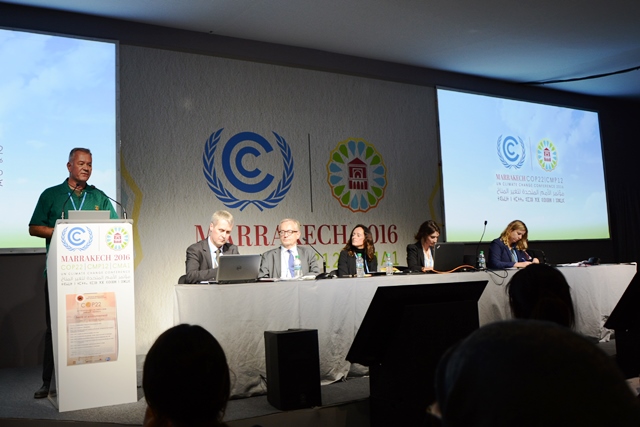 SPREP's Climate Change Adviser, Mr Espen Ronneberg, presenting at the side event organised by the Platform for Disaster Displacement at the UNFCCC COP22 in Marrakech, Morocco.
Photo: SPREP

However, while the issue of displacement may be a hard pill to swallow, Pacific island governments will need to be informed and discussed now, they will also need to develop strategies to address the impacts of displacement due to extreme weather events, on its populace.

"We have some experience with planned relocation as adaptation in the region, but these have been largely within the same country such as relocation from low lying islands or coastal villages to different islands, or areas that may be higher," said Mr Ronneberg.

"We need to understand the resources and infrastructure that will need to be made available so as to ease relocation and at least seek to minimise harm to populations and communities. However, relocation from a Pacific island to another or to outside the region has a lot more issues to consider such as legality, land ownership, their EEZ and resources therein, access to resources, means of livelihoods, cultural aspects and many others".

While the Pacific island countries have made minimal contributions to the causes of climate change, they are among the first to be impacted.

The side event was part of a range of knowledge sharing events and platforms at the twenty-second session of the Conference of the Parties to the United Nations Framework Convention on Climate Change (UNFCCC COP22).

A total of 13 Pacific Island country delegations are attending COP22 in Marrakech, Morocco from 7 to 18 November, 2016. In all, 14 Pacific islands are Parties to the UNFCCC. By Jone Tuiipelehaki Raqauqau reporting from UNFCCC COP 22 #4PacIslands

For more information on the Platform for Disaster Displacement (PDD) please visit: www.disasterdisplacement.org