DG Latu's Statement at the Opening of the SPREP Office in Fiji - 26th July, 2016 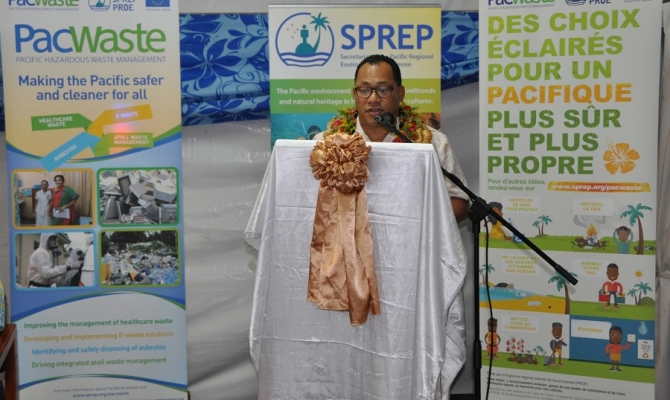 Bula and good evening and welcome to you all - to this function to mark the official opening of the SPREP office here in Fiji.  May I, first of all thank you the Hon Minister for making time to attend tonight's event but also for your opening remarks which are much appreciated. 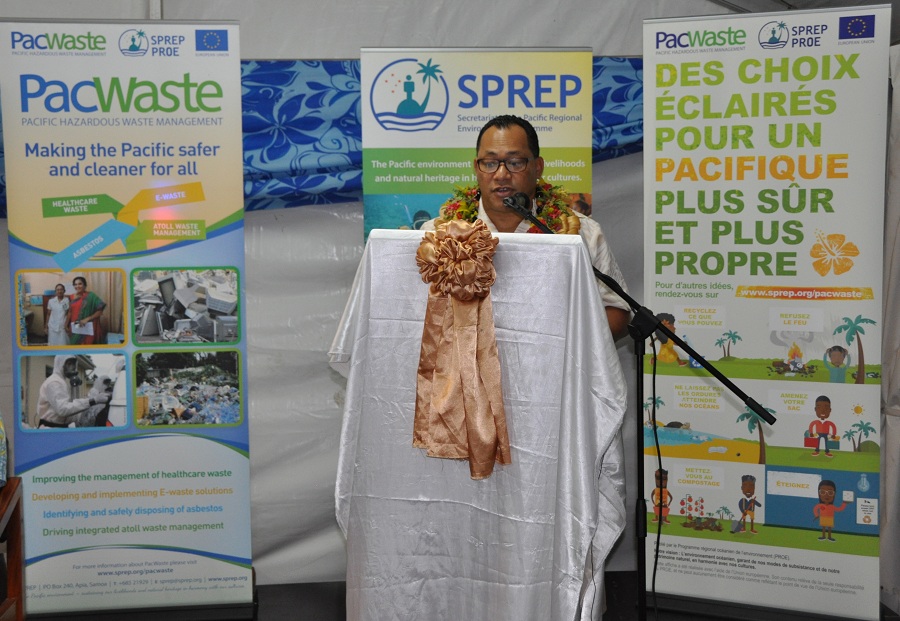 DG of SPREP, Mr Kosi Latu delivering his speech at the opening of the SPREP office in Suva

Fiji has been a valued SPREP member since its formation as an independent regional organisation and we are very pleased to be establishing an office here in Suva. Indeed many of you, in your responses to the invitation for tonight's function, mentioned that this development was long overdue.  We agree that it makes sense for SPREP to also have a presence in our member countries.  This is in line with requests by Pacific island members for SPREP to become more accessible and visible in other parts of the region.  Acting on this request, SPREP has out-posted Secretariat officers and project staff in Palau, RMI, Solomon Islands, Vanuatu and now – Fiji.

Suva is of course, a logical choice, given that it is the regional hub for the diplomatic and development community and enables SPREP to further enhance its engagement with all Suva based partners, donors and stakeholders.

Fiji was one of the original parties of the SPREP Agreement which established SPREP in 1993 as an independent inter-governmental regional organisation. However, SPREP began life in the late 1970s as a joint initiative of SPC, SPEC, ESCAP and UNEP - eventually functioning as a component of UNEP's Regional Seas Programme. The Programme received further impetus as a result of the 1982 Conference on the Human Environment in the South Pacific.  In those days SPREP was based with SPC in Noumea.  But following a period of expansion and long deliberations by Pacific island Leaders, SPREP finally moved from SPC in 1992 and relocated to Samoa.  Apart from its own programme, SPREP is the secretariat for two regional conventions – the Waigani Convention and the Noumea Convention and its Protocols (the 'SPREP' Convention).

SPREP's vision is.... the Pacific environment - sustaining our livelihoods and natural heritage in harmony with our cultures.

We are the region's intergovernmental  environmental organisation, addressing the region's environmental strategic priorities of:  Biodiversity and Ecosystem Management, Waste Management and Pollution Control, Climate Change and Environmental Monitoring and Governance. These key priorities are reflected in our Strategic Plan developed and adopted by our members, and we host an annual SPREP meeting of members whereby our performance is reported and monitored. This years' SPREP meeting which will include a ministerial component will take place in September in Niue.

Last week, SPREP completed a regional consultation in the development of a draft new strategic plan which will be submitted this year to the SPREP annual meeting for adoption. At this consultation, SPREP members reinforced the role and mandate of SPREP as the lead coordinating agency of the region on the environment, and also as the lead regional coordinating agency on climate change in its areas of competence and technical expertise.

As the Minister has alluded to, a key regional concern of course for all of us is climate change. He mentioned that climate change poses an existential threat to our well-being and Pacific way of life.  Pacific leaders at their meetings have consistently said in the past 7-8 years that climate change is potentially the most serious issue to the survival and sustainable development of Pacific island countries.  At SPREP we fully understand the severity of the challenge and are actively engaged in this area of work on a number fronts.  It is also for this reason that 7 years ago participants at the Pacific Round Table Meeting for Climate Change recommended the need for a regional climate change centre that would coordinate all climate change activities in the region and avoid duplication of efforts.  At PALM 7 in Japan last year Pacific Leaders endorsed the Pacific Climate Change Centre to be based at SPREP.

I am pleased to announce that progress on the Pacific climate change centre is now moving at a steady pace.  All preparatory work including the building design, location, and equipment have been finalized and agreed upon.  This Friday, the Vice Minister for Foreign Affairs for the Government of Japan will sign a Note of Exchange with the Government of Samoa to formalize the next steps which include the actual beginning of construction around June of next year.  The Pacific Climate Change Centre will be a climate hub of excellence which will be a conduit and catalyst for coordinating climate change activities in the region.

May I also acknowledge the support of the government of Japan in funding the building of the centre.  The centre will be a shared regional resource that will facilitate and apply state-of-the-art research, training and extension work on various topics of relevance to climate change. Through this centre we hope that the science driving our understanding of climate change in the region will be strengthened, so that organisations active in this field will be able to deliver more targeted and science-based support to countries.

I would also like to acknowledge the German government for its support in funding the Pacific Ecosystem-based Adaptation to Climate Change Project or PEBACC - another climate change initiative being implemented by SPREP. PEBACC is part of our ecosystem-based adaptation to climate change programme. Well-managed and functioning ecosystems and the services that they provide are essential for maintaining and building national and community resilience to climate change, and this is reflected in most Pacific national climate change policies. The PEBACC project will build awareness of EbA by designing and implementing a range of practical activities and programmes to build the capacity of national agencies and communities to sustain the ecological and social  bases of resilience that are essential for sustainable development and climate change adaptation.

The project runs for 5 years and participating countries are Fiji, Vanuatu and Solomon Islands. Project sites include: Taveuni, Macuata Province in Fiji; Port Vila and Tanna in Vanuatu and Honiara and Choiseul Province in Solomon Islands. We are excited that two urban areas have been included in the project, as it is often these high-density areas - where there is a significant alteration of ecosystems – that are often overlooked. The office that we are opening today is the central office for the 3-country PEBACC project. However, it will be a resource for all SPREP projects and a much needed base for staff when working in Fiji.  Whilst we are starting with a small team of 4 staff members, we anticipate the Fiji office to expand along with its work, and likewise SPREPs presence in Fiji.

Finally, Hon Minister may I through you convey our gratitude and a big vinaka levu to the Fiji government for entering into a host country agreement with us, enabling SPREP to establish this office. We look forward to strengthening our relationship even further in the years ahead.