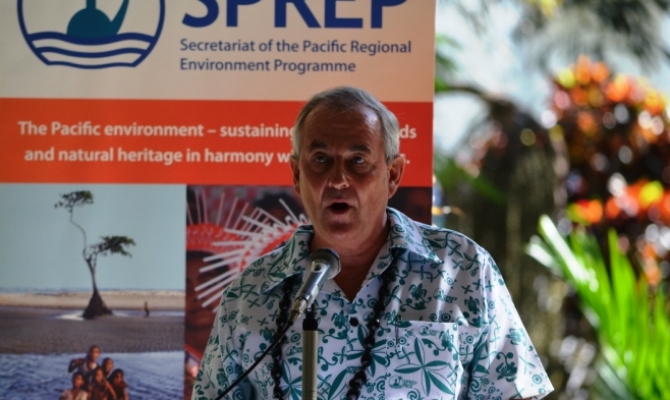 Thank you all for honouring us with your presence this evening.

Thank you Honourable Acting President and through you, if I may, thank you to the Government and people of the Republic of the Marshall Islands for your warm and generous hosting of this years' SPREP Meeting. 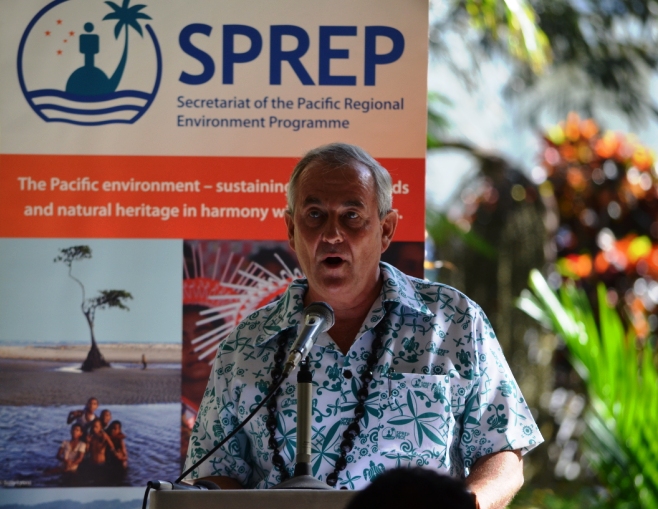 On behalf of SPREP I would like to extend a warm welcome to you all to tonights' Official Opening Ceremony for the 25th SPREP Meeting.

I hope your journey here was a safe one, and that the week ahead will be a productive and enjoyable one for you all.

I am well aware this is a busy time for all of us working in the environmental field and that you are all busy people.

So - thank you for making the time to attend this very important meeting.

For SPREP the last year has been particularly busy – in fact we have been flat out.

Our work has included two major reviews, including the Second Independent Corporate Review, the landmark SIDS conference in Samoa, preparations for this SPREP meeting, as well as delivery of relevant and focused programmes in our Pacific island countries and territories.

Our work has - at all times - been guided by the principle of supporting Pacific island members of SPREP to better manage and protect their environment to ensure sustainable development.

It is pleasing to note that 24 out of the 26 Members of SPREP are attending this years' SPREP Meeting.

In total we anticipate this SPREP Meeting will welcome around 150 participants, including over 20 partner organisations. For SPREP this represents a record - congratulations to you all on being part of such a record breaking event.

This year marked SPREP's 21 years since the SPREP Agreement came into force in 1992.

SPREP has grown significantly since then.

We reached a significant milestone this year with the first ever SPREP staff appointed outside of SPREP Headquarters. We now have SPREP staff working with our member agencies in the Marshall Islands, Federated States of Micronesia and the Solomon Islands.

In fact, the first non-HQ based staff member appointed in our history was Moriana Phillip – here in the Republic of the Marshall Islands.

At SPREP each of the out-posted officers like Moriana have a Focal Point within SPREP headquarters to support their work – Moriana's Focal Point is Azarel Mariner. They have worked together very closely – so close in fact that they both recently gave birth within 2 weeks of each other.

Congratulations Moriana and Azarel on the latest additions to the SPREP family !

Congratulations also to the Government of the Marshall Islands - and to Moriana - for pioneering the way for SPREP as we continue to grow and better serve our members in the Pacific region.

SPREP has grown since 1992 but so have the environmental challenges facing our region.

The UN Secretary General in his keynote address to the SIDS Conference in Samoa 2 weeks ago underlined the extreme vulnerability of Small Island Developing States to climate change and environmental disturbance.

Pacific leaders at their meeting here in Majuro last year highlighted climate change as the greatest threat to the peoples of the Pacific and issued the stirring Call for Action through the Statement - "Marshalling the Pacific Response to Climate Change".

The Pacific region has some of the most low-lying countries on Earth – Kiribati, Tuvalu and the Marshall Islands, as well as the territory of Tokelau.

Although our Pacific countries only contribute 0.03% of the world's greenhouse gas emissions they will be the first to go under if the business as usual scenarios of the IPCC come to pass.

These issues are real and are a matter of human security. They were bought dramatically into focus by the Marshallese Poet - Kathy Dede Neien Jetnil-Kijiner - at the UN Secretary General's Special Climate Change Summit in New York last week

I understand her speech bought down the house and was rightly recognized with a standing ovation.

Her speech underlined the urgency of the challenges facing Pacific Island countries – and the urgent need for concerted international action, including at the 2015 Paris Climate Change Convention Meeting – the outcomes of which will be vital for our region

We must all work collectively, with a sense of urgency and purpose, to address these challenges and support all island countries to become more resilient.

The Pacific Islands Forum Leaders Meeting held in Palau this year underlined the critical importance of the conservation and sustainable management of the Pacific Ocean - as well as the many threats faced.

SPREP would like to congratulate the Marshall Islands on this significant achievement.

This underlined to me the many positive actions that Pacific countries and territories are taking to protect their marine and terrestrial environments - and to adapt to climate change.

In the words of the Honorable President Loeak of the Republic of the Marshall Islands: "In the Pacific we are doing more than waving our hands in distress............these actions send a clear message to the rest of the world that if we can do it, you can too, if we can reduce our emissions by 30% than so can you".

This spirit of developing "Pacific solutions to Pacific problems" runs through many of the programmes at SPREP and our activities in Pacific countries and territories.

For example, the The Pacific Adaptation to Climate Change (PACC) Project is delivering practical, tailored, on ground, climate adaptation solutions in Pacific countries, in key sectors such as water, agriculture and coastal infrastructure.

The development of the runway at the Majuro airport as a water catchment, linked with awareness programmes on water conservation, has been supported by the PACC Project and underlines the innovative ways in which Pacific countries and territories are adapting to climate change.

SPREP supports Pacific countries to protect and better manage and protect natural ecosystems and address major challenges such as invasive species - as this is vital to protect our precious island biodiversity and also as a key front line response to a changing climate and rising sea levels.

We respectfully invite all countries and all delegates to work with SPREP on our campaign theme for the next 2 years – "Natural Solutions: Building Resilience for a Changing Pacific"

Today's 4th Pacific Environment Forum noted the critical importance of better waste management of waste and pollution and also highlighted many innovative approaches such as the JPRISM and PacWaste projects and the use of the 3Rs and Return approach.

We have a busy week ahead of us with many matters of pressing importance for our region.

We look forward to benefitting from your collective wisdom and guidance as we move forward.

In closing, I would like to acknowledge the hard work of SPREP staff, over the last year.

Many of you have had the opportunity to work directly with our staff members. We look forward to strengthening the bonds of this relationship – both professional and personal - over the coming week and beyond.

I thank and applaud the efforts of SPREP Members to ensure a better Pacific environment is passed on to our children and to future generations.

Honourable Acting President, Honourable Mayor I would like to thank you, the Government and the people of the Marshall Islands most sincerely for your warm and generous hosting of this 25th SPREP Meeting.

I look forward to a positive, busy and enjoyable week together.