The Pacific launch of the Fifth Assessment Report of the Intergovernmental Panel on Climate Change (IPCC AR5) took place in Apia today at the National University of Samoa.

It was an opportunity to learn more about the results found within the IPCC reports and how they will impact upon the Pacific islands and the world.

"Pacific countries have consistently called on developed countries to do more to reduce their greenhouse emissions. Although we only contribute 0.03% of the world's greenhouse gas our countries are in the front line and will be the first to disappear with rising sea levels," said Mr. David Sheppard, Director-General of the Secretariat of the Pacific Regional Environment Programme (SPREP) at the opening of the one day event today. 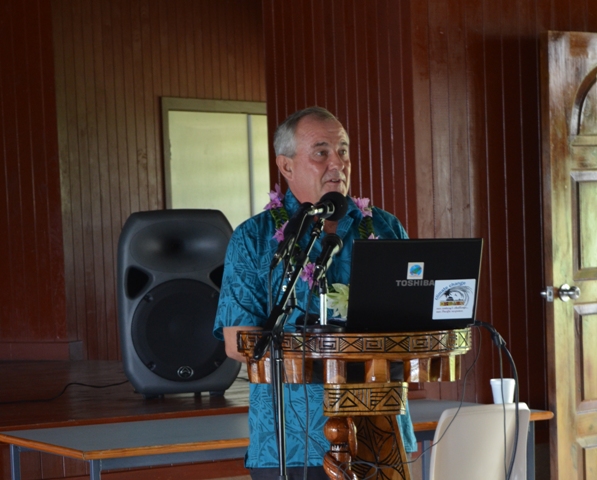 "IPCC reports are essential in this regard as they form the scientific backbone to policy advice that is developed for the international negotiations process. The IPCC reports underline that we must move away from the business as usual scenarios and take concrete actions, first of all by those with the largest emissions and the higher capacity to take action."

Today's one day event coordinated by SPREP and the National University of Samoa not only learnt more about the key findings within these reports but also presented two panels to discuss how climate change has impacted upon the Pacific island region.

"INS quote from recorder of the NUS VC"

The Intergovernmental Panel on Climate Change (IPCC) is the international body for assessing the science related to climate change. The IPCC was set up in 1988 by the World Meteorological Organization (WMO) and United Nations Environment Programme (UNEP) to provide policymakers with regular assessments of the scientific basis of climate change, its impacts and future risks, and options for adaptation and mitigation.

In 2007 the IPCC was awarded the Nobel Peace Prize for its work on climate change together with former United States Vice-President Al Gore.

The Intergovernmental Panel on Climate Change (IPCC) assesses all relevant peer reviewed scientific information relating to climate change in between reports, for example from 2007 up to 2013 scientific information was reviewed before the release of the WGI report. Some non-peer reviewed sources, such as government and industry reports, could also be considered after assessment by an IPCC committee.

Authors are selected from lists supplied by governments and organisations, based on their expertise and experience. All IPCC experts who contribute to the preparation of these reports do so, on a voluntary basis with no financial remuneration.

Today was the opportunity to hear directly from the contributors to the IPCC reports as they provided overviews to the reports. IPCC presenters at the event were; Dr Christopher Field Director of the Carnegie Institution's Department of Global Ecology; Mr Solomone Fifita, Head of the Secretariat of the Pacific Community (SPC) Economic Development Division's Energy Programme; Dr Kathleen McInnes, from Australia, is a researcher at Commonwealth Scientific and Industrial Research Organisation Marine and Atmospheric research in Australia; Dr Netatua Pelesikoti is the Director of Climate Change at SPREP; Professor Ralph Sims Massey of Professor of Sustainable Energy, and Director, Centre for Energy Research and; Dr David Wratt is Chief Scientist, Climate, at New Zealand's National Institute of Water & Atmospheric Research, and the Director of the New Zealand Climate Change Centre.