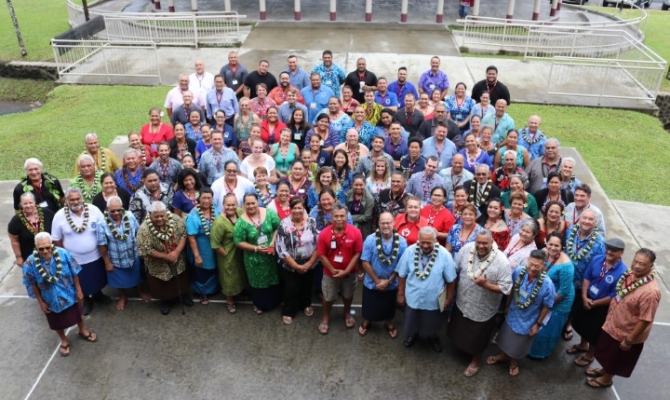 24 September 2019, American Samoa - The voice of 16 year old Swedish climate activist Greta Thunberg has made ripples in American Samoa at the opening of the Pacific Risk Management `Ohana (PRiMO) Meeting today - ‘Ohana being the Hawaiian word for family.

The theme of the PRiMO 2019 is ‘Weaving a path to “precovery in American Samoa, Fafauina o se alafua e toe fausia ai Amerika Samoa”, this guiding principal is at the core of the two day discussion helping to address risk management and how American Samoa can better respond to disasters, building upon experiences and lessons learned from previous disasters.

Words from Ms. Thunberg’s speech at the UN Climate Summit now underway at the UN Headquarters in New York were quotes during the opening of PRiMO, helping to set the scene for PRiMO discussions ahead.  Ms. Thunberg questioned global leaders and their lack of action as the world is starting global mass extinction.

“Powerful words were said from a 16 year old, looking ahead at the years to come and the generations to come and they are telling us that the future is theirs but we need to do something right now,” said the Lieutenant Governor, Hon Lemanu Palepoi S. Mauga of American Samoa after he outlined the impacts of climate change based upon science.

The world is becoming is increasingly effected by a changing climate such as food security, diseases, droughts, and sea level rise which is a strong threat to the Pacific region given four of the six lowest lying nations in the world are in the Pacific.

“We all want to be able to ‘build back better’ so that our communities become stronger.  A resilient community is likely to be wealthier and healthier.  We see firsthand, alongside the Pacific leaders of our region, the impacts and implications of the climate change crises facing our American Samoa and we acknowledge the ambitious action on climate change that that region has been calling for.”

Meeting every year, this year is the third PRiMO meeting hosted in American Samoa for which the meeting will seek feedback and input on pre-disaster recovery and long-term disaster recovery planning.

The two day event will remember the 10th Anniversary of the 2009 tsunami in American Samoa with a special session that shares the stories and lessons learnt of resilience building following the disaster which claimed 34 lives in American Samoa alone.

Over these two days the sharing of stories was encouraged by Mr Adam Stein, the Executive Director of PRiMO as he shared his personal experience of the 1989 Hurricane Hugo which struck Charleston, an extreme weather event that has been labelled by some as the first modern destructive hurricane.

“My suffering and your suffering is part of a shared experience.  Anxiety during hurricane season are feelings we all experience, and we can share our stories and transform our suffering into moments of connection that can lead to great things,” presented Mr Stein during the opening ceremony of the 2019 PRiMO meeting.

“We can share our stories and transform our suffering into moments of connection that can lead to great things.”

The PRiMO opens after a day of pre-meeting training sessions for which the Secretariat of the Pacific Regional Environment Programme (SPREP) facilitated the media Mana Class on PRiMO and Climate Resilience in partnership with PRiMO. - #ASPRiMO19