Home away from home – a story of resilience on Wagina, Solomon Islands. 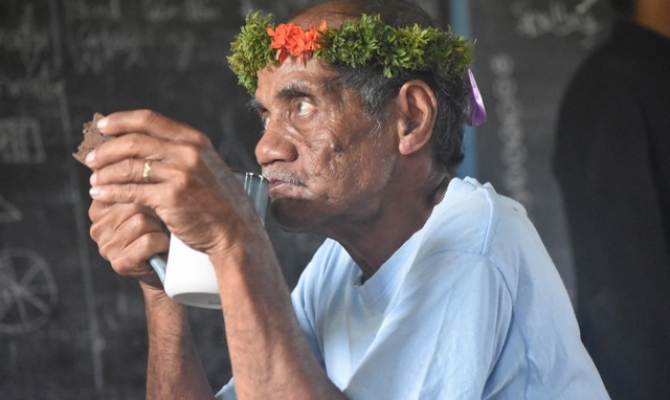 In 1964, young Joseph Teia said goodbye to his home in the Gilbertese islands of Kiribati, boarded a vessel and came to Solomon Islands and never returned. He was seven years old when he left.

As a young child, he did not understand why he had to leave his home and his father behind to come to another place.

His dad died when he was just a small boy and he does not remember him at all but holds him close to his heart.

The only memory Joseph has of the life he left behind is the long trip he took to the Solomon Islands, known back then as the British Solomon Islands Protectorate (BSIP).

“I remember there were four huge houses on this island when we came. Those that came from Kiribati stayed in those houses. The island was full of trees and there was actually no home for us. We had to clear the area ourselves and then we started building our homes,” Teia muses.

Wagina was then just a dense forested island with swamps and rocky stones along its coast.

Plunged into a world so different from the one they had left behind, the I-Kiribati were faced with the challenge of adapting to their new environment.

“People from Guadalcanal, Malaita and I think Isabel too, came to help us build our houses. We did not know how to build houses from coconut or sago palm leaves as we were only used to pandanas leaves. So they came and helped us,” Teia says.

Joseph Teia has lived on the island of Wagina for 55 years (with a small portion of time spent on Gizo in the Western province).

He has four children, three of whom are still in school. All of his children now live in Honiara and he supports their education with money he earns from selling seaweed, sea cucumber and other marine resources.

“My wife died and so I am living by myself. But I have my nephews and nieces here who also assist me in fetching water and washing clothes for me to wear.”

Over time the population on Wagina has grown. The increasing number of people has meant increasing threats to their livelihood. Access to safe water is one of those threats.

The river on which they relied for fresh water when they arrived on Wagina is no longer clean and is contaminated with plastic and other debris.

Streams that were once crystal clear and cool have now turned murky and dirty with the increase in population and clearing of land.

“The only source of clean water we have is from the [rainwater] tanks. But in the past, we used to collect drinking water also from the other sources,” Teia says.

In 2018, the SPREP-PEBACC project carried out an extensive ecosystem and socio-economic resilience analysis and mapping (ESRAM) study for Wagina.

This formed the basis of an ecosystem-based adaptation options assessment, which highlighted the need for a Water Resource management guideline to help the community focus on managing and maintaining the quality of water.

This came to fruition with the launch of the guideline on the weekend of 19th October 2019. The guideline serves to help the people of Wagina protect the limited water sources they have.

Asked if bauxite mining on the island is welcoming news, Teia strongly objected to the notion .

On the whole, another threat looms for the people of low-lying atolls like Wagina.

The daunting thought of relocation is something the people of Wagina would not want to go through again. The faraway islands of Kiribati are only but a dream for the old people of Wagina.

For the younger ones, the islands of their forefathers are no longer one they envisage ever calling home again.

“This is our home now. Should anything happen to us, we do not know what we will do nor where we will go”.

The island of Wagina is a project site for the Pacific Ecosystem-Based Adaptation to Climate Change project (PEBACC), a five-year initiative funded by the German Government and implemented by the Secretariat of the Pacific Regional Environment Programme (SPREP). The intention of the project (2014 – 2019) is to promote ecosystem-based adaptation (EbA) through the generation of new knowledge on local ecosystem services and its integration into development, climate change adaptation and natural resource management policy and planning processes in three Pacific island countries – Vanuatu, Fiji and the Solomon Islands.