Working to keep the Pacific safe from hazardous waste 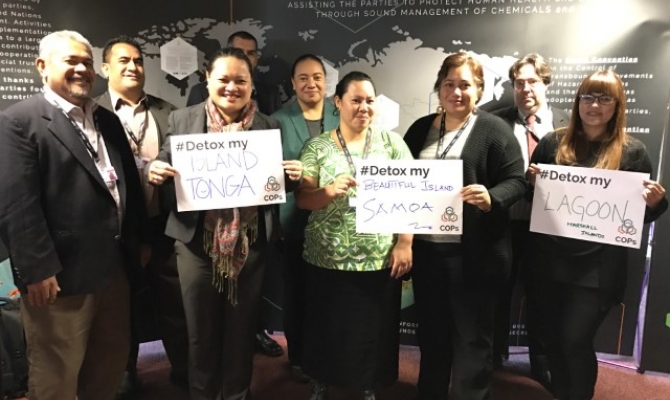 Image:  Pacific island delegates at the Triple BRS COP in 2017

Nadi, Fiji, 22 February 2019 - An amplified, united Pacific voice at the global level to protect the Pacific island region from the importation of hazardous chemicals, persistent organic pollutants and the movement of hazardous waste - is on the agenda for the Pacific region.

From 29 April to 10 May this year, Pacific island Parties will be counted with over 185 Parties at the Conferences of the Parties to the Triple BRS Conventions to deliberate on hazardous waste issues.  The Triple BRS Conventions are the Basel Convention on the Control of Transboundary Movements of Hazardous Wastes and their Disposal, the Rotterdam Convention to promote shared responsibilities in relation to importation of hazardous chemicals and the Stockholm Convention on Persistent Organic Pollutants.

Over eight million litres of used oil which can impact human health and our biodiversity is generated each year in the Pacific.  Of this, less than half is collected, packaged and exported or reused domestically to supplement fuel sources for boilers, furnaces and diesel generators.

“The Secretariat of the Pacific Regional Environment Programme (SPREP) and its Members have long held the vision that the Pacific region should be one where human health and the environment are not threatened by hazardous and toxic waste and chemicals,” said Dr Vicki Hall, Director of the Waste Management and Pollution Control of SPREP as she addressed the very first Triple BRS COP preparatory meeting to be held.

“This is the reason why we work so hard as individual parties and collectively as a region to put in place programs and implementation mechanisms to make sure that our very vulnerable islands are not harmed and destroyed by these materials.”

This week in Nadi, Fiji the preparatory meeting of Pacific Parties to the 2019 Triple BRS COP will determine and plan the way ahead for key ‘asks’ from the region this year.

“The management of chemicals and hazardous waste at the islands level is still a long way off from being ideal.  The mechanisms and systems that are in place have got lots of gaps in them; the infrastructure and human capacity to administer these systems are very limited; there is inadequate and inappropriate legislation in place to properly control these material,” said Dr Hall.

“Despite these shortfalls, countries continue to make l progress in some areas of their work by committing themselves to be part of the global family to address these materials.  There is interest and commitment in the region to make sure that this category of wastes and materials is managed properly by becoming parties to these conventions.”

The one day preparatory meeting to the Triple BRS COP is being held in Nadi, Fiji on 22 February 2019 for which participating countries include Australia, Fiji, Cook Islands, Kiribati, Republic of the Marshall Islands, Niue, Papua New Guinea, Samoa, Tonga, Vanuatu, Tuvalu and Solomon Islands.

Pacific island parties to the Rotterdam Convention are Cook Islands, Republic of the Marshall Islands, Samoa, Tonga and Vanuatu.