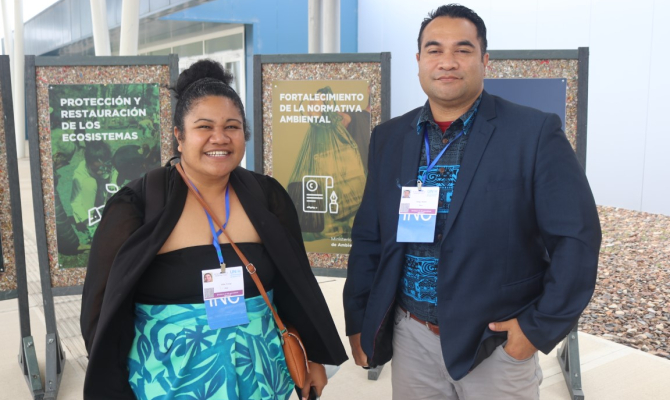 02 December 2022, Punta del Este - Niue has called on the international community for capacity building, knowledge and technology transfer, and financial support that prioritises Small Island Developing States (SIDS). This will facilitate the successful implementation of the internationally legally binding instrument to end plastic pollution, with the foundation being developed this week.

Niue is among Pacific countries amplifying our Pacific’s voice in Punta del Este, Uruguay, as negotiators begin the discussion of measures and obligations related to the development of the legally binding treaty, expected to be finalised by the end of 2024.

On Wednesday at the Punta del Este International Congress Centre, Ms Luina Vilila, of Niue, delivered the Pacific Small Island Developing States (PSIDS) statement on Agenda Item 4.3(b), which deals with the Means of implementation, including capacity building, technical assistance, and finance. She highlighted the Pacific region’s struggles to access appropriate technology, funding mechanisms and the lack of capacity to adequately implement necessary actions to combat the scourge of plastic pollution.

“The instrument must provide this support, whilst pushing to limit the creation of plastic upstream to reduce burden on Pacific SIDS who are most impacted by plastic pollution, and also most reliant on the Ocean, yet the least able to act to address these impacts,” Ms Vilila said.

Niue also reaffirmed the Pacific’s support for calls to establish a scientific, economic, and technical body to advise the implementation of the instrument, including the facilitatation of the provision of means of implementation.

“It will also support evidence-based decisions, understanding impacts of chemical additives and toxicants, and the potential for these materials to impact the practicality of a sustainable circular economy for plastics. Our Pacific people are at risk from both the use, and the impacts of the significant plastic waste that end up in the Ocean, which is one of the primary food sources for the region,” Ms Vilila said.

According to the Niue delegate, a suite of financial support mechanisms, including stable sustainable funding and grants, are critical to ensure the implementation of immediate actions to tackle plastic already existing in the environment, while the necessary actions are undertaken to ‘turn off the tap.’

Like all Pacific delegates who have been championing the Pacific’s cause at the negotiations, Ms Vilila reiterated that Niue and Pacific SIDS depend on the ocean for food, transport, traditional practices, and economic opportunity.

“The increasing production and consumption of plastics is an issue that needs to be controlled to reduce plastic wastes in the Pacific Region. Plastic pollution adversely affects the health and well-being of the people and the biodiversity of marine and terrestrial ecosystems of the Pacific Region,” she said. “The future instrument must recognise that Pacific SIDS are the receivers of plastic either as imported materials, or through the transboundary movement of waste through the Ocean.

“Pacific SIDS share the views of AOSIS, that discussions on the instrument’s financial mechanism and corresponding obligations should begin at the outset to establish roles and responsibilities with respect to each area of focus within the instrument.”