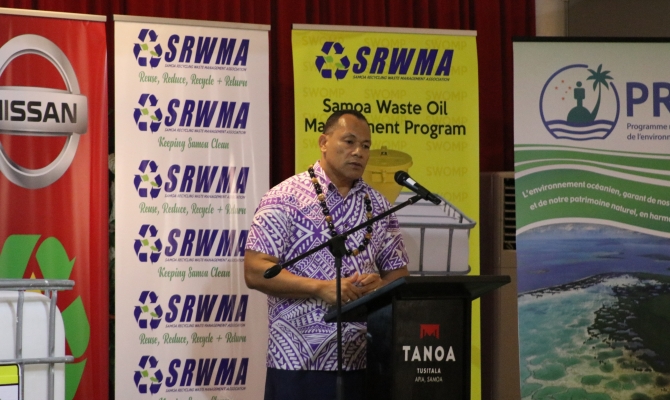 The Honorable Chair to the Fifteenth Noumea Convention COP,

I would like to thank the Chair for his opening remarks, and also thank all of the parties who have turned up in such promising numbers to this, the fifteenth conference of the Parties to the Noumea Convention conference of the Parties. We have a total of 9 to 10 of the Parties making it another great turnout. I think it again reflects the value we get from the convention in ensuring that - with often only shoestring budgets - activities of the Parties and the Secretariat together can be targeted and directed to tackle and resolve large environment management and pollution control challenges.

We all know about the increasing attention on our SPREP Region. But as an area larger than that of Russia, and as large as the surface of the Moon, we have very significant management challenges due to the immense marine ecosystem spread over 30,000 remote islands and communities that our the region supports.  The challenge is further complicated when you couple the pressures or growth and development with so many varied manifestations of climate change.

It is therefore a critically important management challenge when you consider how we maintain the traditions, cultures and economies of Pacific Island Peoples that are reliant upon these vast yet vulnerable resources.

These challenges are recognized both regionally and globally through key documents such as:

The Noumea Convention provides a legally binding document for Parties to undertake action for the environment in the Pacific islands region.  The Noumea Convention was established in 1986 and entered into force in 1990.   The Convention was established on the basis of a quite different set of regional issues to what we experience today.  For example, the Convention don’t speak at all about climate change or plastic pollution specifically – undoubtedly two of the greatest challenges for us in this period.

Under the Convention, we have been able to address many of the emerging and challenging issues in this space, such as:

The increasing demands and emerging pressures upon our regional natural resources - not just from within the region, but from multiple global scale drivers – call for even more effective resourcing and technical assistance, and co-operation, in order to better plan and manage for sustainable use of our Pacific Ocean and island resources.

The Convention Parties at this COP will deliberate on the review of the Conventions to evaluate its effectiveness to serve the region in addressing current as well as emerging issues. To look at whether the current scope of the Convention is adequate in providing the legal foundation for the broader issues of today and beyond. I hope the review is a catalyst for on-going future discussions as well.

Much more is needed on a range of issues, given the rapid increases in the scale of pressures and threats.  For example, the Pacific oil spill response capabilities and contingency plan will be considered for endorsement at this COP. It is important to recognise the important role of international instruments play such as the Noumea Protocols and the International Maritime Organization (IMO) conventions, particularly the compensation and liability conventions in dealing with the pressures of oil spill incidents.

In managing all of these, we must also remember that we are dealing with closely interconnected ecological systems of oceans and islands to support diverse activities, economies, livelihoods and social wellbeing of people - both within the region and beyond.  Over the next two days we will review a number of ongoing items and make decisions on at least 4 specific items under the Convention to take us forward in ocean environment management until the next Noumea Convention CoP in 2021.

In the next two days, as we review our work of the Convention to date, and plan our future efforts, I urge all of us to keep these key issues and objectives in mind.