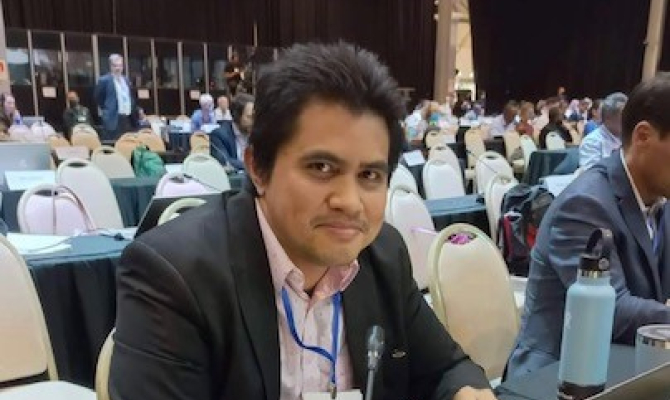 01 December 2022, Punta del Este - Pacific Small Island Developing States (PSIDS) have called for a ‘level playing field’ so that a proposed legally binding instrument to end plastic pollution, including in the marine environment, can be effectively implemented at the national level.

The point was made in a statement the Federated States of Micronesia (FSM) delivered on behalf of the PSIDS concerning Agenda Item 4.3(a), which deals with elements for core obligations, control measures and voluntary approaches.

Mr Clement Yow Mulalap, Legal Adviser of FSM’s Permanent Mission to the United Nations, spoke on Wednesday as the work to develop an international legally binding instrument to end plastic pollution, including in the marine environment, continues in Punta del Este Uruguay.

Pacific delegates are amplifying our Pacific voice at the meeting where more than 2,000 delegates from governments, the private sector and civil society are meeting.

In terms of core obligations, the PSIDS want the instrument to provide for the prevention, reduction and elimination of plastic pollution, including in the marine environment, and with consideration for the remediation of legacy plastic pollution.

“Provisions toward this end could include, for instance, a ban or bans on single use plastics (where practical), as well as bans on problematic or hazardous polymers and other constituent chemicals,” the statement reads.

“The core obligations should also provide adequate, predictable, new, additional, and sustainable means of implementation, including capacity building, technology transfer and development, and financial support, in particular to SIDS in recognition of our special circumstances. Further, it should also provide for cross-sectoral complementarity, cooperation, and coordination, in order to comprehensively address plastic pollution and leakages to the environment, including the marine environment.”

On the issue of voluntary measures, the PSIDS articulated that INC negotiations should firstly focus on mandatory provisions.

“That said, the instrument could enable the development of guidelines related to sustainable plastics production and consumption as well as environmentally sound management,” Mr Mulalap said.

“Such guidelines could be developed by a scientific, technical, and economic body established under the future instrument.

“In relation to National Action Plans (‘NAPs’) we support provisions in the instrument that require Parties to develop and implement these documents. Indeed, we view NAPs as being a core element of the instrument, through which Parties set out the specific policies and measures that they will take to prevent, reduce, and eliminate plastic pollution, including in the marine environment.

“On a related note, given the likely technical, logistical, and financial challenges of developing and implementing NAPs, we envision the instrument mandating the provision of financial support and other means of implementation to developing countries, particularly SIDS, for the development and implementation of our NAPs, including support for Parties’ reporting on our efforts to implement those NAPs under transparency arrangements established by the instrument.”