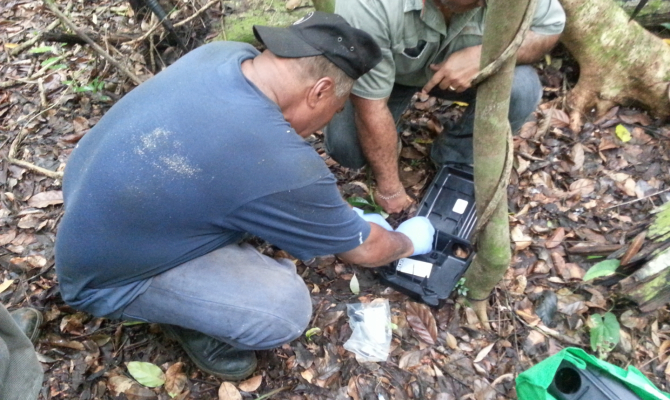 17 September 2020 - The Pacific islands region was highlighted for its’ management of invasive species, in the fifth Global Biodiversity Outlook launched by the UN Convention on Biological Diversity (CBD) this week.

The Global Biodiversity Outlook 5 (GBO-5) is a final report card on progress made against the 20 Aichi Biodiversity Targets, agreed to by country parties to the CBD in 2010 with a 2020 deadline.  The report states only six targets were partially achieved by the 2020 deadline, one being Target 9 on Invasive Species.

“Pacific communities understand their relationship with nature and have become more active in protecting and conserving biodiversity, including the notable eradication of invasive alien species as highlighted by the Global Biodiversity Outlook 5 report,” said Mr Stuart Chape, Island and Ocean Ecosystem Programme Director of the Secretariat of the Pacific Regional Environment Programme (SPREP).

Aichi Biodiversity Target 11 was one of the six targets noted as partially achieved in the GBO-5.  This target aimed for at least 17 per cent of terrestrial and inland water, and 10 per cent of coastal and marine areas, to be conserved effectively and equitably managed.

The GBO-5 acknowledged the Cook Islands, for designating its entire Exclusive Economic Zone, an area of 1.9 million square kilometres, as a multiple-use marine park.  This increase in particular led to the greatest growth in the global protected area network of the marine environment, which is now almost ten times greater in 2020 than in 2000.

“We are proud of our Marae Moana, it is a national icon for our people.  There are 15 islands in our country and 50 nautical miles around each island is a no-take zone, our islands are responsible for managing their own space here,” said Ms Maria Tuoro, the Director of Marae Moana.

“We are now working to learn more about what lives in our ocean space so we can best understand how we can remain sustainable.  We are strengthening this knowledge through marine spatial planning and are keen to know more.”

Other Aichi Biodiversity Targets partially achieved included Target 16 which focussed on the Nagoya Protocol to Generic Resources and the Fair and Equitable Sharing of Benefits Arising from their Utilization, Target 17 called for a national biodiversity and action plan, Target 19 on knowledge and science based technologies and Target 20 focusses on mobilisation of financial resources.

The new GBO-5 report also offers lessons learned and best practices for getting on track as the state of the natural world has been declining, and highlights the impacts of COVID-19 on human activities. It challenges people to reconsider their relationship with nature, and consider what the profound impact of continued biodiversity loss and the degradation of ecosystems will mean for humans.

"While some progress has been seen around the world as identified in the report, it also highlights the urgency of change needed to save the planet, to ensure the wellbeing of future generations of human and other species,” said Mr Chape.

He hopes the GBO-5 call for a shift away from "business as usual" will be heard by global leaders and will also motivate people to mobilise and change their behaviour for the betterment of all.

Among notable highlights of the GBO-5, is the critical link between biodiversity action and the imperative of address climate change, food security and health. The report also acknowledge that the country national reports submitted to the CBD provide evidence that nearly all countries are taking steps to protect biodiversity.

The GBO-5 will have an important impact on the CBD ongoing process for developing a post-2020 framework for the Convention and the creation of a new set of global biodiversity targets for 2021-2030.

The 2021-2030 framework is currently under negotiation and will be considered at the CBD 15th Meeting of the Conference of Parties (COP-15) in Kunming, China, in October 2021 (postponed a year as a result of COVID-19).