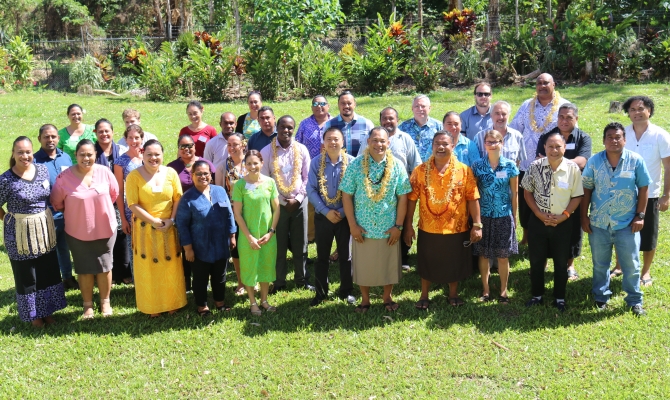 Providing Pacific island countries with an opportunity to review and discuss biodiversity issues that are of importance to the region, specifically those which will be negotiated at the 14th Conference of the Parties to the Convention on Biological Diversity (CBD CoP14), is the goal behind a preparatory meeting being held in Apia this week.

Participants from various Pacific island countries have gathered at the Secretariat of the Pacific Regional Environment Programme (SPREP) headquarters in Apia for the Pacific Preparatory Meeting for the CBD CoP14, which will be held in November at Sharm el-Sheikh in Egypt this year.

SPREP Director General, Mr Kosi Latu said, "It is my hope that the discussions and information shared during this meeting will equip our national representative with sound, informed positions as they prepare for the upcoming CoP."

“SPREP is proud to support Pacific island countries as the voices of our region, to raise the profile of Pacific issues and priorities at international fora such as this important CoP,” Mr Latu added.

“As we prepare for the conference in Egypt in November, this regional preparatory meeting provides us with an invaluable opportunity to consolidate and strengthen our collective participation at CoP14,” Taefu said.

“It is important that we, the Pacific, fully utilise these meetings to build and strengthen our capacities to participate effectively and speak as one and with a strong voice at these global fora.”

He also acknowledged the support of SPREP in providing an effective supporting mechanism for Pacific island countries’ preparations for, and engagement at, international negotiation processes such as the CBD.

“With support from partners like SPREP, UN Environment, UNDP and others, Samoa has utilised opportunities to participate more fully with the CBD including at High Level sessions . We were also supported in our decision to sign on to the Nagoya Protocol of the CBD, as well as in hosting a successful Ministerial Meeting on Shark Conservation this year, followed by the declaration of our Exclusive Economic Zone as a Shark Sanctuary,” Taefu added.

Mr Lijie Cai, Programme Officer from the Secretariat of the Convention on Biological Diversity delivered a message from the Executive Secretary of the CBD, which highlighted the importance of better understanding and valuing the interconnections between societies, economies and nature as a basis for delivering on global commitments.

“I call on all governments to send a clear message at CoP14 that safeguarding biodiversity is fundamental to our survival and to the well-being of everyone, everywhere,” Mr Cai said.

He also noted that this year marks a quarter of a century of work under the Convention, and that the Secretariat invites all participants to celebrate their 25th anniversary in Sharm el-Sheikh. As such, there exists a need for the Secretariat to review the progress made through the last two and a half decades, recognizing the achievements attained, the measures to scale up, and the additional approaches that need to be taken.

The Head of the UN Environment Subregional Office in the Pacific, Mr Sefanaia Nawadra congratulated the participants on the work they had been doing in their own countries and went on to stress the importance of partnerships, especially in the Pacific region.

“The Pacific is quite known for punching above its weight in the global arena, and we do that through our partnerships within the region. I would like to urge you all to continue that partnership at the CBD CoP14.”

He also encouraged those who have had prior engagement with CBD CoPs to share their experiences with those who may not have as much experience.

This week’s preparatory meeting is organised through a joint partnership between SPREP, UN Environment and the Secretariat of the Convention on Biological Diversity, as well as from across SPREP and related projects including the African Caribbean and Pacific Multilateral Environmental Agreement (ACP MEA) project and the UN Environment-SPREP GEF funded Access and Benefit Sharing Regional project.