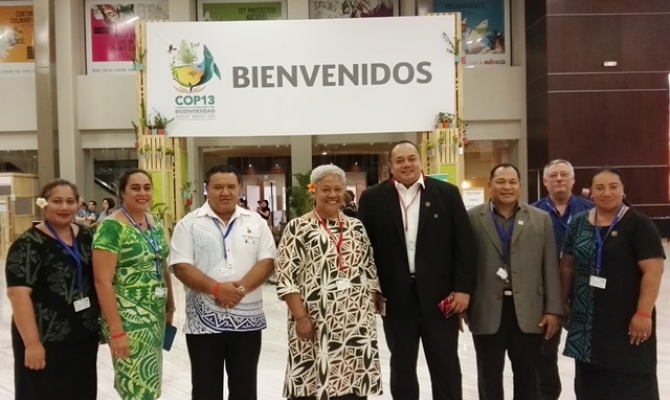 Island and Ocean Ecosystems
3 December 2016, CBD COP13, Cancun Mexico - The Cancun Declaration on Mainstreaming the Conservation and Sustainable use of Biodiversity for Well-being was officially adopted today at the closing of the High Level Segment of the Thirteenth Conference of the Parties to the Convention on Biological Diversity (CCBD COP13) in Cancun.

The declaration outlines the commitments of CBD Parties to 18 actions for integration of biodiversity into the agriculture, forestry, fisheries and tourism sectors to halt the loss of biodiversity across the world. It was adopted after months of consultation with CBD Parties, ending with a series of high level roundtable discussions.

For the very first time, these discussions included the participation of Ministers from the four development sectors.

"It is critical that we build on this historic opportunity in terms of biodiversity conservation for the future. It is time that we make stronger efforts to bring together biodiversity conservation and development. These two themes are not mutually exclusive but should be reinforced as complementary," stated the Deputy Prime Minister of Samoa, Hon. Fiame Naomi Mata'afa on behalf of the Pacific islands region at the closing of the High Level segment. 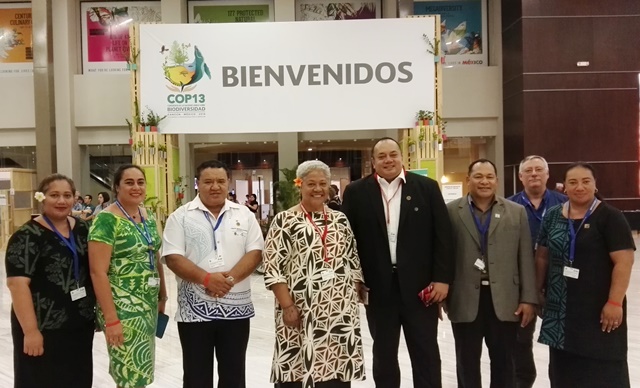 The Deputy Prime Ministers of Samoa and Tonga with the Associate Minister of the Cook Islands
as well as Pacific delegates, and the Director General of SPREP and staff

"Biodiversity provides important ecosystem services that are vital for the improvement of livelihoods of our communities and job creation, and vice versa. There cannot be meaningful development without conserving and restoring biodiversity and ecosystems."

Several of the 18 action commitments include increasing and strengthening ecologically representative and well-connected systems of protected areas and other effective area-based conservation measures; incorporating biodiversity values into national accounting and reporting systems; and strengthening institutional support and capacities for biodiversity mainstreaming.

"Biodiversity in the Pacific is under threat as never before. The challenges facing biodiversity in our region are unique, immense and they are growing," presented Deputy Prime Minister Fiame Naomi Mata'afa.

"Although some progress has been made in mainstreaming biodiversity across key development sectors, we do recognise the need to intensify our implementation efforts to ensure biodiversity and ecosystem services are effectively and adequately mainstreamed at all levels."

Over the two days of High Level Roundtable Discussions, there was a call from the Deputy Prime Ministers of Samoa and Tonga for the Cancun Declaration to recognise the key outcome of the Third UN Conference on Small Island Developing States Conference (SIDS), which is in line with the overall goals of the Declaration.

This was further reiterated during the closing statement made on behalf of the Pacific islands region to nearly 200 Ministers and their representatives that took participated in the High Level event.

"The Pacific island countries continue to emphasise the importance and relevance of the SIDS Accelerated Modalities of Action (SAMOA) Pathway in achieving sustainable development through durable and genuine partnerships. We urge SIDs and CBD Parties to utilise the SAMOA Pathway to achieve the objectives of this conference. In this regard, we call on donors, development partners and organisations, to work with us to realise and achieve these goals," noted Deputy Prime Minister Fiame Naomi Mata'afa.

"We look forward to a successful implementation of the Cancun Declaration."

For more on the Cancun Declaration please visit: https://www.cbd.int/cop/cop-13/hls/in-session/cancun-declaration-draft-dec-03-2016-pm-en.pdf