Partners showcase “One in Spirit” through Greening of the Games 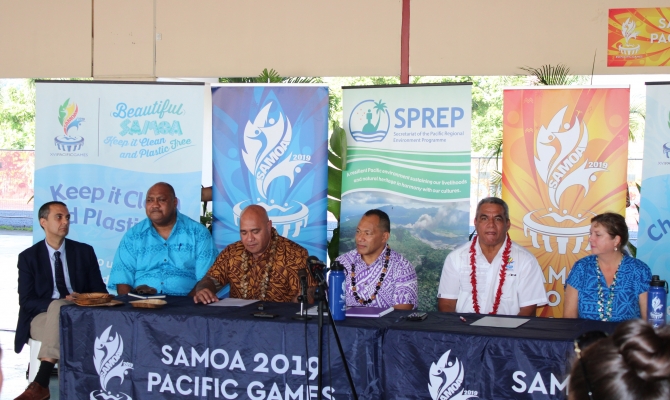 Four days out from the Samoa 2019 Pacific Games, several international development partners have stepped up and, in the true spirit of the Games, pledged their support in bringing about the first ever “Green” Pacific Games.

The Greening of the Games initiative, which is under the banner of “Beautiful Samoa – Keep it Clean and Plastic Free”, is co-chaired by the Ministry of Natural Resources and Environment (MNRE) of the Government of Samoa and the Secretariat of the Pacific Regional Environment Programme (SPREP).

It is a series of waste management and awareness activities, with the aim of reducing the consumption of single-use plastic bottles, flatware and polystyrene packaging at sporting venues, accommodations, and restaurants during the two-week period of the Games.

It is no small feat for a Pacific island country to undertake, which is why several international development partners have stepped in to help execute the first ever “Green” Pacific Games.

A total of SAT $400,000 was officially signed over to the Pacific Games office by SPREP this morning , through the assistance of the Agence Française de Développement (AFD), Government of Australia, Government of New Zealand, United Nations Environment Programme (UNE) and the United Kingdom.

“On behalf of the Government of Samoa, I would like to thank the co-chairs of the Greening of the Games committee, Leota Kosi Latu and Ulu Bismarck Crawley for your vision and leadership in carrying out the task of executing the first Green Pacific Games,” said Loau.

“I would also like to thank the partners who are present here today for lending your support to this important initiative, which will not only benefit those who will be taking part in these Games, but will benefit Samoa’s development as we continue to forge ahead in our efforts to eradicate single-use plastics.”

SPREP Director General, Mr Kosi Latu, spoke on the importance of the Greening of the Games campaign in changing the behaviours and mindsets of Pacific island people and bringing about a different paradigm where we begin to live in a plastic-free world.

“Our gathering this morning reflects a milestone in terms of Greening the Pacific Games. There have been attempts to carry this out in previous years, but this is the first time there has been a serious effort by a host country to execute a “green” Pacific Games, and it would not have been possible without the support of our partners,” said Mr Latu.

“What we are seeing this morning is a true and genuine collaboration of partners who believe in Greening the Games and making sure that we get rid of the scourge of plastic that is now a plague and a major concern for all of us.

“The goal of this initiative is to use this platform to initiate a change in behaviour amongst our Pacific island people. The Samoa 2019 Pacific Games is the catalyst for more environmentally friendly Pacific Games to be held in the future.”

According to Mr Latu, the efforts of this first green Pacific Games will be saved and documented in order to be used at future Games, with Solomon Islands already putting their hand up that they will follow Samoa’s example.

“Last week I met with the Prime Minister of the Solomon Islands, who will be hosting the next Pacific Games in 2023, and he informed me that they are looking at adopting the same theme of a plastic-free Pacific Games in four years’ time.”

Mr Latu also went on to explain what the Greening of the Games actually entails, and how they will go about making sure that no single-use plastics will be used during the Games.

“The Greening of the Games focuses on plastic and waste management during the two-week period of games competition. We want to make sure that there are no single-use plastic water bottles used at any of the sporting venues – athletes will be given reusable hydro flasks and will have access to over 300 water stations at all venues, where they will get clean, cold drinking water. These water stations are supplied by Pure Pacific Water and Samoa Pure Water.

Members of the public who will be going along to watch the games will also have access to free drinking water through these water stations. They are encouraged to bring along their reusable water bottles, as no plastic water bottles will be sold at any of the vendors’ stalls or stores during the Games.

Another component of the Greening of the Games initiative was providing Green Guidelines for the procurement of food for all athletes, officials and volunteers. There will be no plastic or polystyrene plates or cutlery used at any of the venues, dining halls, as well as the Games village.

“To ensure sustainability of these plans post-Games, some of the water infrastructure, specifically 150 water stations that are installed at the sporting venues, will be gifted to schools, to ensure they enjoy the benefits of clean, cold drinking water, and to further reinforce the message of using reusable drinking bottles.”

“In addition, athletes and officials were encouraged to offset their carbon footprints for when they travel to Samoa, by planting trees in their home countries before they depart. The 2 million trees campaign, spearheaded by MNRE, will also provide opportunities for athletes, officials and spectators alike to plant trees during the two-weeks of the Games.”

Representatives of the partners to the Greening of the Games all echoed congratulatory messages to the Government of Samoa for their leadership in undertaking the first plastic-free Pacific Games.

The Australian High Commissioner to Samoa, Ms Sara Moriarty, said, “On behalf of the Australian Government, I would like to congratulate Samoa for once again showing their leadership in the region and for setting a great precedent for the Pacific Games.

“We are proud to have been a partner of SPREP for many years and are very pleased to be supporting this initiative which they have undertaken in collaboration with the Government of Samoa to combat the issue of plastic pollution.”

“The challenge is really in changing behaviours and one of the ways we can achieve that is by getting people whom we all look up to, to try and set a good example. I think we can all agree that sport is very important to the people of the Pacific, and so using a platform such as this is exactly what we need to try and get our people to change their behaviours.”

Mr Pati Gagau, First Secretary of Development, who spoke on behalf of New Zealand at the signing ceremony, said, “New Zealand is delighted to be supporting the Government of Samoa through this initiative brought about by the Pacific Games office, MNRE and SPREP.

“We would also like to acknowledge our fellow donor partners – our coordinated efforts have enabled us to make a far greater impact than we would have otherwise achieved alone,” Mr Gagau added.

Mr Rob Contractor of the British Consulate in Auckland also echoed the same message relayed by his counterparts, and congratulated Samoa on behalf of Great Britain for this momentous achievement.

For more information on the Greening of the Games, please contact Mr Anthony Talouli at [email protected].