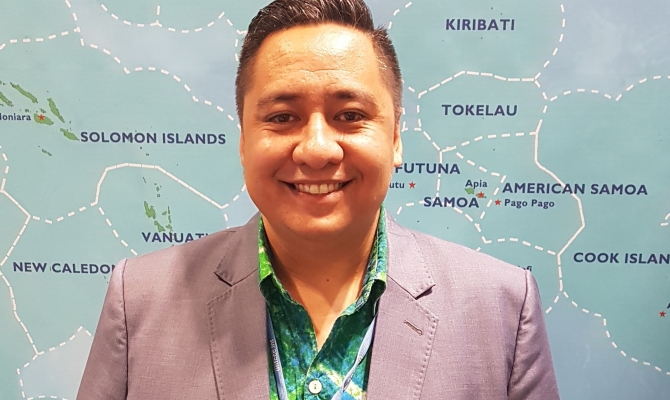 Q: How did you come to be involved in the climate change space?
A: Through my work with a Non-Governmental Organisation in the Cook Islands called Te Ipukarea Society (TIS).  My work with TIS was trying to get more young people involved in environmental conservation and during my time there, there was a leadership forum for Pacific youth and the key topic of discussion for this regional meeting was climate change and that was organised by SPREP and since then I had a keen interest in climate change, I’ve worked in the area for quite a while now.

Q: What is an issue or issues of importance to you country and to the Pacific that you’ve been following here at COP25?
A: Issues that I’m following right now is transparency which looks at accountability through reporting on countries ambitions in relation to their Nationally Determined Contributions, other areas that interest me within the negotiations process is definitely the adaptation issue, issues related to climate finance, especially the mechanisms that have been set up by the convention as well as Loss and Damage.

Q: What advice would you have for young Pacific Islanders who would also like to be involved in this space?
A: Give it a go, see if you like it, it’s not for everyone, however you wont know unless you try.