The journey towards resilience – are you in the VAKA with Tokelau? 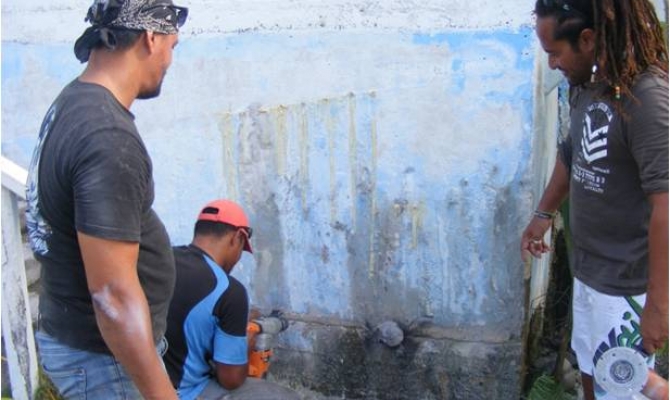 (Image:  The Pacific Adaptation to Climate Change Plus Project in Tokelau included the repair and upgrade of water tanks, as well as new tanks, resulting in the availability of water for people in Tokelau increase by tenfold)

9 December 2019, Madrid, Spain – The premiere of VAKA, the story of Tokelau’s response to climate change was launched at the Moana Blue Pacific Pavilion during the Twenty fifth Conference of the Parties to the UN Convention on Climate Change in Madrid, Spain from 2 – 13 December, 2019.

Tokelau is a global leader demonstrating its commitment for a better world.  Despite its very low greenhouse gas emissions – Tokelau contributes to 0.040% of New Zealand’s total emissions - Tokelau is also the first country in the world to source 100% of its electricity through renewable energy.

With a population of over 1,500 – Tokelau consists of three atolls in the Pacific islands – Atafu, Fakaofo and Nukunono.  It has a total land area of 12km2 and an Exclusive Economic Zone of close to 320,000.

A documentary filmed in Tokelau that tells the story of their response to climate change at COP 25 was produced with support from the New Zealand Ministry of Foreign Affairs and Trade by Massey University film students.

“Since 2017 when Tokelau asked New Zealand to extend the application of the UNFCCC and Paris Agreement to include Tokelau, we stepped up our joint engagement in the multinational climate change arena in the UNFCCC and we are one team,” said H.E Kay Harrison, New Zealand’s Climate Change Ambassador.

“Our shared mission at the UNFCCC is to experience New Zealand’s commitment to standing with the Pacific on climate change.  While both New Zealand and Tokelau may be small, leading by example to reduce greenhouse gas emissions bolsters our ability to create change, New Zealand wants to amplify Pacific voices to give them the microphone on the climate change that’s why we seized the opportunity to work with Massey University in New Zealand on this project.”

VAKA tells the story of how traditional knowledge and customary wisdom is interlinked with modern technology in Tokelau’s strive for resilience and response to climate change.  As the three small low-lying atolls of Tokelau are three to five metres above sea level, the people of Tokelau are striving to adapt to the impacts of climate change enhancing their resilience.

“It takes a village to build a future, and it took a village to make this film,” said Ms Kelly Moneymaker, Director of VAKA.

“A vaka or boat is an essential tool in Tokelau for fishing, harvesting coconuts and transportation it’s about whose in the vaka with you for support love and guidance.  It’s about moving toward the future together.  We were inspired by the resilient problem solving skills of the Tokelau people who combined their use of cultural wisdom and mod technology as they respond to climate change.”

VAKA was developed by Kelly Moneymaker, Ben Dickers, Mason Rudd, Jessica George and Rebekah Curtis-Motley of Massey University with funding from the New Zealand Ministry of Foreign Affairs and Trade.