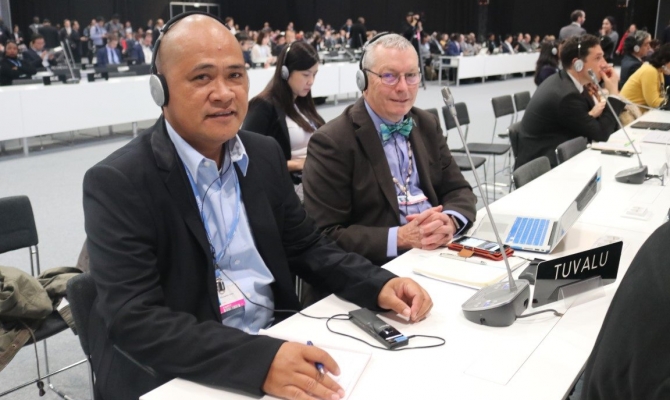 7 December 2019, Madrid, Spain – Late on a Saturday afternoon we caught up with Ambassador Ian Fry of Tuvalu (seated on right in image) who has been following the Article 6 – Markets and non-markets issue during the climate change negotiations in Madrid, Spain.

A highly technical issue, Pacific negotiators have been a strong part of discussions inside the negotiating rooms.  It’s one of the very last aspects of the Paris Rulebook to be completed – the guidebook which Parties must follow to implement the Paris Agreement as of 2020.  As such, it is one of the hardest of negotiations now underway at COP25.

Article 6 of the Paris Agreement will see countries establish a new global carbon market system to help them decarbonise their economies at a lower cost through cooperation and investment.  Negotiations are now underway to agree upon rules that govern this mechanism.

Q. How are the negotiation for Article 6 Markets and non-markets talk progressing at this stage?

A. Ambassador Ian Fry: “We’re got some real crunch issues still to resolve like the share of proceeds and under the Article 6.2 getting funds to go from the market mechanisms to the Adaption Fund, there’s still no agreement on that.  We’ve got this issue called overall mitigation and global emissions so that’s trying to get the market mechanisms deliver emissions reductions and we are getting pushback on that issue which isn’t very good.

The third one is a sort of accounting issues to ensure countries don’t double count what they are trading finding the process for doing that effectively is still a challenge and the final one is the carryover of Kyoto Protocol units so this is units generated under the Kyoto Protocol.  Some countries want to carry those over into the Paris Agreement - most countries are opposed to this but there are some big countries that want to do that.  So, these are the four crunch issues we still have to revolve.”

But isn’t this carry over cheating?

A. Ambassador Ian Fry: “Absolutely, it’s credits generated under the Kyoto Protocol which were done by countries individually anyway and they want to carry that into the Paris Agreement and they are two separate agreements.”

So how do is this justified?

A. Ambassador Ian Fry: “Well big countries who have done this say we need to have an ongoing signal to our industry that there is an ongoing process but they knew that under the Kyoto Protocol which ends in 2020 so it just makes no sense.”

Q. So what happens from this point onwards – are you still in the rooms negotiating?

Yes we’re still negotiating I know the new version of the text is to come out tonight and will probably go into an informal session tonight we may have to reconvene again on Monday and then it will go to Ministers.

Q. Why is this so important for the Pacific, why are we still pushing on this in the negotiations?

A. Ambassador Ian Fry: “Well it’s critical I mean the carbon market can either help improve an issue or it can undermine ambitions so we’re making sure that it’s not going to undermine all efforts to reduce emissions.  We’re the sort of conscience of this whole process, trying to make sure the carbon market is not a way for countries to escape their obligations and there are some large countries in our region who are probably the worst in this area so we have to apply some checks and balances.

There is a lot of pessimism from those outside the negotiations that are saying that an agreement won’t be reached here – but there is still hope isn’t there?

A. Ambassador Ian Fry: “I suspect there will be an outcome on markets, it’s at a very high level now the UN Secretary General has seen the text and he wants to know about this issue so there are heads of state talking to each other on this issue so I suspect we won’t be able to leave here without a decision.”

The UNFCCC COP25 is held in Madrid Spain from 2 to 13 December, 2019.  For more information please visit www.unfccc.int