Three point Q and A with Wayne King, Climate Negotiator of the Cook Islands on Article 6 – Market mechanisms. 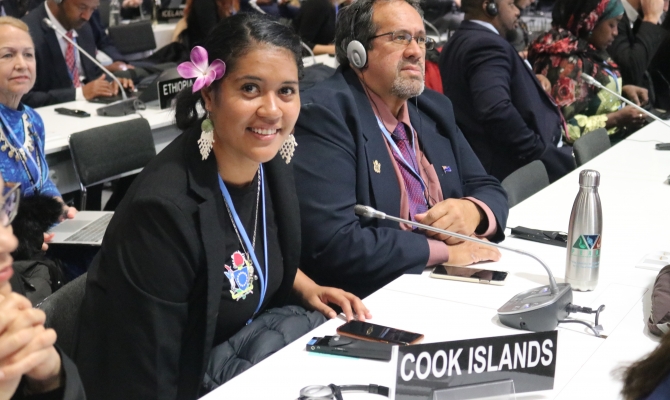 5 December 2019, Madrid, Spain - Here at the Twenty-fifth Conference of the Parties to the UN Framework Convention on Climate Change, you hear of Article 6 – Markets and non-market mechanisms, dominating negotiation discussions along the corridors, in the rooms and even in personal discussions.

It’s one of the very last aspects of the Paris Rulebook to be completed – the guidebook which Parties must follow to implement the Paris Agreement as of 2020.  As such, it is one of the hardest of negotiations now underway at COP25.

Article 6 of the Paris Agreement will see countries establish a new global carbon market system to help them decarbonise their economies at a lower cost through cooperation and investment.  Now underway are negotiations to agree upon rules that govern this mechanism.

With only two days more to go to negotiate Article 6, we spent time with Mr Wayne King, a Climate Negotiator of the Cook Islands in Madrid, Spain to find out how Article 6 negotiations are going.

Q. Mr King, it seems that Article 6 is dominating the negotiations here at COP25 in Madrid, Spain – as a Pacific negotiator, how are these going so far?

Wayne King:  “In a word – challenging, I think we’re getting pushback on a number of areas from our negotiating partners and one of the issues actually is a process oriented, rather than an issues oriented one, one where we are not in face to face negotiations.  We are actually using our co-facilitators as conduits and now they want an exchange of views on very technical issues, so right now everything is hanging in the balance.”

Q. What does it mean for us in the Pacific if we can get what it is that we are negotiating for?

Wayne King:  “If we don’t get an agreement on Markets including some of the robust rules we are looking for, it means there is an opportunity for “leakage” and what I mean by that is that the ambition of the Paris Agreement goes down.  We want to raise ambition, we want to meet that 1.5 Degree global warming target but any rule that allows slippage or “leakage”, is a term that we use that means loose rules, that will allow some Parties including the private sector to bypass those rules.  If that happens then we will face major problems in achieving the Paris Agreement, and as science has shown us – if we don’t meet it, then our world is in a lot of trouble.”

Q. “How much time does the Pacific have to negotiate?”

Wayne King:  “Definitely not enough.  I think this is where the Ministers that are arriving will need to be well briefed, and delegations have to work collectively with these Minsters because they are going to be the ones that make the interventions to resolve these difficult questions, or not.  We basically have two more days before there is an assessment of the key issues, whether they can be resolved or not, and then it will go to our Ministers to make decisions. So for the Pacific, and the Alliance of Small Islands States (AOSIS), collectively we are very much in a tipping point position.”

This week is week one of the UN Climate Change negotiations now underway in Madrid, Spain.  The “asks” from the Pacific and Small Islands Developing States are still being negotiated.