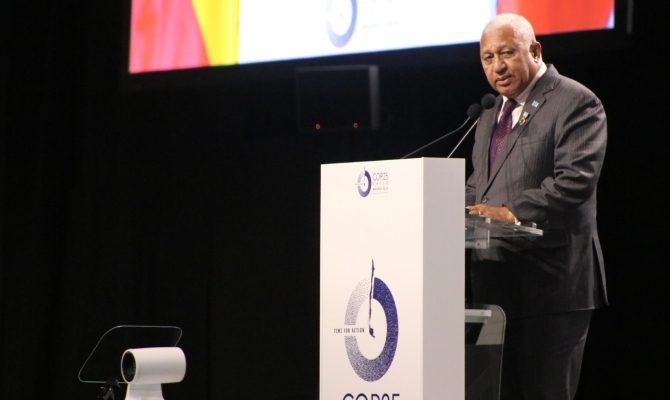 10 December 2019, Madrid, Spain - Pacific Small Islands Developing States united today under a shared voice raised by the Prime Minister of Fiji during the High Level Segment of the Twenty-fifth Conference of the Parties to the UN Framework Convention on Climate Change.

Fiji, as current Chair of the PSIDS, raised the range of challenges faced by the Pacific and other Small Islands Developing States, when it comes to negotiating the Paris Rulebook – the guidelines for implementation of the Paris Agreement.

On 12 December 2015 at COP21 in Paris, France that Parties to the UNFCCC reached the historical Paris Agreement, with the overall goal to bring global warming to 2 Degrees Celsius or even lower to 1.5 Degrees Celsius.

It was also at COP21 also that the Intergovernmental Panel on Climate Change were asked to develop three Special Reports.  One on the impacts of a 1.5 degree world in comparison to 2 degrees of warming which was released in 2018, the second being a report on climate change and land, and the other being a report on climate change and our ocean and cryosphere – both of which were released this year.

AT COP24 in Katowice, Poland – the Alliance of Small Islands States negotiated to have the IPCC Special Report on 1.5 endorsed yet was met with much resistance.  This year it is hoped the science from the Special Reports on land, and ocean and the cyrosphere will be taken into consideration when decisions are made.

“The Pacific is concerned that humanity is on the cusp of another terrifying crisis:  the abandonment of science.  While our climate change projects have to be science-driven and evidence-based in order to be approved, certain actors are happy to pay lip services and not meet the demands that well-established science has revealed,” said Hon. Josaia Voreqe Bainimarama, Prime Minister of Fiji.

“Worse still, others have put on blinders, and are denying the very existence of an immense wealth of information and science.”

The Prime Minister of Fiji also called upon the world to adjust its course to avert catastrophe and take ambitious steps forward instead of attempts to rewrite the Paris Agreement to bring forward carbon credits that were already created under the Kyoto Protocol.

“As nations on the front lines of devastating cyclones and catastrophic sea level rise, we are united by a shared resolve to meet the climate emergency with boldness and with ambition,” said the Prime Minister.

“This sense of ambition must carry us –– and the world –– forward as we prepare for COP26 in Glasgow. But that essential ambition is far off course, as our priorities here in Madrid have run into challenges that, much like the crisis itself, are man-made.”

“The negotiations on market mechanisms must deliver robust rules and regulations that protect environmental integrity, prevent double-counting, promote an overall mitigation of global emissions, and provide an avenue for more reliable resources to be used for rapid adaptation.”

The Pacific Small Islands Developing States are asking for the Nationally Determined Contributions to be aligned to common, five-year timeframes, as well as an agreement on the governance modalities, procedures, and guidelines for carbon markets under Article 6 without delay.

When it comes to the Loss and Damage agenda, the Pacific Islands are negotiating for the establishment of a new financing window within the Green Climate Fund to do so.  They are also calling for the USD 100 billion dollar climate finance goal to be reached by 2020 as well as to start work on setting a new collective goal for climate finance for 2025 and beyond.

“For the survival of the Pacific Small Islands Developing States, and for the world, we must set a stage not of ignorance and denial –– but of ambition –– for COP26,” stated the Prime Minister.