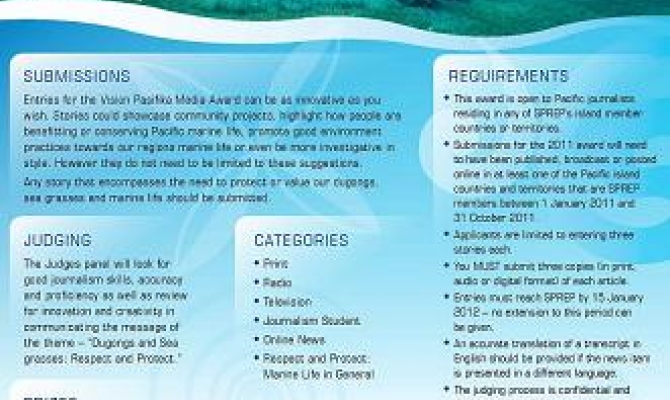 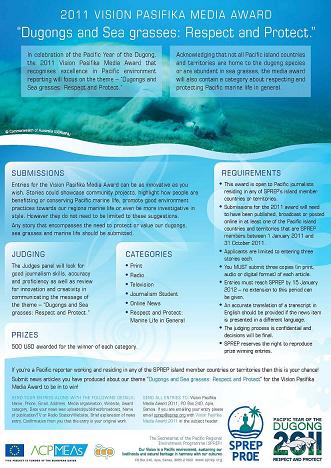 celebrate and commend Pacific journalists for their role in raising environmental awareness.

The theme for the 2011 Vision Pasifika Media Award was "Dugongs and Sea grasses: Respect and Protect", and called upon Pacific media workers throughout the region to submit their news items on dugongs, sea grasses, and marine life in general.

"SPREP is pleased to be able to commemorate and award Pacific reporters that help raise the awareness of environmental issues," said Nanette Woonton, SPREP's Media and Public Relations Officer.

"Last year was a very important year, targeted towards protecting the Dugong and sea grasses, to read the feature story entries on the Dugong, was encouraging. Congratulations to those that won awards."

Due to the rarity of the occurrence of dugongs in the region, and to the general nature of the entries submitted, four entries were given special awards to recognise their efforts in raising awareness about protecting marine species and the environment through the media.
Each of the special awards was USD 250.00.

SPREP would like to acknowledge and thank all Pacific reporters who submitted their work for the Vision Pasifika Media Award 2011 and to acknowledge the role of the judging panel.

Click for more information on the 2012 Vision Pasifika Media Awards.

Mr Moffat Mamu
Moffat Mamu , a graduate of USP, is a senior reporter with the Solomon Islands' largest daily newspaper, The Solomon Star, based in Honiara, and has been with the paper for ten years.

He is responsible for the business and environmental beat but was recently appointed Acting Editor. Despite his new role, his interest in climate change and the environmental issues still remains and he always ensures issues related to these issues are promoted in the paper. At times he writes on issues relating to these two areas as well.
Mr Mamu has been recognized twice by the Asian Development Bank Institute (ADBI) based in Tokyo, Japan, a sister organization of the Asian Development Bank (ADB), for his contribution in raising issues of climate change in the Asia- Pacific region. He received two awards from ABDI; first in 2009 when he won the Climate Change category out of the Asia-Pacific region entrants, then in 2010 he was awarded again as the second runner-up in the climate change category for the Asia-Pacific region.
In 2009 Mr Mamu first participated in the SPREP-organised competition based on the theme climate change and was the winner in the print category. This was his second time to join the competition.

Mr Nigel Sandy
Nigel Sandy is from the longest island in the Solomon Islands, known as Isabel. A 26 year old

graduate from the University of South Pacific with a BA in Marine Affairs and Geography, he had never dreamt of being awarded any journalism awards.
He graduated in 2009 and was without a job for a year. He joined the Island Sun newspaper in November 2010 as a part time reporter and since then has been there as a reporter.
He attended the inaugural Pacific Emerging Environment Leaders (PEEL) Forum in 2011, and is a current member of the PEEL network.
He would like to dedicate this award to God, his family, and his bosses and colleagues at the Island Sun Newspaper. 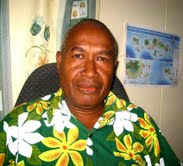 Disaster Management Office of the Ministry of Home Affairs until it moved into the Ministry of Environment, Climate Change, Disaster Management and Meteorology in 2011.
In 1985 he published a collection of short stories called The Confession and Other Stories. In the late 80s and 90s he helped to publish Solomon Islands Writing with the Waikato University of New Zealand, and Pacific Quarterly Moana, a regional literary magazine of the South Pacific Cultural and language studies under USP.
He is now the Communications Officer for the Tina River Hydro Development Project of the Ministry of Mines, Energy and Rural Electrification.
He is also a co-founder of the Solomon Islands Creative Writers Association. Other co-founders are Sam Alasia, late Celestine Kulagoe and others. 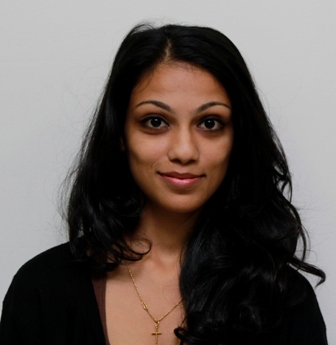 majoring in the disciplines of Journalism and Marine Affairs with the University of the South Pacific. She has also completed a Foundation Science program in 2008.
She holds a special interest in issues of the good governance of natural resources, especially marine resources.
Previously, she has interned with FijiTV Ltd's Fiji One News team, and with Fiji's national daily, The Fiji Times in 2010 and 2011, respectively.
She will be leading a team of reporters as Editor for the May issue of Wansolwara, the USP Journalism School's newspaper.