“By 2030, the resilience and health of reef ecosystems in the Pacific islands are improved.”

Coral reefs of the Pacific

Coral reefs occur throughout the Pacific islands. There are no other places in the world where coral reefs are so prevalent and have flourished and evolved, as they have in parts of the Pacific. The Pacific region is home to approximately 25 per cent of the world’s corals. The reefs are ecologically and socially important for the islands and their people, biodiversity and economies. They nourish and stabilise shorelines, provide income through tourism and fishing, are a vital source of protein for many people, and are part of cultural identity. The region’s coral reefs not only benefit the Pacific but also the world, in terms of their contribution to biodiversity, habitat and the fishing industry

Many Pacific coral reefs are being damaged by habitat disturbance, pollution, fishing and climate change; climate change is believed to be the greatest human-induced threat to corals in the Pacific region. To prevent Pacific coral reefs degrading further, substantial effort is needed. In recent years, Pacific Island countries and territories have implemented various coral-reef conservation projects but more action is needed. A regional approach driving collaboration, exchange and partnerships is therefore vital to help secure the future of the region’s reefs and the livelihoods of its people. 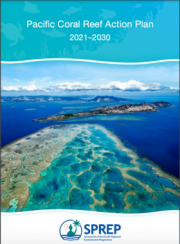 Developed with SPREP’s members and adopted in September 2021 at the 30th SPREP meeting, the Pacific Coral Reef Action Plan 2021-2030 enables leaders of Pacific Island countries, coral-reef managers and community members to coordinate their efforts to protect these valuable ecosystems. The Pacific coral reef action plan 2021–2030 intends to focus the region’s coral-reef conservation and management on four priorities over the next ten years:

Local awareness, custodianship and traditional knowledge make an important contribution to each of these priorities.

The plan identifies 8 action areas where efforts and funding should concentrate. 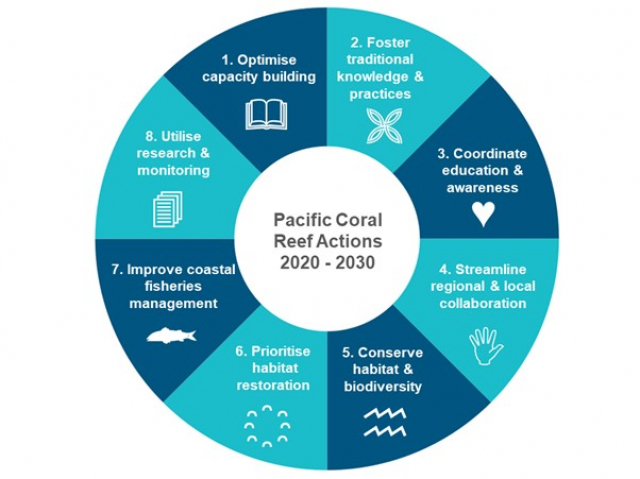 To know more about the Coral Reefs of the Pacific Island region :

•    The Sixth Status of Corals of the World: 2020 Report and its Specific chapter on the Pacific region
•    The State of Environment and Conservation in the Pacific Islands: 2020 Regional Report