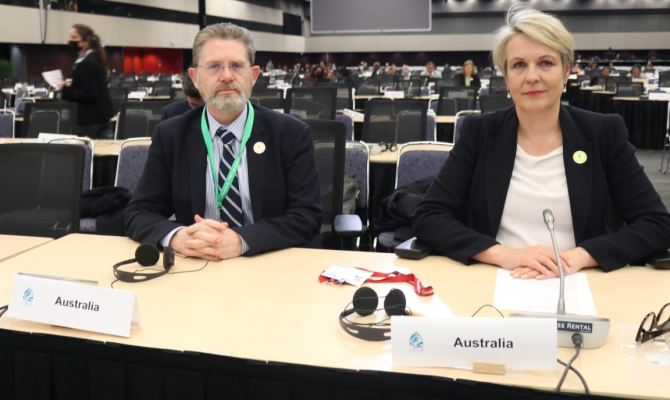 16 December 2022, Montreal Canada - As a megadiverse nation with an abundance of rare plants, animals and some of the most spectacular biodiversity on earth, Australia is committed to play a leading role in securing a historical post 2020 Global Biodiversity Framework (GBF) at the 15th Meeting of the Conference of the Parties to the Convention on Biological Diversity (COP15).

Australia’s Minister for the Environment and Water, Hon. Tanya Plibersek, expressed this on Friday night during the High Level Segment of COP15, as negotiators worked away in the meeting halls and corridors of the Palais des Congress in Montreal Canada, to try and agree on a biodiversity framework.

“We understand the stakes of this conference and we share its driving vision of a world that is net zero and nature positive, a world that is winning the fight against climate change on a path to net zero carbon pollution, while living in harmony with the natural resources that sustain us all,” Hon. Plibersek said.

Australia’s commitment, however, begins at home by transforming Australia from nature negative to nature positive. “That’s what we’re seeking to do, to turn the tide in our country from over two centuries of nature destruction to a future of nature repair,” she said.

Australia has made substantial changes in the last month, Hon. Plibersek told the plenary.

“One of our first acts as a new government was to lift Australia’s climate ambition, setting higher targets for emissions reduction by 2030, with a clear path to net zero by 2050,” Minister Plibersek said. “Australis is working with the private sector to design out waste and pollution, keep materials in use and foster markets to achieve a circular economy by 2030.”

“We will protect thirty percent of our land and sea by year 2030. We will design a new nature repair market to encourage private investment in conservation, protection, and restoration. We will reform our national environment laws from the ground up, taking them from nature negative, where they were simply managing a decline in our environment, to nature positive, where we will protect our land and sea and leave it in a better state than we found it.”

Despite all that, Australia acknowledged that no single nation can completely accomplish the goals of nature positive on its own. That’s why global agreements such as the GBF that is being negotiated and conferences like COP15 are important.

“It is why clear targets and strong goals and mutual support are so vital,” Minister Plibersek said. “Australia stands ready to lift our ambition, to support our friends and partners, particularly in the Pacific, and to face the most critical challenges facing humanity today.”

The Fifteenth Conference of the Parties to the UN Convention on Biological Diversity (CBD COP15) is held in Montreal, Canada from 7 – 19 December 2022.  Chaired by the Government of China, the CBD COP15 will result in a new Global Biodiversity Framework that will continue the Biodiversity Targets with the global goal of halting biodiversity loss.