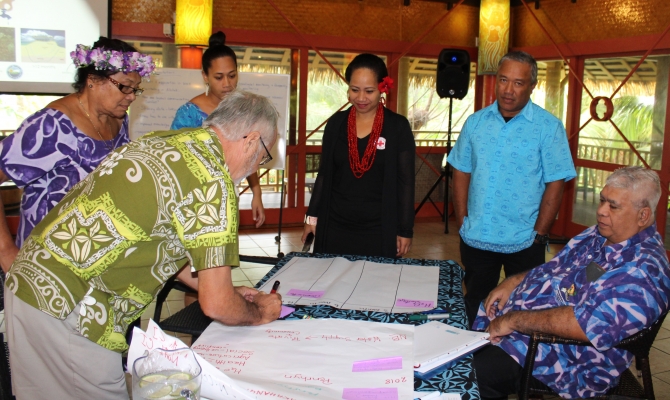 21 May 2019, Rarotonga, Cook Islands - Just last week in the presence of the United Nations Secretary General, António Guterres, Pacific Island Forum Leaders reiterated that climate change is the single greatest threat to our Blue Pacific. Given this threat, it is imperative to enable early disaster preparedness action when early warnings are received.

This week, Cook Islands stakeholders participated in a workshop to identify the impacts of year-to-year rainfall change on a range of environmental variables for example taro production. The consultation is part of a three-step process for the development of an Early Action Rainfall (EAR) Watch instigated by the Cook Islands Meteorological Services (CIMS) with the support of the Australia Bureau of Meteorology, International Federation of Red Cross and Red Crescent Societies and the Secretariat of the Pacific Regional Environment Programme.

The Cook Islands’ climate varies considerably from year to year due to the El Niño-Southern Oscillation (ENSO). ENSO is a natural climate phenomena that occurs across the tropical Pacific Ocean and affects climate globally. El Niño and La Niña are the two extreme phases of ENSO. ENSO has opposite effects on the Northern and Southern Groups. In Rarotonga, El Niño events tend to bring drier than normal conditions, while in the North, El Niño usually brings wetter than normal conditions.

Although drought is a naturally recurrent event in Cook Islands climate, scientists predict that the frequency and magnitude of drought to remain similar to current climate in the southern Cook Islands but increase slightly in the Northern Cook Islands under the high emission scenario (medium confidence).

“The southern Cook Islands were affected by drought in 1982-83, 1997/98, 2010 and more recently in 2015 in Rarotonga.  The most impacted are the Pa Enua where communication, transportation and resources are limited to support the basic services such as water supply, agriculture and health,” said the Director of Cook Islands Meteorological Services, Mr. Arona Ngari.

“The main purpose of the EAR Watch is to provide sectors with information on rainfall variation over the past 12 months and rainfall forecast for the coming months to help them better plan, prepare and respond should there be increased risk of drought or flooding that would likely trigger secondary impacts such as the outbreak of water-borne diseases.”

Ms Fine Tuitupou-Arnold, Secretary General of the Cook Islands Red Cross highlighted the simplicity of the EAR Watch as a valuable quality.

“Organisations working with communities need to be equipped to communicate climate and weather information in simple terms that all groups in the community can understand. The EAR Watch will help the Cook Islands Red cross to do this,” said Ms Tuitupou-Arnold.

The EAR Watch process has been replicated in Fiji, PNG, Samoa, Solomon Islands, Tuvalu and Vanuatu. It is implemented through the Australian Government funded Climate and Oceans Support Program in the Pacific through the Department of Foreign Affairs and Trade

“The government of Australia is proud to support the Climate and Oceans Support Program in the Pacific.  I was pleased to be part of the EAR Watch consultation, and see the Cook Islands Met Service and representatives from government departments, sectors and NGOs discussing how information on rainfall and drought can help them with their planning in the face of climate change,” said Ms Natalie McKelleher of DFAT.

The workshop was held from 20 – 21 May, 2019 in Rarotonga, Cook Islands and was attended by representatives from water, agriculture, health, disaster climate change, community representatives.