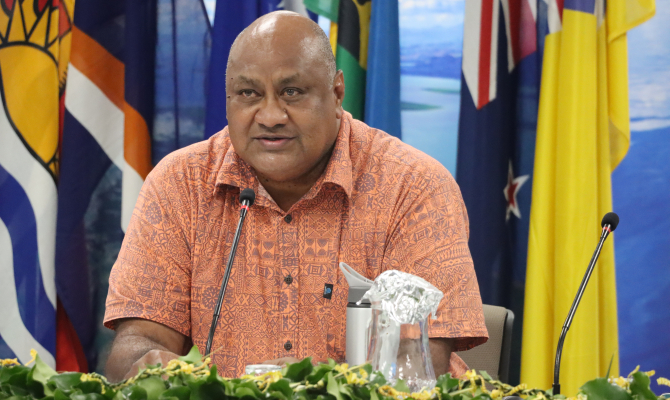 9 September 2022, Apia – The second and final day of the Third Executive Board Meeting of the Secretariat of the Pacific Regional Environment Programme (SPREP) saw the Third Executive Board members who represent the 21 Pacific island Member countries and territories applaud the Secretariat on the work that had been completed over the past year, and commit to support its ongoing efforts to realize a resilient Pacific environment that sustains Pacific livelihoods and natural heritage in harmony with Pacific cultures.

The two-day meeting was conducted via a blended platform, with Members in Apia attending in person and those from around the Pacific joining in virtually. The meeting was the first for the Secretariat under the leadership of its new Director General, Mr Sefanaia Nawadra.

The final day of the meeting started with participants observing a moment of silence which was called for by the Director General, in honour of the passing of Her Royal Majesty Queen Elizabeth II, Queen of England.

The Executive Board members agreed on the 31st SPREP Meeting to be held in Apia, Samoa in 2023. The next Meeting will be attended by the full Membership of SPREP, comprising of representatives from all 21 Pacific island Member countries and territories and five Metropolitan Member States.

It would be the first face-to-face SPREP Meeting to be held since 2019. The 30th SPREP Meeting held in 2021 was conducted virtually due to the COVID-19 pandemic and ensuing border closures.

Representative of the Micronesia group, Mr Warwick Harris of the Republic of Marshall Islands, expressed his thanks to the Chair of the 3EBM, Mr Paula Ma’u, for his leadership over the last two days, and expressed also his appreciation for the development partners who attended in person at the Pacific Climate Change Centre.

“Our thanks and appreciation also to the Director General for your leadership, as well as the team at SPREP. We look forward to working with you all to implement the programme of work that’s been laid before us,” Mr Harris said.
His words were also echoed by Mr Haden Talagi of Niue, and representative of Polynesia.

“We would like to acknowledge the hard work undertaken by the Director General and staff, especially during these challenging times. Thank you for getting the work done anyway for our people,” he said.

In closing the meeting, Mr Paula Ma’u of Tonga thanked the Members of the Executive Board and staff of the Secretariat for their cooperation which saw the successful completion of the deliberations and adoption of the meeting outcomes.

“It has been a privilege to Chair this Third SPREP Executive Board Meeting and I would like to thank the Members of the Executive Board, and the Director General and staff of the Secretariat for trusting Tonga to take you through this meeting,” he added.

SPREP Director General, Mr Sefanaia Nawadra, thanked Tonga for their leadership which ensured that the meeting flowed well and the transition between agenda items was seamless.

“I would also like to thank our Executive Board Members for the spirit of family that we have all displayed during this meeting. I believe this is what makes our region different from many other region, even though we can’t be together physically but we are still able to connect virtually.”

The dates of the 31st SPREP Meeting to be held in Apia, Samoa will be confirmed in due course.