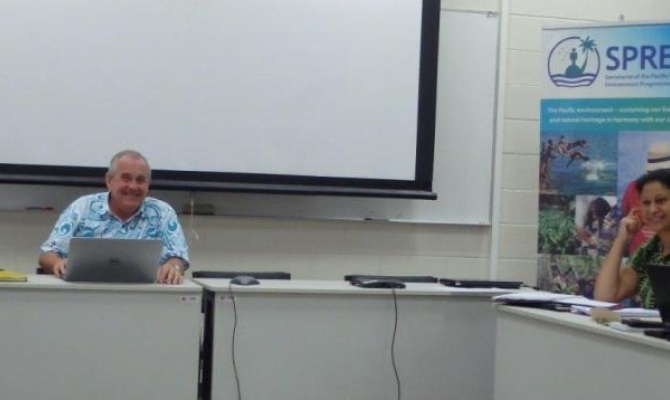 Talofa lava – it is my pleasure to welcome the MSWG back to SPREP.

A lot has happened since your last meeting, which was also held here at SPREP nearly eight months ago.

In welcoming you last May, I remarked on the growth of the Working Group, both in its size and the range of topics under discussion. This trend seems to be continuing – your agenda today is even lengthier and encompasses more topics.

Good luck to you and the Chair today ! 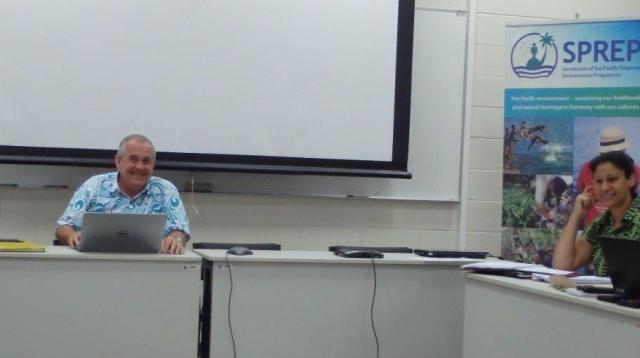 Some of your agenda items are directly or indirectly related to the meeting of the Western Central Pacific Fisheries Commission in Apia next week, but many of them are issues that have also been discussed at a number of high-level gatherings this year, including the Pacific Islands Leaders Forum meeting in Palau; the Small Islands Developing States Conference in September; the Oceans Conference convened by US Secretary of State John Kerry in June, the SPREP Annual Ministerial Meeting in October; and the World Parks Congress held a couple of weeks ago in Sydney.

I believe these meetings and initiatives, and also the expansion in the work of the MSWG, is largely due to the increasing realization, both within the region and around the world, of the crisis facing our oceans, especially from overfishing and climate change; and the limited time remaining to successfully address the key problems.

Further underlining the need for action is the pending activity in exploration and extraction of deep sea minerals. We know very little about the potential impacts of these activities on seabed and pelagic ecosystems and biodiversity, although the impacts are likely to be significant.

The challenge is how do we best assist countries to navigate the wisest direction forward on sustainable use of the deep sea ecosystems, while protecting important marine biodiversity and ecosystems, to avoid yet another mistake of human over-exploitation of a supposedly vast and immeasurable resource.

The increasing global awareness on oceans has resulted in the establishment of more major international initiatives in our region, such as the many related GEF-funded projects under way or under consideration, in which many of the agencies present at this meeting are involved.

While these initiatives provide us with a chance to link and integrate our efforts, I think that sometimes we fail to make the most of these opportunities, and our agencies are often competing rather than cooperating.

I appeal to you to ensure that the donor funds that come to the region for the protection of marine biodiversity and fisheries are leveraged and put to the best possible use to better protect and manage our Pacific Ocean and its resources.

Since we last met, of course, President Obama has greatly expanded the Pacific Remote Monument, significantly increasing the size of marine protected areas in our ocean. Pacific leaders have also announced many major initiatives to protect ocean resources and marine species.

As I asked you all last time - how do we take advantage of this commitment by Pacific leaders and also the increasing US interest to benefit the sustainability of oceanic resources and biodiversity in our Pacific region? Suggestions from the MSWG would be most welcome.

I believe Pacific Islands leaders are leading the way in defining a new paradigm for the global oceans – with conservation and sustainability as its cornerstone, particularly through the Pacific Oceanscape Framework that underpins much of the MSWG's work.

CROP CEOs and Leaders are looking to the MSWG as the key body to advise on how the Oceanscape Framework can be effectively implemented in our Pacific countries, and how it relates to the key issues of sustainable fishing and climate change.

I would appreciate guidance from you as to what the relationship should be between the MSWG and the Pacific Oceans Alliance – I note Oceanscape and the POA is on your agenda today.

I have a simple position: "if it aint broken then don't fix it". In my view the MSWG is serving as a positive means for bringing together CROP agencies and partners to discuss Oceans issues and we should be careful in setting up another parallel body with similar objectives. I also look forward to suggestions from the MSWG on this.

The MSWG is the expert body charged with providing technical advice to Pacific Island governments on a wide range of issues, and while the CROP agencies are responsible for delivering this advice, we also rely on the support and collaboration of our friends and colleagues from partner governments and civil society. I am delighted to note that several of SPREP's closest partners will be contributing here today, including Conservation International and UNEP. The MSWG is a positive example of cooperation and of dealing with the complex issues of ocean governance and management.

Thank you and please keep up the good work.

In SPREP's view, urgent action is required to protect the oceans and its wildlife for the benefit of future generations of Pacific Islanders. Many of our most iconic and emblematic species – whales, turtles, dugong and sharks – are severely depleted. Many of them languish in the category of endangered or critically endangered: for example 4 out of the 6 turtle species in our region are listed as critically endangered or endangered and the population of sharks in our region is now around 10% of initial abundance.

I am pleased to note that sharks feature prominently on today's agenda. In recognition of their importance in Pacific Island cultural identity and tourism revenues, the conservation of marine mammals, turtles, dugong and shark populations is of great concern to SPREP and to many Pacific Island Governments.

Some countries have now taken strong measures to protect sharks in their EEZs. I applaud the efforts of Fiji in securing the listings of 10 species of manta and mobulid rays on the Appendix I and II of the Convention for Migratory Species earlier this month, and I also note that the SPREP Annual Meeting last month endorsed the development of a Shark Action Plan for the region, that would be compatible with SPREP's existing Marine Species Action Plans for cetaceans, turtles and dugong.

Since your last meeting here, SPREP has also stepped up its engagement in marine pollution and the impact of marine debris on wildlife; also on tracking of vessels plying our waters, to better prevent pollution and to monitor marine protected areas; and on marine spatial planning across the region, at regional, national and sub-national scales, as a tool to integrate multiple uses, including trans-boundary issues.

We are pleased to be working on these areas with our many partners including other CROP agencies, IMO, CSIRO, SPC, IUCN, GIZ, AAMP and CI on these topics.

I can't finish my introduction without mentioning the impacts of climate change. As the recent IPCC report graphically pointed out, the oceans have borne the brunt of Greenhouse Gas Emissions over the past 40 years, and as a consequence we are beginning to witness profound changes in ocean chemistry.

Some of you participated in the workshop on Ocean Acidification held in Apia before the SIDS Conference, in which SPREP partnered with the US and NZ Governments to deliver a constructive meeting, which I hope will lead to a quantum leap in the amount of research in the region on ocean acidification, and the development of practical solutions on this issue. We welcome the involvement of partners on this issue.

I know that you have a great deal of work to get through, so let me close by observing that the role of the MSWG has never been more important. I congratulate SPC on their tenure in the Chair during 2014 and wish FFA all the best for next year.

Thank you for your efforts and please be assured that SPREP will continue our active involvement and support of the MSWG.