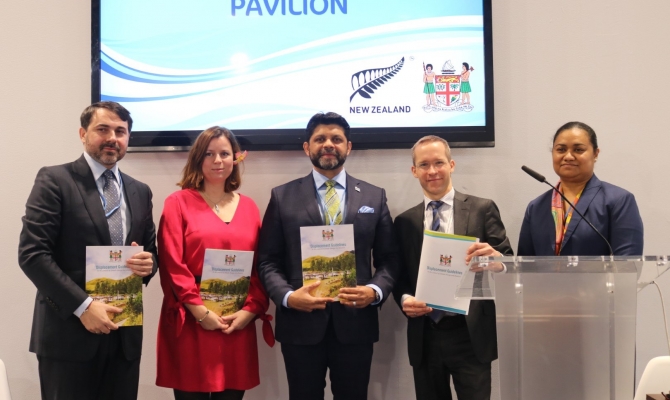 11 December 2019, Madrid, Spain – A guide to help the most vulnerable communities in Fiji relocate from the dire impacts of climate change in their villages is now available.

The Guidelines were officially launched by the Attorney General and Minister of Economy of the Fijian Government, Hon. Aiyaz Sayed-Khaiyum, during a side event at the Moana Blue Pacific Pavilion on the tenth day of the Twenty-fifth Conference of the Parties to the United Nations Framework Convention on Climate Change (UNFCCC COP25).

“Many of you here know that you will return home to safety and security. But what happens when that home is no longer the safe space, we need them to be?” Hon. Sayed-Khaiyum asked.

He revealed that the first community to be relocated in Fiji was a village in Vanua Levu, who had to be relocated two kilometres inland to escape the rising levels of the ocean. Since then, a further two communities have been relocated, and the Fijian Government anticipates many more to follow, as the impacts of climate change worsen over the years.

The Fijian Government launched its Planned Relocation Guidelines at COP24 in Katowice, Poland, in 2018. It embedded a bold national commitment to pre-emptive social protection measures.

The Guidelines for Displacement was finalised this year, with further protections in place in the event that climate and disaster related displacements occur despite adaptation and risk-reduction efforts.

Vunidogoloa in the Cakaudrove province on Vanua Levu was the first village to be relocated two kilometres inland to escape rising oceans. Since then, a further two communities have been relocated to higher ground with at least 45 other villages that will need to be relocated in the near future.

These Guidelines have been formulated taking into consideration existing national policies and international humanitarian best practices. Consultations were held in Fiji, attended by Government agencies, ministries, private sector, civil societies and academia were involved to help ensure there was a wide and inclusive basis for the development of the Guidelines.

The Government also launched the Fiji’s Climate Relocation and Displaced Peoples Trust Fund in September this year, as part of a concerted national effort to avert loss and damage and protect the most vulnerable Fijians from the impacts of climate change.

The Fund will go to research, vulnerability assessments, land-scoping exercises, and the hard cost of relocating and supporting people and infrastructure.

“It isn’t just the monetary costs of relocation and responding to displacement events that is a burden on nations such as Fiji. Even more incalculable is the trauma of moving and leaving ancestral burial grounds behind, or seeing the land you’ve farmed or harvested for generations, no longer able to feed you and your family,”

“Moving a community, ladies and gentlemen, is more than just moving a group of houses. It is about rebuilding a community and indeed a sense of community. It is about ensuring access to jobs, schools, medical services, sustainable living, all of which require detailed planning between government agencies and other organisations.

“In the events of mass displacement, the implications are major. Restabilising a situation so people are safe and sheltered can be an arduous and costly strain on our human resources, economic resources and our manpower. This is why this Trust Fund is so important,” Hon. Sayed-Khaiyum added.

The Displacement Guidelines, Planned Relocation Guidelines, and the Climate Relocation and Displaced People’s Trust briefs can be found on the Ministry of Economy’s website, www.economy.gov.fj.

The Official Launch of Fiji’s Displacement Guidelines in the context of climate change and disasters was held on 11 December 2019 at the Moana Blue Pacific Pavilion.

For more information on the Pavilion, please visit www.pacific-pavilion.com or download the Attendify App, search for Moana Blue Pacific Pavilion and create a profile to join.