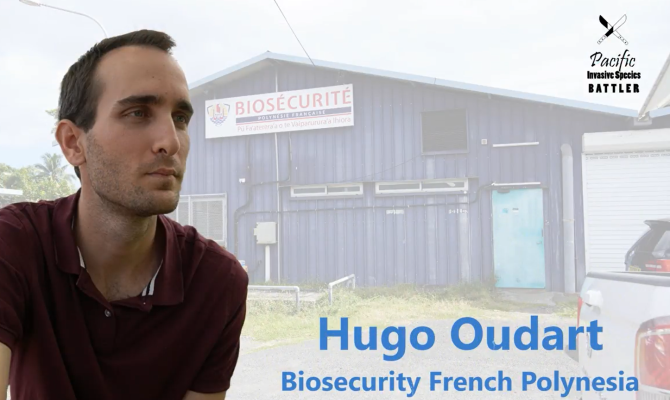 Invasive species are a major issue in French Polynesia. They endanger the fragile balance of the island’s ecosystems and threaten its unique biodiversity.

French Polynesia’s Biosecurity Department is the key agency charged with the protection and prevention of the arrival of unwanted alien species into the territory, and to protect its economy, environment, and people’s health from biological threats posed by such species.

This work has resulted in a member of the department being named the recipient of the 2022 Battler of the Year Award, as announced by the Secretariat of the Pacific Regional Environment Programme (SPREP) on the 16th of December 2022.

Mr David Moverley, SPREP’s Invasive Species Adviser, says, “The Battler of the Year Award was launched in 2017, and is presented annually to Pacific invasive species field-based practitioners who have worked at the grassroots level and achieved an outstanding outcome from the use of minimal resources.”

The official announcement revealed that the 2022 Battler of the Year Award has been awarded to Mr Hugo Oudart of the French Polynesian Biosecurity Department, a first for French Polynesia.

The efforts aim to strengthen border control under the EDF-funded PROTEGE project to avoid introduction of species such as red fire ants, fruit flies, and other harmful invasive species such as citrus tristeza virus, coconut rhinoceros beetle and bee varroosis.

Mr Oudart thanked SPREP for the recognition, which he believed belongs not only to him, but to his entire team and all of French Polynesia.

According to the Biodiversity Department, three of its agents began dog owner training in mid-November 2022 with the Ministry for Primary Industries New Zealand (MPI), a globally recognised actor in the e field of biosecurity and especially in training and the use of detection dogs. Setting up these dog detector teams will be accompanied by setting up a kennel compound ,scheduled for the first quarter of 2023.

“The work is far from over, but we already observe every day that the benefits that French Polynesia will derive from this project will be much greater than we initially imagined” Mr Oudart says.