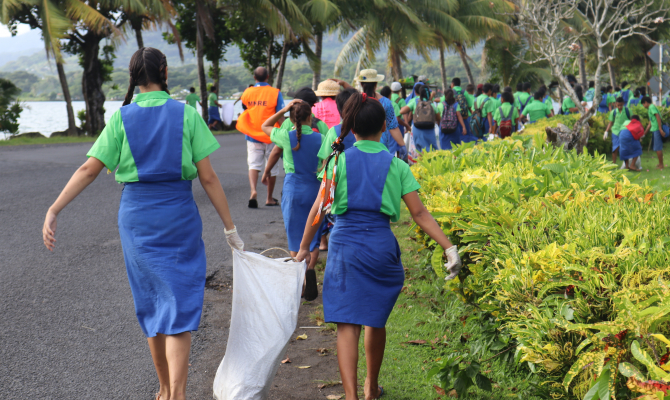 This message rang through the crisp morning air as the village of Moata’a, Samoa, and its partners, the Ministry of Natural Resources and Environment (MNRE) of Samoa, the Secretariat of the Pacific Regional Environment Programme (SPREP), United Nations Educational, Scientific, and Cultural Organization (UNESCO), University of Newcastle, and Japanese Technical Cooperation Project for Promotion of Regional Initiative on Solid Waste Management (J-PRISM II), came together to commemorate World Oceans Day. The theme for this year’s celebration was “Innovation for a Sustainable Ocean.”

Around 400 people participated in the clean-up, which collected an estimated total of 500 kilograms of rubbish from along the coast of Moata'a village. A waste audit was also conducted on a 100m stretch at the end of the clean-up, and in summary, the group of 40 persons collected 1,222 items with a total weight of 53kg, majority of these being plastic and foam items.

Ulu Bismarck Crawley, Chief Executive Officer of MNRE, said, “This occasion is not only to commemorate World Oceans Day in Samoa, but to celebrate the genuine partnerships we have with all our relevant partners in conservation, including our community, in particular the village of Moata’a.”

“On the national level, and in addition to the many collaborative efforts put in the past and present to ensure we manage our oceans and marine resources, the Samoan government is also committed to developing Samoa’s first Ocean Management Policy as part of Samoa’s voluntary commitment made at the UN Oceans Summit 2017,” Ulu added.

Ulu also called on the Government of Samoa’s relevant partners to continue working in partnership to ensure our oceans and vulnerable and important ecosystems are well and sustainably managed so they can continue to support the economy, livelihoods and human needs.

The UNESCO’s Director of Office, Ms Nisha, further reiterated Ulu’s calls for more collaboration and partnership in order to protect our oceans.

“In scientific terms, the ocean is one. But because there are different basins, we have given them different names such as the Pacific Ocean, Atlantic Ocean, Indian Ocean and so forth. Unless we do things together with the rest of the basins, the crises related to oceans will not be addressed,” Ms Nisha said.

“In order to address these crises such as ocean warming, we need to maintain collaboration and coordination at the national, regional and global level,” she concluded as saying.

The Director General of SPREP, Mr Leota Kosi Latu, stressed the importance of the ocean, especially to the Pacific region.

“98% of our region is ocean. Only 2% of it is land. We in the Pacific consume at least three times more fish than any other region in the world, and our ocean sustains at least 64% of the current global tuna trade. Our ocean supports livelihoods in the region which includes tourism, recreational activities and fisheries, and our culture and identity are linked to the ocean,” Mr Latu said.

“Many of us are working together to help the region protect the ocean and our marine resources. However, the problem is that human activities such as pollution, overharvesting of certain fisheries, agricultural and industrial run-off, and seabed mining, continue to impact the ocean adversely,” Mr Latu said.

“It is clear that we need to change our behaviour because we are saying that we need to protect our oceans, but at the same time, we continue to do harm to it through destructive human activities. This means that there is something wrong with our story, and today is an opportunity for us to make that story right,” he concluded as saying.

The commemoration concluded with a ceremonial tree planting, where partners, donors, dignitaries and members of the Diplomatic Corps were invited to plant a tree to be a record of the work that was done on World Oceans Day 2020.

His Excellency David Ward, British High Commissioner to Samoa, said, “On World Oceans Day, I welcome SPREP’s important work to protect the ocean on which our world depends. That is why the United Kingdom is working with SPREP on reducing ocean pollution, and why the UK has called on all governments to protect 30% of their ocean territory by 2030.”

His Excellency Genichi Terasawa, Japanese Ambassador to Samoa, was also present during the commemoration, and even got his hands dirty by helping the students of Moata’a Primary School pick up rubbish along the roadside.

H.E. Terasawa was quoted as saying that he “is part of this community now,” and showed his support by being present and taking part in the clean-up from the beginning to the end of the programme. The Member of Parliament for Moata’a, Tofa Lenata’i Victor Tamapua, acknowledged the Ambassador’s efforts and has promised that he will officially become a son of Moata’a in the near future, with the title “Tui-Taumeasina” unofficially presented to His Excellency this morning.

As part of its ongoing campaign to celebrate World Ocean’s Day, SPREP is also launching a webinar series on 12 June. The series, titled “Transitioning to a post-pandemic Pacific” focusses its lens on the crucial role our environment plays in the post-COVID-19 recovery plans for a sustainable and resilient Pacific. Registrations are now open at this link.

In addition, an interactive quiz to test your knowledge on the ocean will also be released on SPREP’s Facebook page soon. The quiz is part of an ongoing series of quizzes which target a diverse audience, and acts as an important outreach tool during COVID-19 lockdowns.