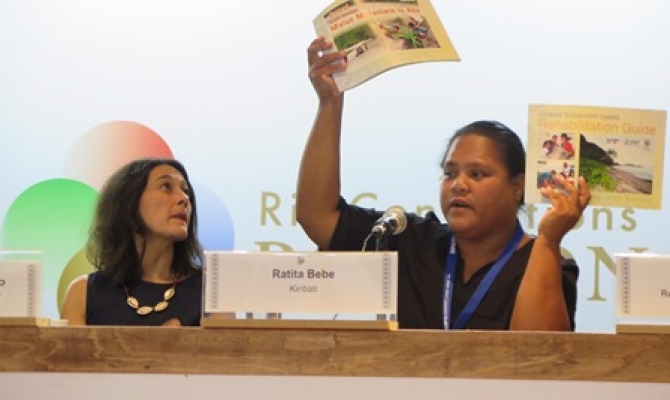 Island and Ocean Ecosystems
7 December 2016, CBD COP13, Cancun, Mexico - Natural solutions have been one of the answers for Kiribati as they have applied ecosystem-based adaptation approaches to help strengthen the resilience of the island nation.

Showcased at the Rio Conventions Pavilion at the Thirteenth Conference of the Parties to the Convention on Biological Diversity in Cancun (CBD COP13), the actions by Kiribati highlighted the strong role nature plays in protecting islands and their communities. 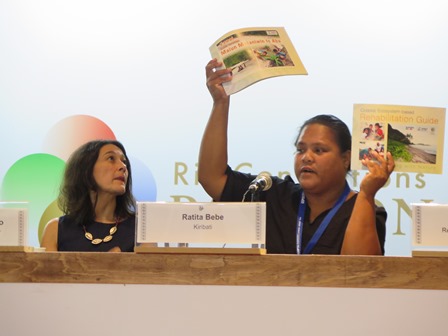 "This empowers and drives the communities as they are carrying out actions that they have helped contribute to, know and understand, and are willing to implement," stated Ms. Ratita Bebe, Assistant Senior Environment Officer, Kiribati.

A prime example of this was the work on Abaiang island in Aonobuaka village. There, the village that building seawalls, is not always the best option when trying to help communities cope with rising sea levels, wave surges or king tides.

The community banned the building of seawalls, opting instead for Te buibui, a traditional method of wall building for coastal resilience using natural materials such as branches, coconut leaves and fibre.

"The village wanted to maintain their beach naturally. So, as a whole community they came up with a strategy that provided solutions. The decision was not by made by one person who had an idea for the rest of the community, they all got together and decided on what was best for them," said Ms. Bebe.

"They believed that building a seawall is not best for them. So they established a community agreement that no person, family, or clan is allowed to build a seawall on the coastline at Aonebuka."

Monitoring has shown that sites in 2013 are showing substantial improvement with surveying finding positive accretion of sand at all coastal ecosystem-based adaptation (EbA) project sites.

Kiribati has also embarked on a mangrove planting project, starting in 2005, pulling together voluntary support from communities to help plant the mangroves to restore and protect coastal areas in Kiribati. It has been carried out in 14 islands in the Gilbert Island Group of Kiribati.

In May, 2013, Kiribati became a Party to the Ramsar Convention on Wetlands, designating Nooto as the first wetlands site of international importance, also becoming one of the mangrove planting sites.

"There have been many benefits of these natural solutions and EbA work in Kribati, with positive outcomes which have only been made possible with the support of partners that have helped us," said Ms Bebe.

"Partners have helped with coastal rehabilitation and restoration of coastal ecosystems, the activities have acted as a filter for pollution, and strong community ownership has helped raise awareness of their own roles in protecting, conserving and managing their environment."

Ms. Ratita Bebe made her presentation at the Rio Conventions Pavilion in Cancun, Mexico.

The CBD COP13 is held from 4 – 17 November, 2016. Kiribati is a Party to the Convention on Biological Diversity along with the Cook Islands, Federated States of Micronesia, Fiji, Marshall Islands, Nauru, Niue, Palau, Papua New Guinea, Samoa, Solomon Islands, Tonga, Tuvalu and Vanuatu. - #PacificProtectedAreas

To learn more about the Rio Pavilion please visit: http://www.riopavilion.org/