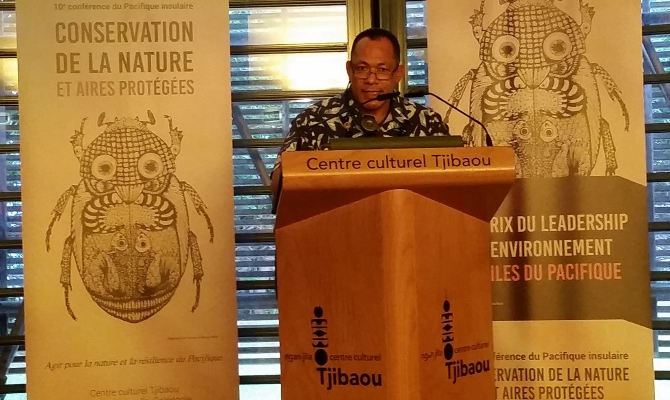 It will result in a framework to help strategically plan conservation efforts in the region over a five year period to ensure all partners work collectively towards achieving the Pacific needs – it’s a framework that is developed by the Pacific, for the Pacific and implemented in partnership with the Pacific.

The actions under this framework are needed now more than ever as the 2019 Intergovernmental Science-Policy Platform on Biodiversity and Ecosystem Services (IPBES) highlights around one million animal and plant species are now threatened with extinction, many within decades.

The conference will be hosted at the Tjibaou Cultural Centre in New Caledonia in April next year bringing together all stakeholders from across the Pacific island region.  It will also review the current Framework for Nature Conservation and Protected Areas 2014 – 2020 which was endorsed at the 2013 Pacific Islands Conference on Nature Conservation and Protected Areas in 2013 by over 800 participants.

The conference is being coordinated by the Government of New Caledonia, SPREP and the Pacific Islands Roundtable for Nature Conservation for which the Oceania Regional Office of the International Union for Conservation of Nature is the current Chair.

Next year, it is hoped the conference will see a stronger drive to halt the loss of biodiversity across the region.  A huge challenge ahead given the average abundance of native species in most major land-based habitats has fallen by at least 20% mostly since 1990.  Over 40% of amphibian species and almost 33% of reef forming corals are under threat.

“Unfortunately, ongoing loss of biodiversity in the Pacific contributes to the high levels of global loss reported by recent assessments. Across the Pacific, governments are still failing to protect critical ecosystems and the biodiversity within them, and the region is losing its mangroves and forests through unsustainable logging and coastal development,” said Mr Kosi Latu, Director General of the Secretariat of the Pacific Regional Environment Programme (SPREP).

“This compounds the impacts on coral reefs that are already declining as a result of climate change, reefs that are vital for food security, tourism and coastal protection.  The theme highlights the need for urgent and real ‘action’ now, and the need to think beyond what we are doing at the moment, which is not enough.”

The launch of the 10th Pacific Islands Conference on Nature Conservation and Protected Areas was held on 20 June at the Tjibaou Cultural Centre in Noumea.

Should you wish to find out more about the premiere nature conservation gathering of the Pacific please visit https://www.pacificnatureconference.com or please email [email protected]