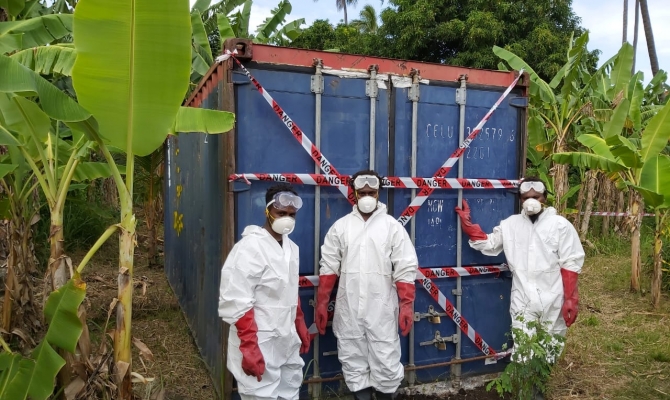 One of the most prevalent persistent organic pollutants (POPs) in Papua New Guinea (PNG), with links to cancer in humans and which is also extremely toxic to fish and marine invertebrates, is being targeted during a scoping mission in PNG through the Global Environment Facility (GEF) Implementing Sustainable Low and Non-Chemical Development in SIDS (ISLANDS) Programme.

The pesticide Dichlorodipenyltrichloroethane (DDT), was once a popular method of controlling vector borne diseases such as malaria, which was identified by the World Health Organization in 2017 as a major cause of mortality in PNG, with 94% of the population at high risk of infection.  It was also widely used across the agricultural and industrial sectors.

As a hazardous chemical, the use and disposal of DDT was regulated by the PNG Government under its environmental management regime and then under the Stockholm Convention on Persistent Organic Pollutants.

The Stockholm Convention is a legally binding international instrument, designed to gradually decrease in the presence of POPs in the environment. When the toxic effects of DDT on humans and animals were discovered in the early 70s, most countries started to ban production and use. PNG, as a Party to the Stockholm Convention, officially banned the use of the DDT in 1983.

All DDT stocks present in PNG were abandoned in warehouses and sheds around the country when the ban came into effect. Despite the ban, people still used DDT for farming, fishing and even lice treatment and control in children.

To prevent further exposure of people to the dangers of POPs, the Stockholm Convention requires all Parties to develop National Implementation Plans (NIPs) on managing these hazardous chemicals. PNG developed its NIP in 2006 which identified stockpiles of obsolete POPs around the country but could not implement it due to lack of funding support.

Thanks to the GEF ISLANDS Programme, help for PNG is on the way. The United Nations Environment Programme (UNEP) and the Secretariat of the Pacific Regional Environment Programme (SPREP) are working with PNG and other SPREP Members as part of this latest global initiative aimed at improving management of chemicals and wastes.

To help PNG prepare for GEF ISLANDS, supported by UNEP, SPREP led a scoping mission through the country in November, 2019. The fieldwork covered five provinces and seven towns including Eastern Highlands Province (Goroka and Yonki), Morobe Province (Lae), East New Britain (Rabaul), Milne Bay Province (Alotau and Misima) and National Capital District (Port Moresby). The mission was tasked to verify stockpiles of POPs as reported in the National Implementation Plan of PNG and to safeguard them in preparation for removal and disposal under GEF ISLANDS.

All reported stocks of DDT in Goroka and much of the Highlands region were found to be missing. Provincial authorities reported instances of theft which saw the DDT sold to farmers for use in gardens. However, the team was able to verify and safeguard PNG largest stockpile of obsolete DDT in Rabaul.  Two 20-foot containers filled with 1,400 boxes of DDT were discovered there by local resident Mr Joshua Wowo ten years ago.

“I would see people coming here to get DDT to put on their vegetable gardens, or kids playing with the powder, not only around the sheds but also inside of them,” said Mr Wowo, a trained Environmental Health Officer.

Knowing the dangers of DDT, Mr Wowo led an initiative resulting in the purchase of two shipping containers by the East New Britain Provincial Government to store all repacked DDT.  Unfortunately, the containers were raided by thieves with some of the DDT  being stolen.  Over time, the contents of the containers were spilled around the area, leaving the surrounding communities exposed to the DDT.

In November last year, the mission team together with Mr Wowo and members of his village cleaned up the spilled stockpile of DDT and repacked an estimated 12 tons of obsolete DDT back into the two containers which were securely locked with welded bars and padlocks.

The mission team also delivered four DDT Safeguard Trainings in Alotau, Goroka, Kokopo and Misima, based around the principles of Workplace Hazards, Hazards Identification and Risk Assessment at the Workplace.  All 40 participants of the trainings would be called upon to assist with the removal of POPs when the GEF ISLANDS is implemented.

The other most prevalent POPs chemical in PNG to come under the scope of the mission, was Polychlorinated biphenyl (PCB). PCBs are often found in used oil drained from electrical equipment such as transformers and capacitors during maintenance.

PCB-containing oils are also banned under the Stockholm Convention and PNG Power has since ceased using it. However, PCB contaminated oils have been detected by the mission team across the country.

The team collected 122 samples of used oil from transformers, capacitators, storage drums and tanks and tested them for PCB using Dexsil test kits and the results indicated possible PCB contamination in 11 samples. This translates to approximately 612,000L of potentially PCB contaminated oils that are present in the provinces visited.

“While the PNG mission was a success, the findings are concerning”, says Joshua Sam, SPREP’s Hazardous Waste Management Adviser and mission team leader.

“The information gathered from the mission is just a snapshot of the growing chemical and hazardous wastes problem in the Pacific”, he added.

“With limited capacities to manage these wastes, many Pacific Islands Countries will need help from partners like SPREP and UNEP and the GEF ISLANDS Programme presents a great opportunity for our members”.

The ISLANDS Programme is a $450-million, five-year initiative backed by the Global Environment Facility (GEF) and partners for implementation in all Small Island Developing States (SIDS). The Pacific Child Project, that falls under GEF ISLANDS is worth US$20 million. It is being implemented by UNEP with SPREP as the executing partner for Pacific SIDS. Despite the current global situation, both organisations are committed to finalising all preparations so the programme can commence in 2021.