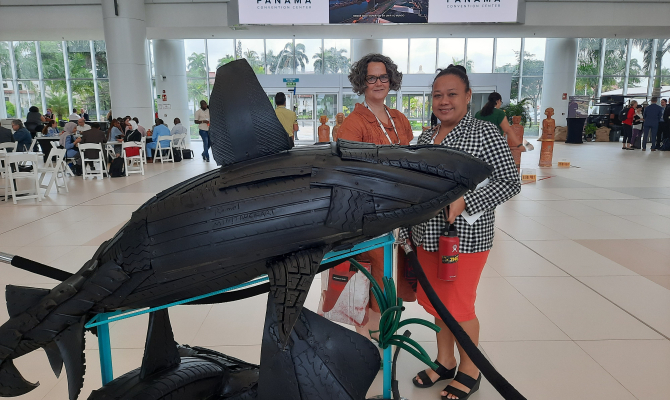 The 19th Meeting of the Conference of Parties to the Convention on International Trade in Endangered Species of Wild Fauna and Flora (CITES COP19) opened on 14 November in Panama City, Panama. The Oceania region parties are well represented with delegations from eight of the nine Oceania Parties: Australia, Fiji, Papua New Guinea, New Zealand, Samoa, Solomon Islands, Tonga and Vanuatu.

CITES is an important multilateral agreement between governments with the objective to ensure that the international trade of wild fauna and flora does not threaten their survival and maintains those species at a level consistent with their role in ecosystems.

The Secretariat of the Pacific Regional Environment Programme (SPREP) is on the ground in Panama supporting Pacific nations in negotiations. Prior to CITES COP19, SPREP hosted an Oceania Preparatory Meeting in Apia, Samoa in October 2022, providing an opportunity for Pacific nations to identify and discuss issues of concern to the Pacific. This proved crucial leading up to CITES COP19, as this year’s conference included a focus on marine species with proposed listings for sharks and sea cucumbers.

Some highlights at CITES COP19 include three species of Thelenota (sea cucumbers) proposed and agreed to add to Appendix ll. Other important proposed listings added to Appendix ll include all remaining unlisted sharks in the Carcharhinid family (e.g., blue shark), hammerhead family and coastal sharks known as guitarfish.

Pacific parties have actively made interventions highlighting capacity needs, including financial and technical support needed to enable the Pacific region to effectively implement CITES obligations stemming from the listing of these new marine species proposals as well as proposed resolutions on marine turtles and sharks.

Ms Baird highlighted the importance of the conference this year to the Pacific, “many agenda items are important for Oceania, particularly marine species which are important for trade. Additional listings will support improvements to sustainable harvest management for international trade.”

SPREP has continued its support of Pacific CITES Parties including the development of non-detriment findings (NDFs). NDFs are critical to ensure the export of any specimen will not negatively impact the survival of that species in the wild and are a prerequisite to allow legal trade. Through the Pacific European Union Marine Programme (PEUMP), SPREP has supported other CITES capacity needs. However, this programme’s term is nearly completed, and further assistance is urgently needed to support Pacific Parties.

The 19th Conference of the Parties on International Trade in Endangered Species of Wild Fauna and Flora (CITES COP19) is being held in Panama City, Panama from 14 to 25 November 2022.

It is being attended by Pacific leaders and their delegations, who are advocating for their survival.