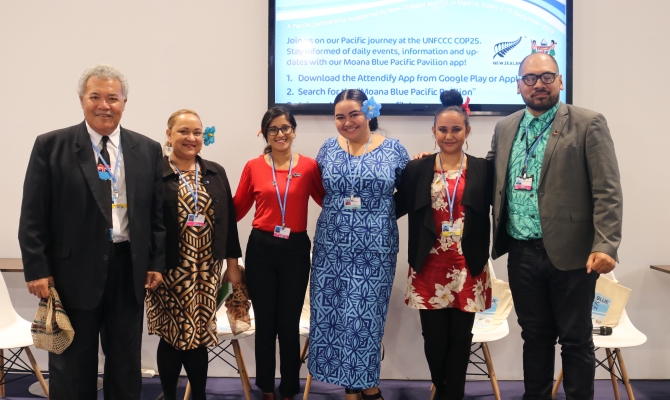 6 December 2019, Madrid, Spain – With climate change being consistently identified as the single greatest threat to the security and livelihoods of Pacific peoples, more and more young people in the Pacific region are demanding a seat at the table and a voice in the climate change space and in development of climate change policies.

The Director of the Climate Change Resilience programme of the Secretariat of the Pacific Regional Environment Programme (SPREP), Ms. Tagaloa Cooper-Halo, has reaffirmed the support of SPREP in the involvement of youth in these processes.

But, she said, these opportunities also come with responsibilities, in order to gain the attention of world leaders in this space, and credibility, youth must be responsible for their voice and actions in the spaces provided.

She identified opportunities that currently exist within SPREP for Pacific youth, for example, there are opportunities for young graduates, which presents qualified youths with a chance to apply for employment at the Secretariat.  The Pacific Islands Forum Secretariat, through its Small Islands States Programme will next year support three Pacific Island young professionals to be attached to SPREP for up to one year.

“These positions will support the Pacific Meteorological Desk Partnership and assist with the development of National Adaptation Plans, readiness work and project proposals for SPREP Member countries, and I think this is a crucial opportunity for young people because they have the energy required to carry out this work,” she said.

“There are also opportunities that exist within the newly opened Pacific Climate Change Centre, through a training programme spearheaded by the Japan International Cooperation Agency. This is open to youths from SPREP’s 21 Pacific island Member countries, but nominations have to come through each country’s government,” Ms Cooper said.

“We have also worked with Ms. Brianna Fruean, who was the SPREP Youth Ambassador for Climate Change, and through that partnership, she has been able to develop much experience and confidence in this space.”

Ms. Cooper also credited the success of the inaugural Pacific Resilience Meeting (PRM) held in Suva, Fiji earlier this year, in bringing forward a strong voice from the Pacific youth, which she thought was strategic in demanding attention, action and a place at the table

Ms. Cooper encouraged the youth of the Pacific to find something they are passionate about, and then pursue that passion relentlessly. She also encouraged young people to take any opportunity they can, no matter how humble, as those humble beginnings will shape them as professionals in the long run.

“There are a lot of youth ambassador roles and internships available but most of them are unpaid. What happens when these roles are unpaid is that only privileged youths whose families can support them while they undertake unpaid internships are able to occupy these spaces. We are disregarding a whole lot of youths who are interested in these opportunities but don’t have the financial means to undertake an unpaid internship,” said Ms. Fruean.

She urged organisations and NGOs and those in the private sector to open up more paid internships and opportunities for youths because “the will is there, but not the financial backing and sometimes something as small as a bus fare to town is not there.”

“It’s very unfortunate if a $2 bus fare is holding back one of the great youth leaders of our time,” she concluded.

Ms. Cooper and Ms. Fruean were on the Pacific Intergenerational Dialogue on the Climate Crisis side event panel, organised by the Pacific Islands Climate Action Network, held at the Moana Blue Pacific Pavilion.