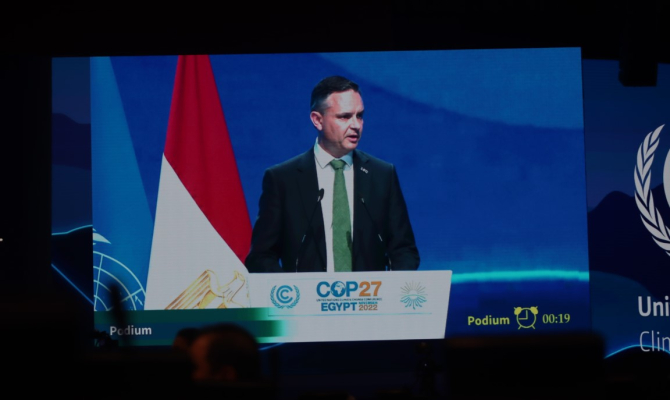 17 November 2022, Sharm el-Sheikh, COP27 - New Zealand has used its statement at the COP27 High-Level Session to appeal to 196 countries who are State Parties to the United Nations Framework Convention on Climate Change (UNFCCC) to ‘make progress on how to collectively manage loss and damage.”

James Shaw, Minister for Climate Change assured his country’s commitment to bold, enduring action in the fight against climate change, alongside its Pacific neighbours.

“As ever, it will be the most vulnerable who will be the worst affected. We cannot stand by and knowingly, willingly allow that to happen. Tackling climate change is a once-in-a-generation opportunity to build a future that is more equitable, more prosperous, and more innovative – and all within planetary limits.

Mr Shaw said Aotearoa New Zealand recognises that 1.5 degrees is critical to the survival of Pacific Island nations and their peoples.

“This COP27 must re-affirm our commitment to 1.5, to Paris and to the decisions we made in Glasgow. In our region, without adequate mitigation, we will not be able to adapt. And the losses and damages will be overwhelming and existential.

“This COP must make progress on how we collectively manage loss and damage. But it is only through collective action and shared commitments that we will rise to the challenge and take that opportunity. So let’s get to it, reiterated Shaw in his ministerial statement delivered Wednesday at the Sharm El Sheikh Congress Centre, the venue of COP27.

It is estimated climate change impacts have cost developing countries more than 800 billion in the past two decades and could rise to between 500b and 1 trillion a year by 2030.

Under Article 2.1.c. of the Paris Agreement on Finance, since Glasgow, New Zealand has passed a law that requires climate related financial disclosures from large listed companies and financial institutions, in line with the recommendations of the Taskforce on Climate Related Financial Disclosures.

“This morning we issued the first USD2 billion of Green Bonds to support our investment in the low carbon infrastructure we’ll need to support the transition to our next zero future.

He told the High-Level session that across the world, the response to the climate crisis must be inclusive of and supportive of indigenous peoples’ leadership.

“Mr President, we are running out of time. Do we want a world defined by the ravages of climate change? Or do we want a world that is cleaner, fairer, safer, and much more productive than it is today?

“The latest IPCC report shows that our collective commitments only add up to a 2.4-degree world. Go and ask a young person what they think of that choice – what they think about the future we are preparing for them. And brace yourself for the answer. Because they know, as do we, that a better world is possible.

They know we have the means at our disposal to create it. They know that all that we lack is the political will to make it happen. It’s time we heard that call. It’s time we moved to protect the climate at a speed, scale and urgency equal to the crisis itself, warned Minister Shaw. - By Makereta Komai, PACNEWS Editor in Sharm El Sheikh

Attendance of Ms Makereta Komi at COP27 is supported by SPREP and Irish Aid.