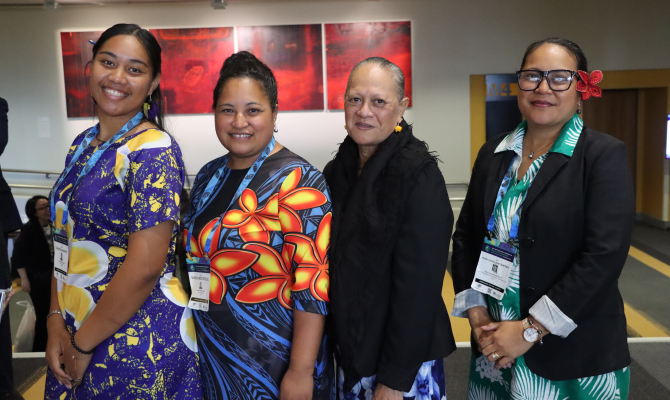 22 September 2022, Brisbane, Australia – Youth members of the Niue Girls’ Brigade have had the opportunity to attend and be exposed  to theglobal disaster risk reduction  forum  so they can share the learnings and seethe importance of the work they are doing in community-based early warning systems in their home country.

They were invited to attend the inaugural Asia-Pacific Ministerial Conference on Disaster Risk Reduction held in Brisbane, Australia.

The Boys’ and Girls’ Brigades in Niue were approached by the Niue Meteorological Services to implement the community-based early warning systems component of the Climate Risk and Early Warning Systems Pacific Small Island Developing States (CREWS Pacific SIDS) project, funded by the World Meteorological Organisation (WMO) and implemented by the Secretariat of the Pacific Regional Environment Programme (SPREP).

According to the Director of Niue Meteorological Services, Ms Rossy Mitiepo, they wanted to target the grassroots level when they approached the Girls and Boys Brigade.

“Traditionally we go through the village councils, but we wanted to go right down to the grassroot levels where we can engage communities and get them to support the high-level strategies from the national levels and also at the village level,” she said.

Through this partnership, the Met services were able to conduct valuable training to the members of the Girls’ Brigade. They learned of the different terminologies associated with climate science, differentiated between climate and climate change, and also received first-aid training from the National Disaster Management Office (NDMO)

“It was an eye-opening experience working with the Niue Met Service because it was our first time working with a government department,” said Ms Viano Motufoou.

“We got to learn a lot about the weather, early warnings, and disaster preparedness, and we were then able to go back to our communities and share this knowledge with the rest of our people.”

One of the activities they undertook was the developing of billboards to raise awareness on different aspects of the weather. Through this activity, the young girls learned about the different strengths of cyclones and the colour-coding system used by the Niue Met Service to classify tropical cyclones. They were also able to learn about the El Ninõ-Southern Oscillation and other areas related to weather and climate.

Ms Chantae Vakanofiti, Young Leader for the Girls’ Brigade, said that thanks to the training conducted by the Met service and also the billboards they worked on, she now understands what El Niño and La Niña are and how these events affect our weather.

“I gained a lot of knowledge and experience through this partnership that I will be able to use when I pursue further studies,” she said

The young women have also learned how to plant and harvest ufi, which is a climate indicator in Niue, and monitor them to learn how they behave during the cyclone season. This will ensure that this important traditional knowledge will be passed on to future generations to come.