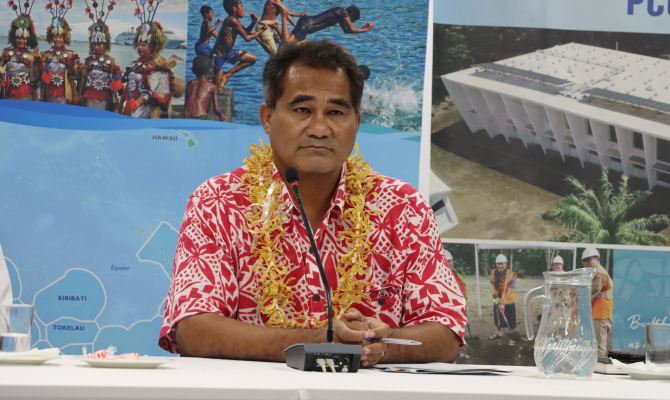 11 March 2022 - The findings of the latest report from the Intergovernmental Panel on Climate Change (IPCC) point to a “bleak future” for the Pacific, where people who have the least to contribute to the causes of climate change, live in fear of “catastrophic and extreme weather events.” Samoa’s Minister of Natural Resources and Environment, Hon. Toeolesulusulu Cedric Schuster, offered the reflection when he addressed a webinar to discuss the main findings of the report on Thursday, reiterating the call on the developed world for urgent climate actions.

Hosted virtually by the Pacific Climate Change Centre (PCCC) in partnership with the Institute for Climate, Energy & Disaster Solutions at the Australian National University (ANU), the webinar aimed to close the knowledge gap in the Pacific region around the work of the IPCC. But it was the findings of the IPCC WGII Report, which among other things point to Pacific nations being the most vulnerable and exposed to climate change impacts, that was most alarming.

“The IPCC report confirms that we are not on track to meet the Paris Climate Agreement. Based on all scenarios, we will see a 1.5degrees increase in global temperatures by 2021 to 2040, and will exceed this increase by 2041 onwards, reaching up to 3degrees in temperature increase by 2060 and, up to 5.7degrees at the end of the century using the highest emissions scenario,” Hon. Toeolesulusulu said during his keynote address. “For the Pacific, this means global heating above 1.5degrees will be catastrophic as sea levels will continue to rise, sea rise coupled with storm surges and waves will exacerbate coastal inundation and the potential for increased saltwater intrusion into aquifers, sea level rise will cause shorelines to retreat further along our sandy coasts, we will face more intense tropical cyclones, marine heat waves and ocean acidification will worsen and it will lead to the loss of entire countries due to sea-level rise within the century.”

The Minister reminded that the Pacific is viewed as the “canary in the coalmine” for climate change, having already suffered from king tides, disastrous storms, saltwater intrusion, droughts and gradual loss of low-lying areas to sea level rise for many years now. “The IPCC’s AR6 paints a bleak picture, sending an unequivocal message that human activities cause climate change and that the consequences of anthropogenic climate change is already upon us and is projected to continue and increase in severity and frequency,” Hon. Toeolesulusulu said. “The science is clear and the solution is simple – reduce green house gas emissions to stop climate change. Though the situation seems clear on the surface, the path to decarbonizing is complex and involves drastic behavioural changes, global cooperation and political will.”

“The report spelled out alarming consequences due to human-induced climate change which has caused dangerous and widespread disruption in nature and affected the lives of people around the world, in spite of our efforts to reduce the risks. The impacts are already pushing some human systems and ecosystems beyond their tolerance and adaptation limits,” Mr Latu said. “More worryingly, this IPCC report shows that the most vulnerable people and ecosystems will be the worst hit, and this speaks directly to the Pacific. Global heating above 1.5C will be catastrophic for Pacific Island nations and could lead to the loss of entire countries due to sea-level rise.”

Everyone has a part to play in taking urgent action against the climate crisis, SPREP’s Director General reminded. “We cannot afford any further delay. Climate change is the biggest threat to the wellbeing and livelihood of our Pacific people. If we choose to act today, it will shape how we can adapt as people to the increasing risks posed by climate change.” Mr Latu also shared a message from the Pacific to the world, especially the biggest emitters.

“The people in the Pacific are not passively accepting the adverse impacts. Pacific leaders have been calling for climate action and spearheading demands for stronger commitments,” he said. “We also united in our calls to keep global warming below 1.5C. We are pioneering innovative adaptation practices that are already being documented and replicated. As host of the Pacific Climate Change Centre, SPREP will continue to deliver on its mandate as coordinator of Pacific climate change action.”

The webinar, which was attended by more than 200 participants, was facilitated by Ms ‘Ofa Ma’asi-Kaisamy, Manager of the Pacific Climate Change Centre (PCCC). Professor Mark Howden, Director of the ANU Institute for Climate, Energy & Disaster Solutions and the Vice-chair of working group II Intergovernmental Panel on Climate Change (IPCC) report, spoke on the key findings of the report, which are relevant to the Pacific.

“The risks from climate change will keep on mounting as long as we have our foot on the greenhouse gas accelerator globally. Pacific Islands nations have been leading the call for emission-reduction action and climate adaptation for decades,” he said. “But they can’t fairly do this on their own – and nor should they be asked to. There are growing calls for developed countries to urgently dial up action on adaptation policy, finance and practice so that they keep pace with climate change. Developed countries must ramp up their emission reduction actions because while climate adaptation can take the edge off climate impacts in the Pacific, the IPCC report shows clearly that on its own adaptation will not be enough.”

SPREP and ANU have created seven factsheets which summarise the report's key findings for the Pacific. Visit: https://iceds.anu.edu.au/public-policy-outreach/ipcc-pacific/pacific-factsheets