Pacific islands speak in one voice on asbestos 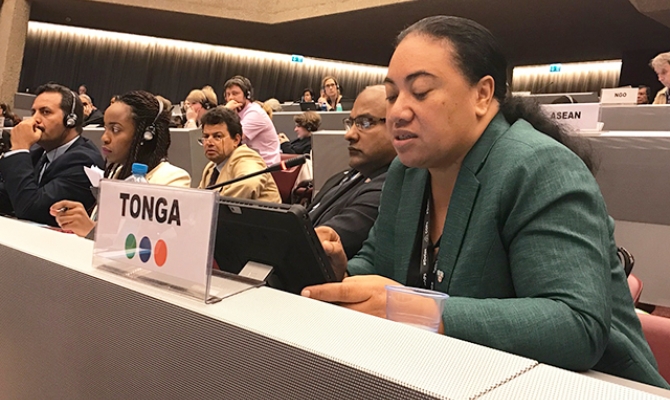 In Geneva today, Pacific island parties to the Rotterdam Convention joined together to speak in one voice on the issue of asbestos.

Ms Lupe Matoto, representing Tonga, addressed the plenary on behalf of Cook Islands, Samoa, Republic of the Marshall Islands and Tonga which, collectively, are the Pacific island Parties to the Rotterdam Convention. The intervention was also supported by Kiribati which was present at the Convention but is not a Party.

The Rotterdam Convention is a multilateral treaty to promote shared responsibilities in relation to the importation of hazardous chemicals. The Convention exists to help protect countries – particularly small island developing states – from unknowingly importing hazardous and toxic substances. 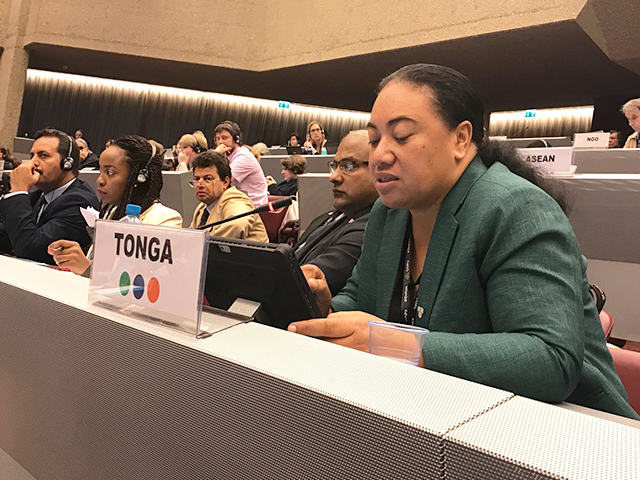 Pictured: Ms Lupe Matoto from Tonga spoke on behalf of all Pacific island Parties to the Rotterdam Convention to support the listing of chrysotile asbestos on the Annex III hazardous substances watchlist. Photo: A.Carvan/SPREP

Like all types of asbestos, chrysotile asbestos causes cancer, serious illness and death. Despite this, it is still widely used in building materials the largest users of which are developing countries in the Asia-Pacific region.

In their statement, Pacific island nations highlighted the low levels of awareness of the dangers posed by asbestos in the Pacific region, and urged Convention delegates to include chrysotile asbestos on the Annex III of the Rotterdam Convention, which would mean it cannot be imported without prior informed consent:

"Pacific island Parties to the Rotterdam Convention want to know and need to know when materials containing chrysotile asbestos are coming into our islands so that we can take appropriate measures to protect our communities."

There was very little information about asbestos in the Pacific region until the European Union-funded PacWaste project undertook a Pacific regional asbestos baseline survey in 2014.

PacWaste is a €7.85 million project funded by the European Union and implemented by the Secretariat of the Pacific Regional Environment Programme (SPREP) to improve regional hazardous waste management across the Pacific.

The survey found more than 187,000 square metres of confirmed non-residential asbestos across 11 Pacific island countries, 78% of which was classified as either high or moderate risk. The survey results, which were published in The State of Asbestos in the Pacific, also found evidence of new asbestos containing building materials being imported into the region. 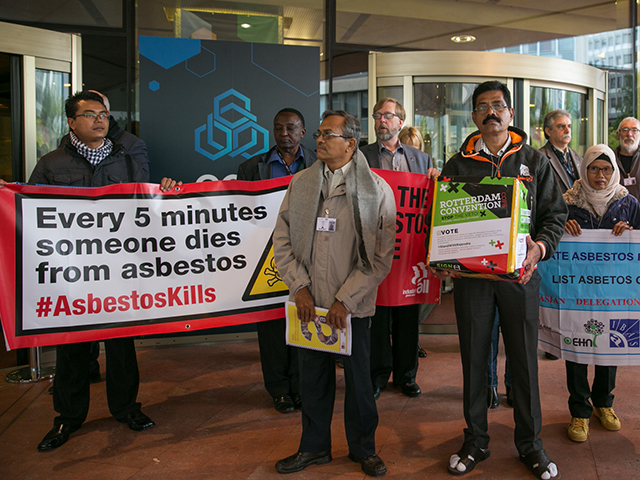 Pictured above: Members of the Global Asbestos Action Alliance demonstrate against the continued trade in asbestos outside the Rotterdam Convention venue in Geneva, Switzerland. Photo: IISD/ENB | Kiara Worth

Mr Jesús Laviña, Head of Section for Natural Resources and Infrastructure at the European Union Delegation for the Pacific, Suva believes that it is encouraging to see a united show of support on the issue of chrysotile asbestos from the Pacific island countries:

"Given the work being undertaken by PacWaste to reduce the legacy asbestos stockpiles in the Pacific region, it is important that we work to ensure that this progress is not jeopardised by the influx of new asbestos materials coming in to the region."

Currently, 59 countries have national asbestos bans, including all member states of the European Union. PacWaste Project Manager, Mr Stewart Williams, explains that no Pacific island countries currently have a ban in place:

"As markets for asbestos products shrink internationally, on account of the growing number of national bans, Pacific island nations become ever more vulnerable to being flooded by asbestos-containing building materials. This highlights the urgent need for island nations to take action on working towards an asbestos-free Pacific."