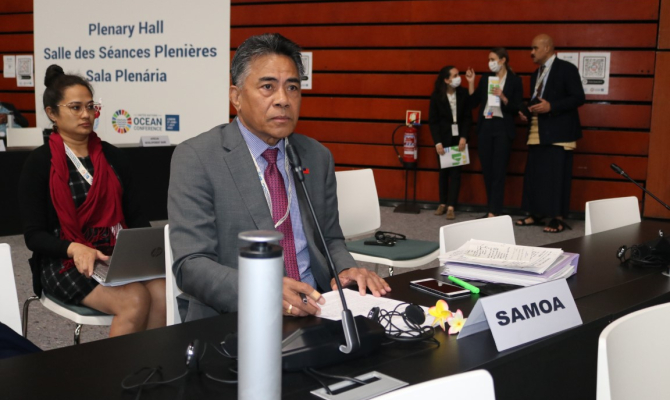 26 June 2022, Lisbon, Portugal, UNOC2022 - Uniting for a healthier ocean, the global community meet in Lisbon, Portugal for the Second UN Ocean Conference to take place from 27 June to 1 July.

Pacific Islands delegates have planned their engagement as a united body, eager to see commitments and action for the world’s ocean, the lifeblood of our Pacific region.

The ocean covers 70 percent of the Earth’s surface and is home to up to 80 percent of all life in the world. As the largest and deepest of the the Pacific Ocean covers around one-third of the Earth’s surface.  For many Pacific Islanders thecean is Pacific life.  It is the source of livelihoods, food security, coastal protection, and cultural practices and traditions.

Working together in coordination at the UN Ocean Conference 2022, the Pacific Islands have strategised their way forward across the week for an amplified Pacific Ocean voice.  The week ahead will result in new voluntary commitments announced to help achieve Sustainable Development Goal 14:  Life Below Water, as well as provide an update on the voluntary commitments that were launched for the First UN Ocean Conference in New York in 2017.

“It’s extremely important that we maintain a level of visibility as for us Pacific Small Island Developing States nothing is more important than our ocean.  We are part of the ocean, our livelihoods are determined and shaped by the ocean, as is our culture,” said H.E Fatumanava-o-Upolu III Dr Pa’olelei Luteru, the Permanent Representative of Samoa to the United Nations.

Samoa is also the current Chair of the Pacific Small IslandDeveloping States (PSIDS).

“We can go through a list of things and find that our cean plays a critical part in all, so this week we hope we can raise ocean issues that are important to us in the Pacific.  Our Ocean is one of the most underfunded Sustainable Development Goals, so we need to turn that round, bring light to that fact and drive cooperation and partnerships for a healthier Ocean.”

The theme of the Second UN Ocean Conference is “Scaling up Ocean Action Based on Science and Innovation for the Implementation of Goal 14: Stocktaking, Partnerships and Solutions” for which the Governments of Kenya and Portugal are co-hosting.

Across the week there will be a range of side events, plenary meetings, and interactive dialogues across eight different themes ranging from addressing marine pollution to managing, protecting, conserving and restoring marine and coastal ecosystems.

The Second UN Ocean Conference will result in a registry of voluntary commitments as well as a political declaration for ocean health.

“This lays a foundation upon which we can build.  We must see this as a process, the political decision is the start of something.  It is the beginning, not the end,” said Ambassador Luteru.

“We build upon it; we use this language and build upon the commitment and engagement from our leaders and start putting flesh onto it.  Let’s look forward.”

Pacific Islands delegations met before the UN Ocean Conference opened on 26 June to coordinate the best way for regional engagement that amplifies our Pacific voice on the global stage as we call for a healthier Ocean.  The Meeting was Chaired by Samoa with administrative support provided by the Secretariat of the Pacific Regional Environment Programme (SPREP).

Present at the PSIDS Coordination Meeting for the UN Ocean Conference 2022, a hybrid virtual and physical meeting were the Cook Islands, Federated States of Micronesia, Fiji, Republic of the Marshall Islands, Samoa, Solomon Islands, Vanuatu, Office of the Pacific Ocean Commissioner, the Pacific Community and SPREP.

For more on the UN Ocean Conference 2022 hosted in Lisbon, Portugal from 27 June to 1 July please visit https://www.un.org/en/conferences/ocean2022