Pacific voices at the centre of climate change documentary 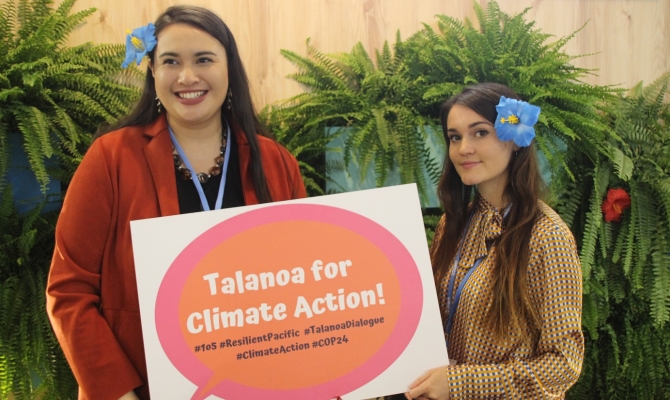 7 December Katowice, Poland – Two young women are the driving forces who created a film documentary titled ‘Subject to Change’ which highlights the climate change challenges faced by Pacific people in their region.

Among the most vulnerable to climate change impacts, Pacific voices were the centre of the documentary which premiered at UN’s Climate Change Conference (COP24) in Katowice, Poland, at the Pacific and Koronivia Pavilion.

Producer Ms Amiria Ranfurly, who is of Niuean-New Zealand descent, and Polish Director Ms Wiktoria Ojrzyńska, are students of Massey University of New Zealand. The young women chose to showcase climate change in their work because of the impact climate change has had within their region.

“We wanted to explore the impacts that climate change is having on our world, and "Subject to Change" is a documentary film that presents a collection of interviews and personal stories from across the Pacific,” said Ms Ranfurly. “With passion and determination, we have created a film that shares insight to New Zealand’s response to the global objectives set by the Paris Agreement, alongside intimate stories from the frontline in a truthful and evocative way.”

“Directing "Subject to Change" was an amazing storytelling experience, during which I worked with many inspirational people and gained experience across different aspects of filmmaking,” said Director Ms Ojrzyńska.

‘Subject to Change’ is a collaboration between Massey University of New Zealand and the Ministry of Foreign Affairs and Trade (MFAT) of the Government of New Zealand. Present to open the premiere was the Ambassador and Climate Change Special Adviser of the Government of New Zealand, with special guest speaker Hon. Inia Seruiratu, COP23 High Level Climate Champion of Global Climate Action, and Minister for Defence and National Security of Fiji who introduced the Director and the Producer of the film.

“Climate change remains the single greatest threat to the livelihoods, security and wellbeing of the Peoples of the Pacific,” said Ambassador Stephanie Lee. “Our Prime Minister Jacinda Ardern has described the climate change challenge as the Nuclear-Free Movement of our generation.”

“We have heard about the IPCC 1.5 degrees report and we already knew that it really underlines this challenge as an urgent one. The documentary you are about to see embodies that sense of challenge, but it also embodies a sense of hope,” said Ambassador Lee.

The documentary featured and drew strongly on the perspective of the Fijian people, particularly of those of the small island of Batiki with a population of around 300 people that was hit hardest by Cyclone Winston in February, 2017.

Hon. Inia Seruiratu thanked the Government of New Zealand and Massey University for coming together to support the documentary, as well as New Zealand’s support and partnership on the Pacific and Koronivia Pavilion where the premiere was being held.

Speaking about his experience as a Pacific islander, Hon. Seruiratu thanked the Producer, Director and the team behind the documentary for producing a powerful medium with which the voices of the vulnerable could be heard.

“People need to see and experience visually the realities others such as those in the Pacific are facing in order to better understand. And this is why this documentary is so important and serves as a great tool,” said Hon. Seruiratu.

The documentary can be viewed online or you can learn more about it and the team behind it at www.subjecttochangefilm.com.