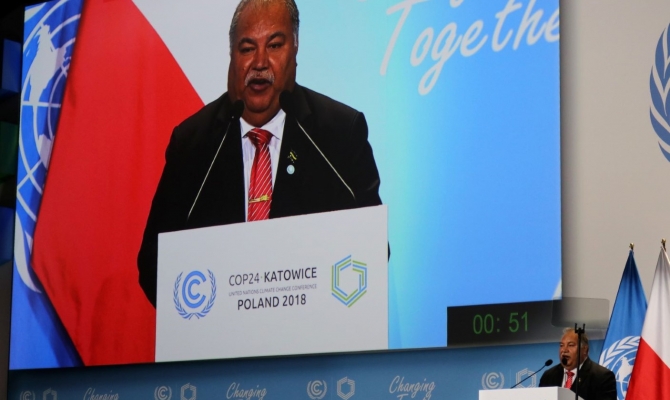 6 December 2018, Katowice, Poland - Leaders of the world have been called upon to “act now” by the President of Nauru, H.E Baron Waqa at the 24th Conference of the Parties to the UN Framework Convention on Climate Change.

President Waqa addressed the High Level Plenary at the UNFCCC COP24 in Katowice, Poland this week asking world leaders and conference delegates how they wish to be remembered?

“If we do not act now, then the next generation of leaders surely will. Global movements led by our youth demand it. They are walking out of their classrooms and occupying the offices of their elected officials. They are calling on countries to leave the fossil fuels in the ground, and instead, launch a Green New Deal supported by massively scaled-up public investments in the public interest. No longer content to gently nudge the system onto a marginally better path, our youth are poised to topple that system altogether,” presented President Waqa.

“Is that how we wish to be remembered?”

The UN Climate Conference in Poland opened with urgent and worrying tones.  The release of the Intergovernmental Panel on Climate Change Special Report on 1.5 released in October highlights the difference between a world in which global warming is limited at 1.5ºC in comparison to the impacts of a 2ºC world.

The Paris Agreement, a landmark agreement by the Parties to the UNFCCC in 2015 commits over 190 countries to keeping global temperature rise century well below 2ºC above per-industrial levels and even further to 1.5 ºC.

While only a .5 Degree difference, the effects are immense and they’ll reach everyone, not just the Pacific islands.  Up to 10.4 million more people would be exposed to sea-level rise at 2ºC compared with 1.5º in 2100.  At 1.5º some coral reefs will be able to adapt, while at 2ºC their chances of survival are next-to-none. This is why Nauru and all Small Island Developing States are advocating for the 1.5º target as a matter of survival.

Also released a week before the UNFCCC COP24 began was the UN Environment Emissions Gap Report which shows national commitments to reduce emissions are not enough to meet the goals of the Paris Agreement.

“This fact, revealed in the UN Environment Gap Report, should give pause to every person in this building. After a quarter century of negotiations, we are further away from our goal of stabilising greenhouse gas concentrations than we have ever been.”

More positively, both reports outline it is possible to achieve, if countries commit to ambitious reduction targets.  In 2020 Parties have committed to submit their next Nationally Determined Contributions (NDCs).

“Make no mistake, we must conclude the negotiations here at COP24 with urgency so that every country can prepare their next Nationally Determined Contributions with confidence,” said President Waqa.

“It is essential that the contributions presented in 2020 significantly raise the bar on ambition.”

President Waqa presented his statement to the High Level Plenary on 3 December, 2018.

The 24th Conference of the Parties to the UN Framework Convention on Climate Change is held in Katowice, Poland from 2 – 14 December, 2018.