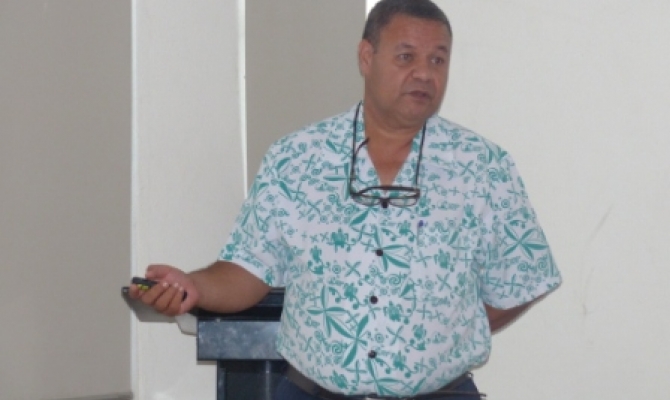 An overview of the elements of the Global Environment Fund's (GEF) Pacific unintentional POP's Release Reduction Project was held at the Pacific Environment Forum on Climate Finance today in Apia, Samoa. The purpose of the event was to provide details to the SPREP Member countries of the project's progress, and update participants on regional chemical and waste management training programmes associated with the project.

This GEF funded project of USD $3.035m over five years, initiated by the Secretariat of the Pacific Regional Environment Programme (SPREP), is being implemented in 14 Pacific island countries by the United Nations Environment Programme (UNEP) and the Food and Agricultural Organisation (FAO) with other partners being the Griffith University, Australia, Fiji National University, JICA and Agence Française de Développement (AFD), the French Development Agency. 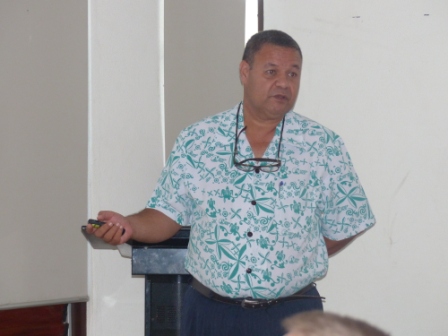 Dr Frank Griffin presenting at the side event.

Reducing persistent organic pollutants (POP's) emissions arising from poor solid and hazardous waste management practices, is one of the main objectives of the project. One of the largest sources of these pollutants is the open burning of green, organic wastes which is a common practice in many Pacific island back yards,

Stewardship and awareness-raising are two of the key components used to help reducing the release of POP's in the Pacific. Stewardship comes about through the development of national action plans in alignment with the Regional Waste Strategy. Community awareness raising and training is crucial as few people understand the issues, including many in the Pacific who work with waste.

Assisting Pacific states in developing best available practices (BAP) and best environmental practices (BEP), is what the project seeks to do in each of the countries, including the Cook Islands, Federated States of Micronesia, Fiji, Kiribati, Republic of the Marshall Islands, Nauru, Niue, Palau, Papua New Guinea, Samoa, Solomon Islands, Tonga, Tuvalu and Vanuatu.

The side event was held on the sidelines of the Fifth Pacific Environment Forum at the Tanoa Tusitala Hotel which took place before the Twenty-Sixth SPREP Meeting of Officials.

For further information on this project, contact Lusiana Ralogaivau at [email protected]