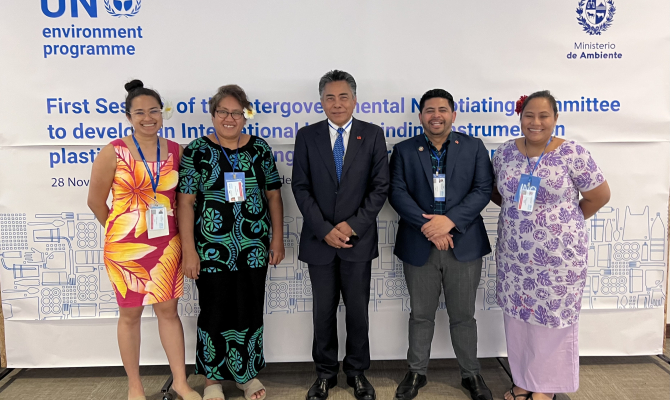 02 December 2022, Punta del Este - A new international legally binding instrument on plastic pollution must take a full life cycle approach. For this to happen, tracks must be established in the International Negotiating Committee (INC) for discussions on each stage of the life cycle.

Samoa raised the point during the plenary of INC-1 being held in Punta del Este, Uruguay. From 28 November to 2 December, representatives from governments, the private sector and civil society are working to develop an international legally binding instrument to end plastic pollution, including in the marine environment, a document they hope to finalise by 2024.

On Thursday, Ms Kathleen Taituave, of Samoa’s Ministry of Natural Resources and Environment (PSIDS), delivered a statement on behalf of the Pacific Small Island Developing States (PSIDS) during the discussion dealing with sequencing and recommended further work to be undertaken.

“In our view, the new international legally binding instrument on plastic pollution, including in the marine environment, must reflect more than high-level ideals of sustainable production, product and material design and transparency and traceability,” Ms Taituave said, adding that the full life cycle approach must be dealt with in tracks.

A life-cycle approach to plastics considers the impacts of all activities and outcomes associated with producing and consuming plastic materials, products, and services. This approach is key to enabling the global systemic change and collaboration that experts say are needed to curb plastic pollution.

Samoa recommended that the tracks could include Upstream, Midstream, Downstream, Means of Implementation, Institutional Arrangements including a governing body and subsidiary bodies such as a Scientific, Economic, and Technical Body, National Action Plans, Compliance, and Objectives and Definitions.

“There might be some degree of overlap between these tracks, as each stage of the life cycle of plastics could be addressed by and through multiple elements of the instrument,” said Ms Taituave.

“In any case, to the extent possible, the scheduling of negotiations in these tracks must avoid over-burdening small delegations like those of the Pacific SIDS with more than two tracks, if possible. We would also note that online access has been beneficial and we would encourage that this continue to further enable inclusive access. If multiple in-person tracks are envisaged, adequate consideration and support for SIDS must be provided to enable  our participation.” 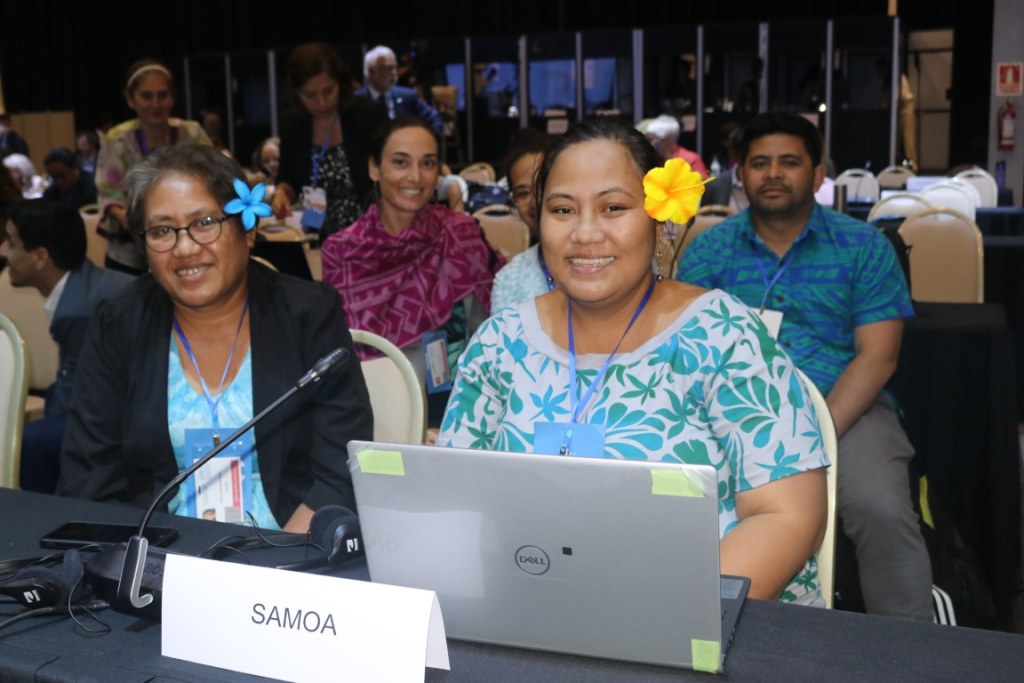 At the UN Environment Assembly earlier this year, Samoa was among 175 countries that agreed to begin negotiations on a UN treaty on plastic pollution. With projections that plastic pollution is set to rapidly increase by 2040, the ground work is being laid in Punta del Este this week.

The INC offers a chance for stakeholders to attend and put across their views on what the treaty should be. Samoa is among Pacific countries amplifying our Pacific’s voice for a legally binding treaty which should aim to end plastic pollution.

According to Ms Taituave, national action plans will be core to the implementation of the agreement.

“National action plans must set out the specific policies and measures taken, or to be taken, to comply with the obligations and other related commitments under the instrument. This negotiation track will contribute to elaborating provisions for  the  delivery of financial and technical assistance for the preparation and implementation of national action plans, for example through a financial mechanism, which could include a dedicated multilateral fund.”

“To ensure a global ‘level playing field’ we also suggest the establishment of intersessional mechanisms to discuss the important issues raised earlier.”