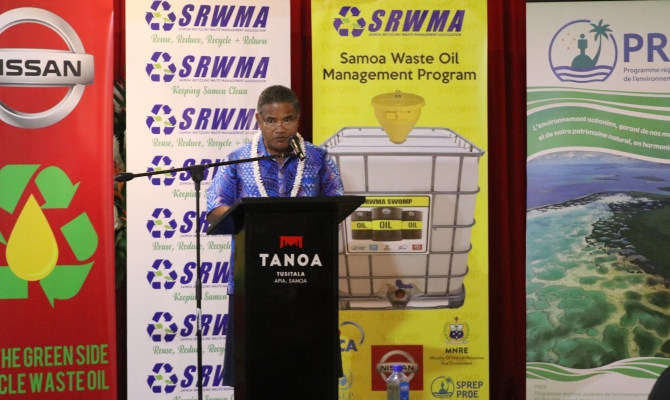 30 August 2019, Apia, Samoa - A unique pioneering initiative for the proper management of hazardous waste in Samoa, specifically waste oil, which promotes regional collaboration for providing long term solutions to waste management difficulties was launched at the conclusion ceremony of the meeting of the 15th Conference of the Parties (COP) Noumea Convention and the Informal 10th Waigani Convention.

The Hon. Taefu Lemi, Associate Minister for the Ministry of Natural Resources and Environment (MNRE), who officially launched the programme, expressed his excitement on the significance and positive impacts to the environment and more importantly to the people with the commencement of the programme envisioned by end of 2019.

“The initiative will bring together importers, sellers and users of engine oils and other hazardous fluids to share costs of managing the resulting waste oil and fluids, in line with Samoa’s obligation to regional and international agreements and conventions,” said the Hon. Minister. 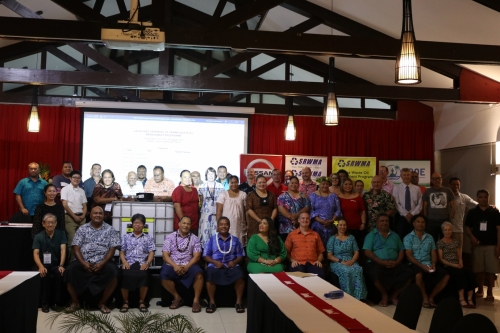 To support the success of the program a $0.20 sene fee will apply to every litre of waste oil collected which will aid in the sustainability of the programme and the continued export of waste from the region.

Through this program collected waste oil will be exported from Samoa and will be used as an alternate energy source, to provide fuel for another waste industry, by the Blue Scope Steel Factory in Fiji to smelt the large volumes of waste scrap steel, reducing the demand on new fuel resources.

A funding assistance for the provision of one hundred, 1000 litre International Bulk Containers (IBCs) and supplementary equipment to the programme was provided by the Secretariat of the Pacific Environment Programme (SPREP).

The assistance was made possible through the Pacific Persistent Organic Pollutant (POPs) reduction project that is funded by the Global Environment Facility and implemented by the United Nations Environment Programme (UNEP) and the Food and Agriculture Organisation (FAO).

This public private partnership for waste management, which not only addresses the proper collection and storage of used oil but also its disposal, is driven by the Samoa Recycling and Waste Management Association (SRWA) in partnership with MNRE, SPREP, Swire Shipping and spearheaded by Nissan Samoa with support from UNEP, and the Japan International Cooperation Agency (JICA).

Shipment of the waste oil has been made possible through the Moana Taka partnership with Swire Shipping that commenced 18 months ago with 26 containers of low value and non-commercial waste products exported from Pacific island countries.

At the launch, Pacific island countries and territories were encouraged to implement more regional collaboration by using the oil management programme, which has been acknowledged as a regional waste management model.

The 29th SPREP Meeting of Officials is being held at the Tanoa Tusitala Hotel in Apia, Samoa from 3 - 6 September. The Meeting will bring together SPREP’s 21 Pacific island Members countries and 5 Metropolitan Members to discuss strategic issues pertaining to the organisation, and to approve the 2020-2021 work plan. The Environment Ministers’ High-Level Talanoa will be held on Friday 6 September.