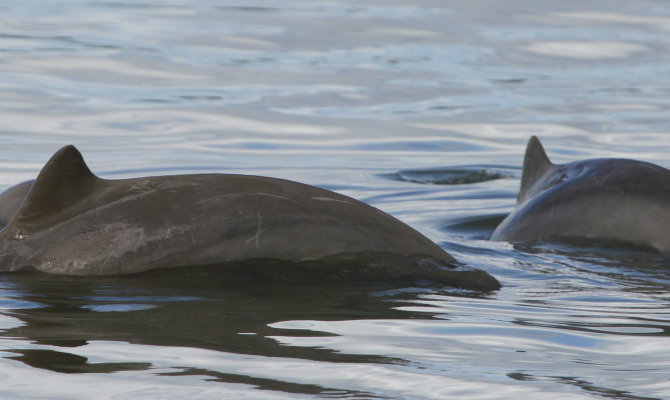 The Pidu Project is monitoring two species of endangered inshore and river dolphins in the Kikori Delta of the Gulf Province in Papua New Guinea: the Australian humpback dolphin and the Australian snubfin dolphin. Across the Kikori Delta they are commonly called Pidu in local languages and it is the only location in Papua New Guinea where these dolphin species have been documented. Both species are listed as Vulnerable on the International Union for Conservation of Nature (IUCN) Red List and Kikori Delta was designated as an Important Marine Mammal Area for the two dolphin species by IUCN in 2018. The only other populations of these species are found in northern Australia, where they are protected.

Local communities in the Kikori Delta are working closely with researchers to help monitor and conserve the two endangered inshore dolphins. This work is being supported by the By-catch and Integrated Ecosystem Management (BIEM) Initiative implemented by the Secretariat of the Pacific Regional Environment Programme (SPREP), under the Pacific-European Union Marine Partnership (PEUMP) Programme funded by the European-Union and the Government of Sweden.

The dolphins are facing threats from fishing nets placed into the water by local fishers to catch big fish for the recent and lucrative fish maw (swim bladder) fishery. Six fishers from six villages across the Kikori Delta have been trained to monitor for dolphins and their incidental capture. Three of these fishers, assisted by their communities, have been monitoring the areas around their villages since November 2021.

Information recorded between November 2021 and May 2022 shows that 74 dolphins have died as a result of accidental capture, or by-catch, in fishing nets with the majority of dolphins caught being the Australian snubfin dolphin. The current rate of capture is alarming, creating concern for the survival of these dolphins within the delta.

In an attempt to reduce dolphin by-catch, local fishers and the community will be assisting the Pidu Project to develop and trial fishing practices that might lessen dolphin capture later this year.

The efforts of villages to assist the Pidu Project protect the dolphins is being supported by local NGO, Piku Biodiversity Network, the PNG Conservation and Environment Protection Authority (CEPA), PNG National Museum and Art Gallery, and local government and communities across the Kikori Delta.

Ms Yolarnie Amepou, Director of the Piku Biodiversity Network stated, “We commend the efforts of the villages across the Kikori Delta to assist in collecting information on the state of the dolphin in their waters. We thank CEPA for their support and SPREP, the European Union and Government of Sweden for providing financial support imperative for this work to occur. Information provided has demonstrated the need for conservation action as soon as possible to prevent a local extinction, which at this time is a very real possibility. This is not a task that can be undertaken by fishers, villagers and researchers alone, it needs a collaborative effort not just for today but also for the long-term sustainability of community-led conservation actions.”

Councillor Sulabi Baigu, West Kikori Local Level Government Vice President, whose village is one of those leading conservation action, has expressed his appreciation to partners for the opportunity given to his community to participate in efforts to protect the dolphins. “The efforts to protect Pidu have been happening for a few years. I am very happy with the Piku Biodiversity Network and the Pidu Project Team. With your efforts to enable my village’s participation, we have seen your contribution to the community, and this is good. The people are looking forward to continuing this work and efforts to protect our species, not just dolphins, but turtles and other species as well, so our children still coming can also enjoy the natural environment and all that it provides us.”

Councillor Baigu, however, also noted that the task to conserve the threatened dolphin populations is a challenge that his village and local government cannot manage alone and need additional support from relevant national authorities. “We cannot continue to record dolphins dying, we need solutions to stop dolphins getting caught in nets. How can our communities get assistance for us to protect the dolphin as well as our livelihood? We do not have these answers and call upon our National Agencies and counterparts in government to assist us with relevant laws and policy if necessary.”

This collaboration between local fishers, villages, researchers, NGOs and the Government to protect the two dolphin species from being severely impacted by local fishing shows how community-led conservation action is possible and may be the fastest solution to protecting threatened species in Papua New Guinea.

The Secretariat of the Pacific Regional Environment Programme (SPREP) is the premiere intergovernmental regional environmental organisation of the Pacific, with 21 Pacific Island Members and five metropolitan Members.  SPREP’s mandate is to promote cooperation in the Pacific region and provide assistance in order to protect and improve its environment and to ensure sustainable development for present and future generations.  SPREP’s core priorities are Climate Change Resilience, Ecosystem and Biodiversity Protection, Environmental Governance, and Waste Management and Pollution Control.  It is guided by its vision for the future: “A resilient Pacific environment, sustaining our livelihoods and natural heritage in harmony with our cultures.”  For more please visit www.sprep.org