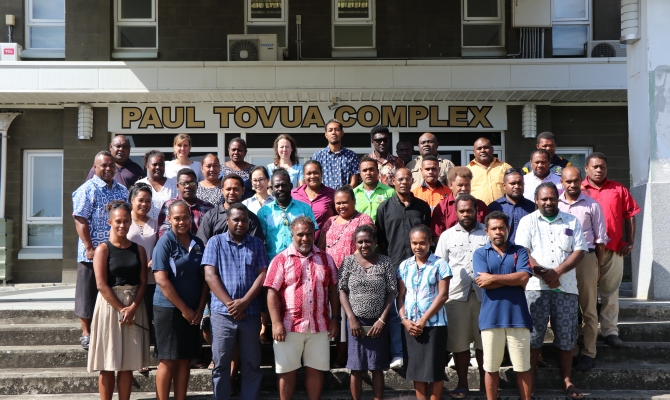 The Environment and Conservation Division (ECD) of the Ministry of Environment, Climate Change, Disaster Management, and Meteorology (MECDM) in partnership with the Secretariat of the Pacific Regional Environment Programme (SPREP) coordinated the  workshop.

More than 40 national stakeholders attended the SoE and NEMS validation workshop including ECD staff, representatives of the mining sector, and environmental organisations such as World Wildlife Fund, The Nature Conservancy, International Union for Conservation of Nature, Live and Learn, and development partners, the United Nations Development Programme and the Japan International Cooperation Agency.

In his opening remarks at the workshop, MECDM Under Secretary Mr. Chanel Iroi stressed the importance of the SoE and NEMS documents as robust planning tools, and why it is critical to ensure accurate and current data is used to describe an environment indicator.

“The SoE document has baseline data on environment indicators showing their current trend and status and whether it is improving or declining.”

Mr. Iroi also stated that preparing a Status of Environment Report is a requirement under the Environment Act 1998.

Prior to the validation workshop, the SPREP team met with MECDM Permanent Secretary, Dr. Melchior Mataki who expressed optimism that there is now a heightened consciousness of the environment amongst the local population.

Addressing environment issues is not just for the environment sector but is cross cutting to mining, health, food security, marine and coastal, plus other sectors and partners. He made reference to the findings of the Solomon Islands draft SOE findings during the United Nation Environment Assembly  held in Nairobi this year wherein 17 of the 28 environment indicators showed declining trends.

Mr. Jope Davetanivalu, SPREP Environment Planning Adviser, led the validation workshop with the support of Ms. Julie Callebaut and Mr. Emile Adams. He informed that the final draft of the SoE and NEMS will be presented to the Permanent Secretary and Minister of MECDM at the end of the validation mission.

The SoE report and NEMS will guide decision-makers, government ministries, provincial governments, development partners, environment organisations, and the private sectors to improve environmental planning, monitoring and reporting. A communications strategy will also be developed to guide awareness raising activities of the two documents for decision makers. One of the key objectives of the communication plan is to ensure that the SoE and NEMS are treated as living documents and that they are used effectively to support planning, reporting and decision making at all levels.

During the workshop, participants formed themselves into groups to review the environmental indicators for the seven SoE thematic areas: Biodiversity, Atmosphere and Climate, Culture and Heritage, Coastal and Marine, Freshwater Resources, Land, and Built Environment. Comments were noted and gaps in data were identified and sourced.

The Environment Data portal which was established as an output of the UNEP-GEF Regional Inform Project executed by SPREP was again highlighted as an effective and useful tool for storing and accessing environment and related data and information to support the preparation and monitoring of the SoE report as well as meeting Multilateral Environment Agreements (MEAs) and other key commitments such as national sustainable development plans and the SDGs.

The validation workshop will end on Thursday, 30th May, with a final draft of the SoE Report and NEMS.