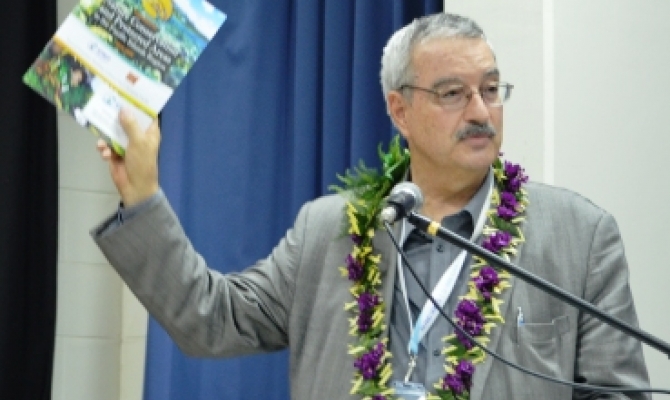 Island and Ocean Ecosystems
2 December 2016, CBD COP13, Cancun, Mexico – The Secretariat of the Pacific Regional Environment Programme (SPREP) congratulates Ms Cristiana Pasca Palmer, announced as the incoming Executive Secretary of the Secretariat of the Convention of Biological Diversity. She will succeed Mr Braulio Ferreira de Souza whose term comes to an end in February next year.

Fourteen Pacific islands are part of the 195+ countries that are parties to the Convention of Biological Diversity,a multilateral environment agreement which aims to conserve biodiversity, ensure sustainable use of the components of biodiversity as well as the fair and equitable sharing of the benefits arising out of the utilisation of genetic resources.

Entering into force in 1993, the Secretariat has worked with SPREP and partners to help halt the loss of biodiversity. The CBD also has an Island Biodiversity programme of work.

"We have had a close working relationship with Mr Ferreira de Souza during his term as Executive Secretary, collaborating on work that has helped empower and enable our island member countries meet their obligations under the CBD," said Mr Kosi Latu, Director General of SPREP as the High Level Segment of the Thirteenth Conference of the Parties to the CBD (CBD COP13) in Cancun today. 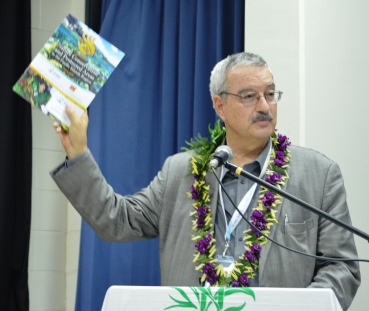 Mr Ferreira de Souza at SPREP in 2014
"It was our honour to host him at SPREP in 2014 when he launched our Pacific Island Framework on Nature Conservation and Protected Areas, we have also collaborated with the Secretariat on many other different activities with our Pacific islands as they work towards achieving the Aichi Targets."

For the Pacific islands, biodiversity is crucial. The Pacific region, one of the most biologically rich regions on Earth, covers 32 million square kilometres and contains 30,000 islands that make up the region's two per cent of land.

The large expanse of ocean supports both an extensive and diverse coral reef, the deepest oceanic trenches and the healthiest population of many globally rare and threatened migratory species including whales, sea turtles and dugongs.

The Pacific is also home to a high proportion of endemic plant and animal species.

Much work has been done to help protect this island biodiversity, just this year new announcements of the large Marine Protected Areas in the Pacific now sees the Pacific island region making substantial progress overall in achieving Aichi Target 11 with respect to marine protected areas, ensuring at least 10 per cent of coastal and marine areas are conserved. At an individual level however, SPREP island members have developed national roadmaps to assist them in reaching this target.

"We look forward to continue working with the CBD Secretariat with Ms Palmer at the helm, strengthening our relationship which will ultimately lead to an enhanced and resilient island biodiversity," said Mr. Latu.

"Many good outcomes have been achieved as we work together to protect our biodiversity, and we know this can only continue to approve in the years ahead."

For more information on the CBD COP13 please visit: http://cop13.mx/en/