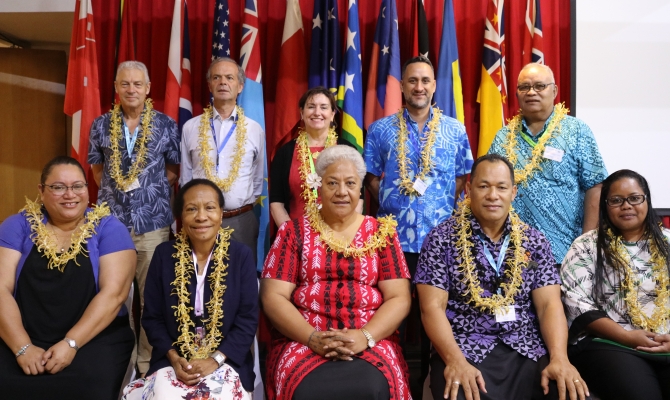 The Secretariat of the Pacific Regional Environment Programme (SPREP) is hosting its first ever SPREP Executive Board Meeting (EBM) in Apia this week. The EBM replaces the larger SPREP meeting of officials, after members made the decision in 2016 to shift the larger SPREP meeting to be held biennially, with the EBM to be held in the alternate years.

“This morning is yet another milestone achievement by SPREP after 25 years of establishment. As host country for the Secretariat and the Pacific Climate Change Centre which is currently under construction at the SPREP campus, the Samoan government maintains its commitment to sustainable environmental development.”

The Deputy Prime Minister reminded the Executive Board members of the importance of the SPREP mandate, which is to promote cooperation in the Pacific region and provide assistance in order to protect and improve its environment and to ensure sustainable development for present and future generations.

SPREP Director General, Mr Kosi Latu noted, “This first SPREP Executive Board Meeting is an important new governance arrangement for SPREP as requested by our Members to improve our efficiency and effectiveness, but is equally as important for SPREP in reflecting on our 25 years of service to the region since the signing of the SPREP Treaty in 1993 for navigating our course ahead .”

In his opening remarks, Mr Latu spoke about how the SPREP mandate is now at a critical juncture as the environment is coming under ever increasing pressure.

“In this short period of time, we have witnessed the increase of unprecedented waste and pollution pressures from human induced activities such as industrial and agricultural run-off, marine debris, oil and chemical pollution, population growth, coastal development and modernisation, over-fishing and resource extraction.”

“These pressures have been exacerbated by the challenges of climate change, extreme weather events including storms and droughts. The impacts of these activities threaten our environment, social and economic resilience.”

The Director General thanked SPREP members and partners for their continued support for the work of the Secretariat, He also thanked the Government of Australia and New Zealand for their multiyear funding support, and the financial support committed by all SPREP members, which ensures that SPREP is able to be a dynamic and responsive organisation to meet the environmental needs and aspirations of the Pacific region.

The eight members of the SPREP Executive Board arrived in Apia over the weekend ahead of the two day meeting this week. They include the Troika of past and present chairpersons of the SPREP Meeting, with H.E. Ms Lucy Bogari of Papua New Guinea as the incoming Chair, Ms Gwen Sisior of Palau representing the outgoing Chair, and Dr Josie Tamate of Niue as past Chair.

The meeting will be held over the course of two days, from 10 – 11 September at the Tanoa Tusitala Hotel main conference room.  The 2017 SPREP Annual Report will be tabled at the meeting, which will outline the highlights of SPREP’s work in the region over the past year. The 29th SPREP Meeting will convene in Samoa in 2019.